What Do Those Rod Actions Really Mean? 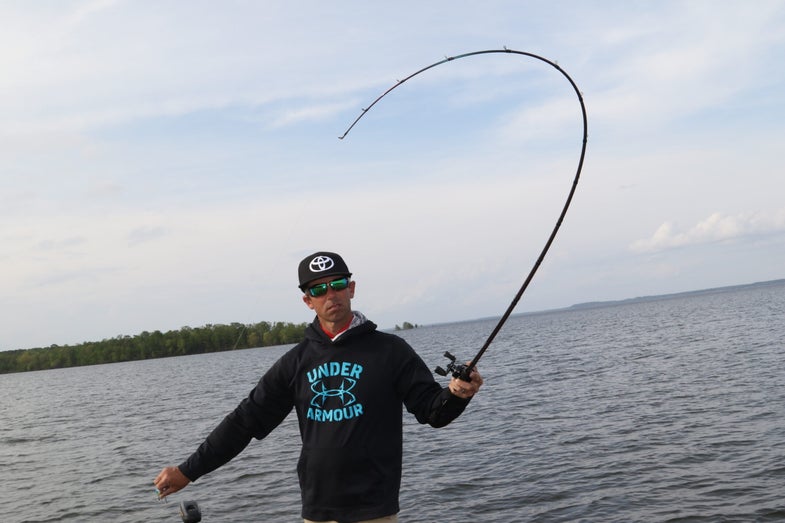 A bass rod need not be broomstick straight. David A. Brown
SHARE

Fact is, experienced anglers often put their faith in rods with a more pronounced parabolic action — meaning, they bend from the tip to the butt section. Displaying a distinctive “C” shaped bend on the back cast and the hook set, a parabolic rod evenly distributes the pressure throughout its blank for optimal efficiency.

For clarity, two commonly confused rod specs are power and action. The former generally refers to a rod’s overall strength (light, medium, medium-heavy, heavy, extra-heavy), while the latter addresses its bending properties. Action is also sometimes expressed in terms of how much tip a rod has. By that, we mean how much of the rod bends versus how much remains rigid.

Second, as bass pro Mike Iaconelli notes, parabolic rods create a buffer that allows a fish to get the bait. A stiff rod exerting immediate pressure can actually pull the bait away from a fish before the hooks stick. Conversely, the parabolic rod’s deep bend steadily builds the hook-setting pressure so the fish hangs on longer.

Also, bass pro Kevin VanDam prefers a parabolic rod for punching soft plastics into heavy cover. Here, many assume that a broomstick rod is your best bet for pulling fish out of the slop, but VanDam says not so.

“I typically use 65-pound braid, a Strike King Rage Bug with a 4/0 Mustad Grip Pin Max flipping hook and a 1 1/2-ounce Strike King tungsten weight to get through that heavy cover,” he said. “Instead of setting the hook on a fish, I’ll just pull into the fish, let that rod load and let the fish fight itself within that cover. That way, I’m not bringing them up to the boat hot.”

Maintaining pressure on the fish, but allowing it to gas out below the mat lessens the chance of it throwing the hook above the cover. Also, VanDam points out that the parabolic rod’s smooth, even pressure is less likely to widen the hook hole in a fish’s mouth — a common fish-losing vexation born of an overpowered heavy cover flipping game.

Parabolic rods won’t fit every fishing scenario, but these deep-benders deserve a spot in your arsenal.