Use Blade Baits and Spoons to Catch Winter Bass 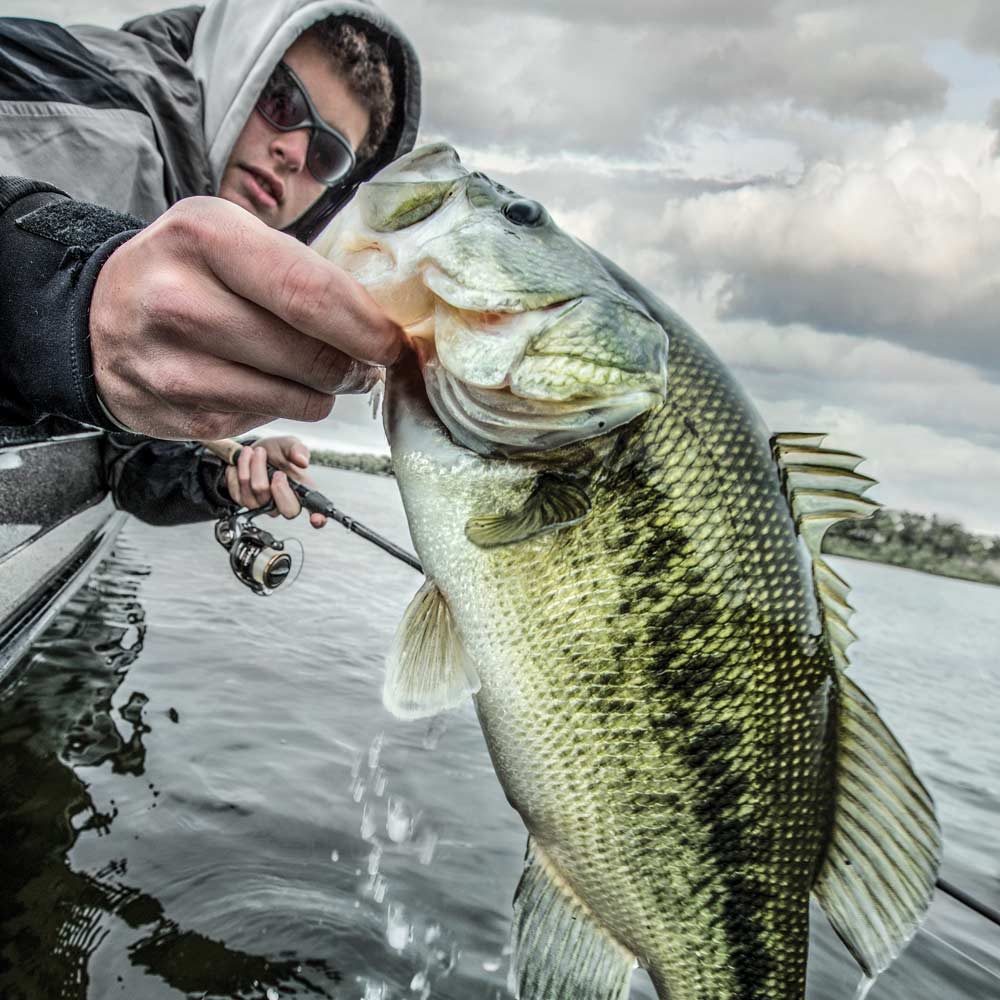 For bass anglers, winter offers neither the massive shallow migration of spring, the shorts-and-flip-flops appeal of summer, nor the feeding frenzies of fall. It’s a time of slow metabolisms—for fish and fishermen alike—and long periods of inaction. What the coldest months do offer hardcore bass anglers is a chance to hit massive concentrations of fish. Schools of bass will congregate in limited areas, and because they have to eat at some point, a smartly presented lure that promises a punch of protein will get gobbled. Slow-crawled grubs, bulky jigs, and suspending jerkbaits can all score when ice forms in your guides, but it’s hard to beat an unnatural-looking hunk of metal. Here’s how two high-ranking bass pros drop the hammer on winter bass.

Come winter, Texas pro Keith Combs is glued to the electronics. He’s been known to idle around in creek channels and over other structural elements for hours and sometimes days just looking for groups of shad without ever making a cast. “In the fall, the shad are in all levels of the water column,” Combs says. “But in the colder months, they relate to the bottom. When I ­finally mark a school that has bass on it, it’s time to fish vertically.”

His key tool is a no-frills ½- or ¾-ounce jigging spoon—just a plain gold or silver hammered slab of metal. A classic Hopkins fits the bill perfectly.

“It doesn’t have eyes or scales, but it works better than anything that looks like a more realistic baitfish,” he says. He’ll add a swivel to the nose and typically replaces factory trebles with super-sharp Owner ST 35 models.

Until he pinpoints the sweet spot within the school, Combs will only make short flip casts so the spoon is never too far away. The idea is that if he sees a bass directly below him on his graph, or on the rare occasions when he sees them busting the surface, he can drop straight down or cast to the busting fish quickly. When fishing vertically, Combs lets the spoon fall to the bottom, hops it, and then lets it fall on a semi-slack line. Many of the strikes will come as the lure wobbles down, and he won’t feel the fish until he goes to lift again.

“You want to keep steady tension on the fish when you’re hooked up,” Combs ex­plains. “Very seldom do they have more than one of the hooks, and there’s a lot of weight flopping around. That’s why I recommend a medium or medium-heavy parabolic rod with a lot of tip and a fast reel to catch up with them when they start swimming up.”

The water typically gets colder on New Jersey pro Pete Gluszek’s home turf than it does where Combs lives, and that means the bass typically slow down and bunch up even tighter. When surface temperatures dip below 50, he turns to blade baits like the Heddon Sonar or Silver Buddy.

“When the bass stop biting jigs, crankbaits stop working, and you don’t get anything on a drop-shot, blade baits still trigger strikes,” Gluszek says. “And when the fish are on them, nothing else in your tackle box will be as effective.” Gluszek fishes a blade bait like a jig, dropping it to the bottom and then moving it a few inches to a foot at a time. “Guys tend to overwork blades,” Gluszek says. “Short hops catch more winter fish. I just lift until I feel it vibrate, then kill it and let it fall to the bottom.”

Gold is his number-one color choice, but he also likes white and perch-pattern blade baits, particularly on tidal waters. He’ll fish them in the same places he fishes a jig, including docks, rocky banks, seawalls, and barge tie-ups. Some anglers jig a blade bait on straight braided line to maximize response time, but Gluszek believes that results in too many snagged fish. He prefers either 10-pound Gamma Torque Braid with a leader of 10-pound Gamma fluorocarbon, or straight fluoro­carbon. To ensure that head shakes or modest jumps don’t dislodge the lure, Gluszek adds split rings to the hooks on all his blade baits to provide more freedom of rotation.