Elk Hunting’s New Frontier: How and Where to Draw a Bull Tag in the East

One time or another we’ve all dreamed of tagging one of those humongous bull elk with a butt-scratcher rack. Spending... 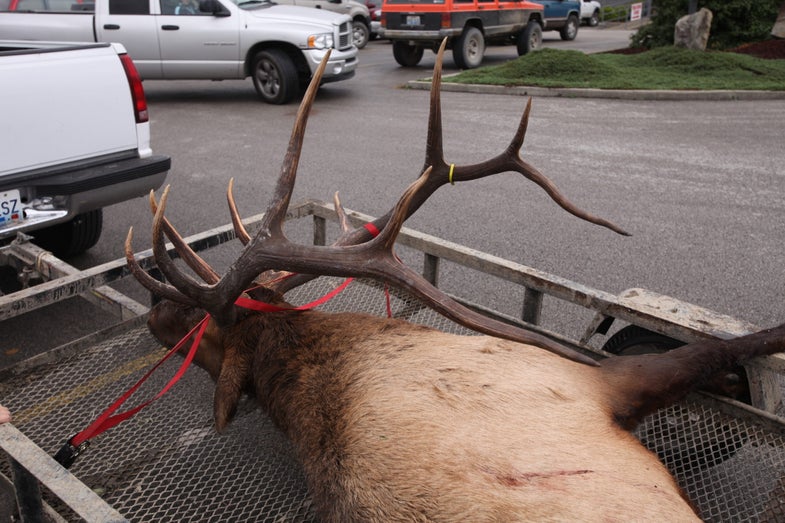 One time or another we’ve all dreamed of tagging one of those humongous bull elk with a butt-scratcher rack. Spending the money it takes to go on a classic Western hunt to New Mexico or Montana is out of reach for most of us. However, if you’re a hunter in the eastern United States, the day is coming when you won’t have to spend a fortune to secure a reasonable chance of bagging an elk; in some places not far from home, that day is already here.

If you draw a permit in one of the states listed here, your chances of tagging an elk are quite good, and might be described as exceptional if you draw a cow tag. The bad news is that each year there are at least 25,000 other Eastern hunters who want an elk-hunting permit just as much as you do. The odds aren’t as bad as, say, having a chance to win $50 zillion in PowerBall, but they’re not exactly favorable either. Still, nothing ventured, nothing gained. It’s money well spent, too, because all the funds raised are used in various elk restoration projects. 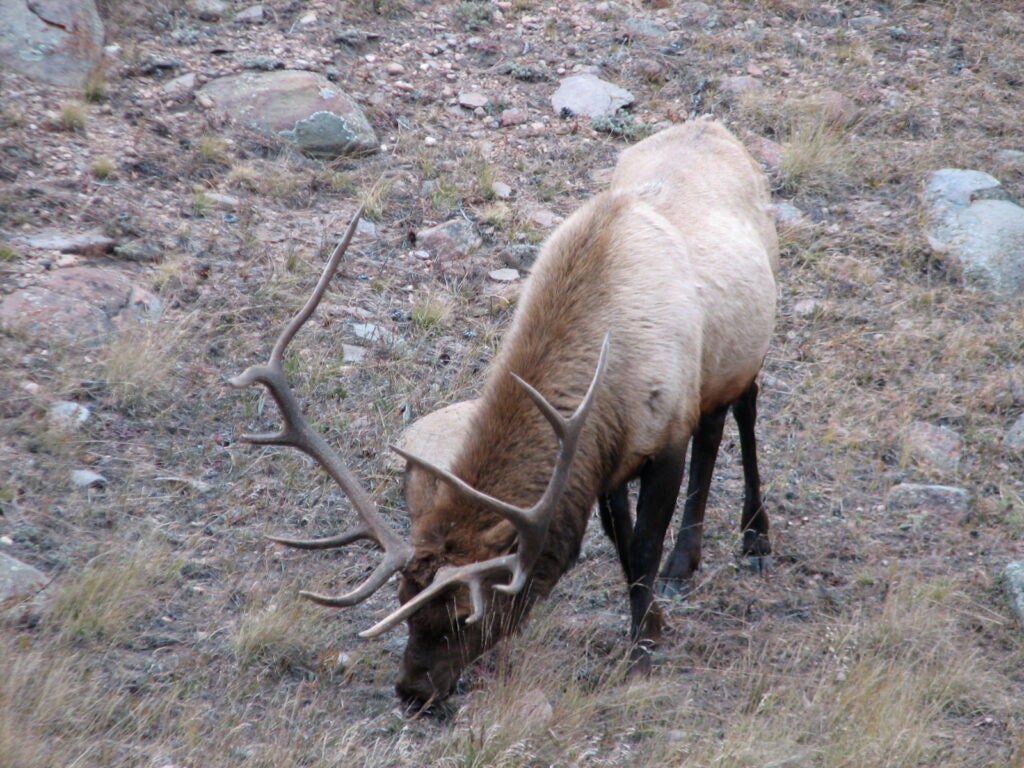 Elk, or wapiti, roamed most of the land east of the Mississippi River when the first white settlers arrived. Efforts to return them to their historic ranges in eastern states are proving to be more successful than first anticipated.

ARKANSAS
Hurry if you want to hunt elk in Arkansas this winter. The permit application period for public lands has already come and gone (May 1-June 1) and ends for private lands on July 15. The one and only elk zone for private land is in Boone, Carroll, Madison, Newton, and Searcy counties. It costs $35 to apply for one of the 12 bull and 24 antlerless permits available. The Arkansas herd is estimated at less than 1,000 animals, mostly scattered across private lands in the wild Ozark region of the north. Visit the Arkansas Game and Fish Commission site for more info.

PENNSYLVANIA
The state’s on-again, off-again efforts to resurrect its elk herd are on the front burner again. As conservationists discovered when an effort was made to stock elk in the rich agricultural lands of western Kentucky, farmers and elk don’t get along too well, and farmers can vote. Agricultural interests in Pennsylvania fought against restoration efforts for several decades, until various compromises more or less ensured that elk would stay away from most farmlands. Pennsylvania’s restocking program has forged ahead and now hunting is allowed on public lands in the north-central part of the state.

Pennsylvania’s first elk hunt in modern times took place in 2001 when 30 pemits were issued. This year, 21 antlered and 95 antlerless permits will be issued after a drawing that takes place Aug. 16. The application process will continue through July 31 and costs $10.70 to enter. The season is set for Nov. 2-7 and Nov. 9-14 in designated areas. Visit the Pennslyvania Game Commission’s site for more info, or apply for a license here.

TENNESSEE
Tennessee doesn’t have all that many elk just yet, but that doesn’t keep the ones they have from being worth a rather large fortune. The state charges $10 to enter the annual drawing for a permit, plus $2 if it’s done by internet. However, only four elk-hunting permits are available. A fifth permit is provided to an organization such as the Rocky Mountain Elk Foundation as a fundraising perk. If you want a permit, apply by July 23; the season takes place Oct. 19-23 at North Cumberland WMA in Scott County. Visit the Tennessee Wildlife Resources Agency site for more info.

VIRGINIA
There are some elk roaming around outside Virginia’s closed elk zone, but the state doesn’t make a big deal about it. Anybody who has a valid hunting license and permits can shoot an elk of either sex if they have the opportunity during deer season. The exception is the zone in Buchanan, Dickenson, and Wise counties, which is where most of the elk stocked in the state’s southwestern coalfield as part of a restoration program currently reside. Still, a few wandering elk are taken outside the area each year. Virginia’s original plan called for a managed elk-hunting season to begin within five years of the last stocking. However, elk are still being stocked, so it might be a while yet. Visit the Department of Game and Fisheries for more info. 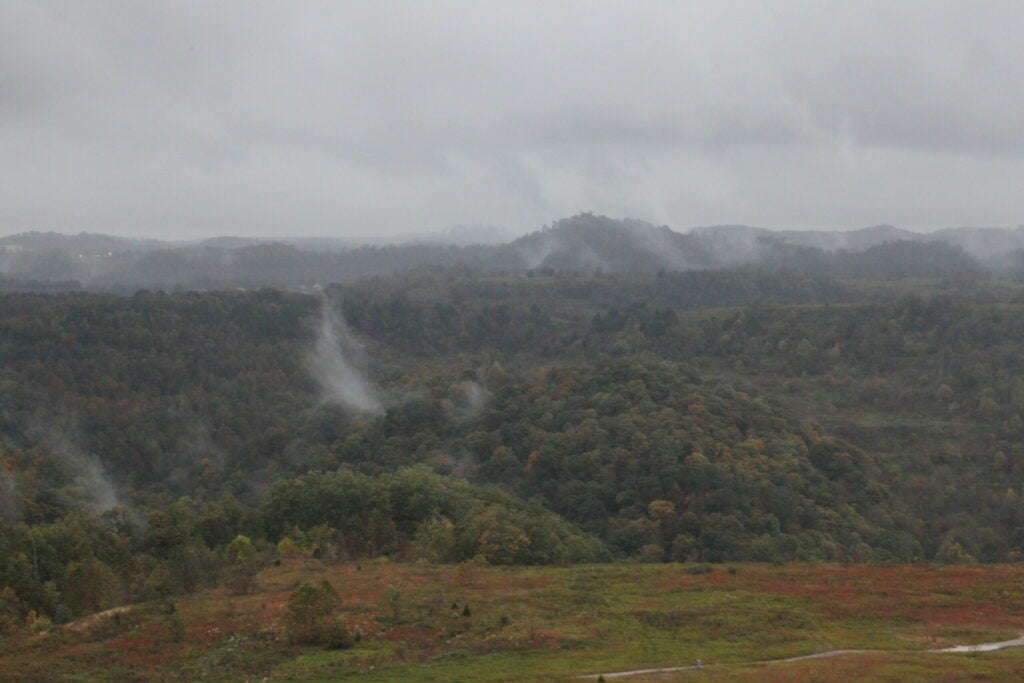 Kentucky Elk Country: Though not nearly as rugged as Western elk country, the wooded mountains of the Ozarks and Appalachians have what it takes to support thriving herds of elk.

KENTUCKY
You might want to scratch this state off your list for now, unless you drew one of the 910 permits available for 2015 or have a place to hunt outside the elk zone. Kentucky’s permit application period runs from Jan. 1 through April 30 each year, and is well worth the $10 per application to enter. By far, the Bluegrass State has been the most successful with elk restoration and now has a herd estimated at more than 11,000, which makes it the 10th largest herd in the country according to the Rocky Mountain Elk Foundation. Plenty of bulls scoring in the high 300s have been taken there, including the state gun record of 372 6/8 harvested in 2009 and the state archery record of 361 5/8 tagged last season. The elk zone now consists of 16 counties, a far cry from the days when the first animals were brought into the Commonwealth and kept at Land Between the Lakes in the western part of the state. Though they were never released at LBL, beginning in 2002 that small herd became the seed stock for elk released in the reclaimed strip mine land of the eastern mountains. Now a number of states (see below) are prevailing on Kentucky to provide elk. As is the case in Virginia, in Kentucky it’s legal to shoot an elk during deer season if it wanders outside the established elk zone–and it happens. A hunter must possess a valid hunting license and an out-of-zone elk permit: $30 for residents, $400 for nonresidents. Visit the Department of Fish and Wildlife Resources for more info. 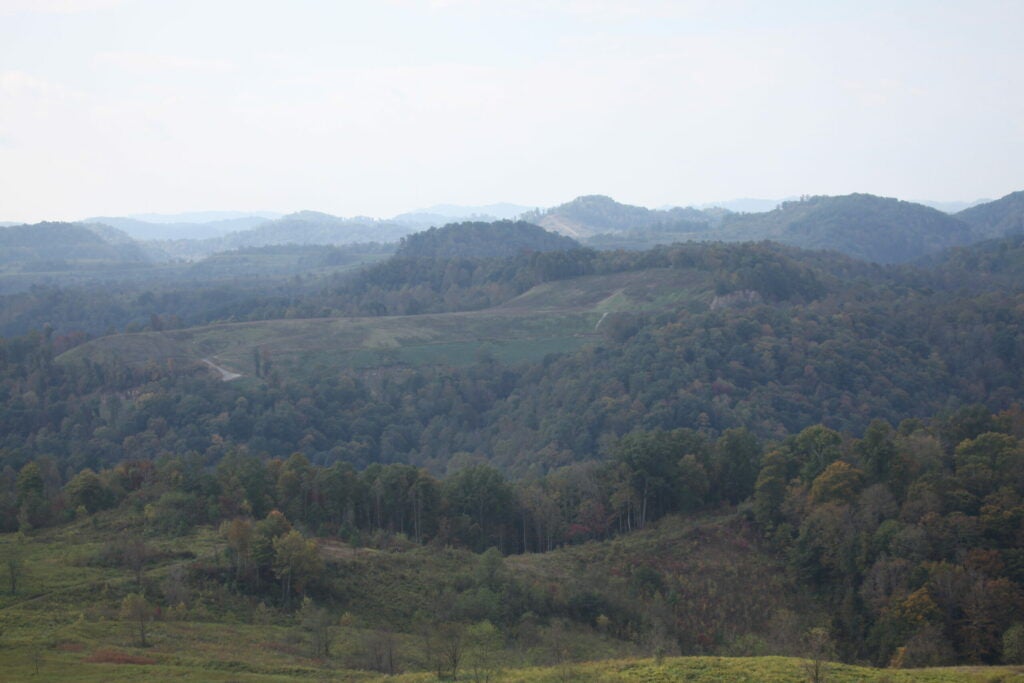 Eastern farmers and elk don’t mix, but areas such as Kentucky’s reclaimed strip mine land have proved to be ideal habitat for the big grazers.

MORE TO COME
And there are even more Eastern states slated to introduce an elk season:

WEST VIRGINIA
The Mountain State has been trying to jump-start an elk-reintroduction program for several decades. Last spring the Rocky Mountain Elk Foundation pledged a $50,000 grant to the state for that purpose. In a public meeting, expressions of support for reintroduction were overwhelming. As is the case in Virginia and Kentucky, elk will be released onto reclaimed mine land in the mountainous area of the south where run-ins with farmers and vehicles are apt to be minimal. In West Virginia, that’s McDowell (across the state line from Virginia’s Buchanan County), Wyoming, Logan, and Mingo counties plus southern Boone, Lincoln, and Wayne counties. Visit the Division of Natural Resources’ site for more info.

MISSOURI
In 2010, Missouri’s Department of Conservation began an elk restoration in the southern part of that state on the Peck Ranch Conservation Area in Shannon, Carter, and Reynolds counties. In May 2011, the first elk were transported from eastern Kentucky to Missouri to begin the project. It’s still going to be a few years before the Missouri herd has reached a size when hunting will be applied as a management tool.

WISCONSIN AND BEYOND
In June of this year, the first 28 of 150 elk that Wisconsin will acquire from Kentucky were transported north as the former’s restocking program got underway. It’s in the works, as it is in New York and a couple of other states.

And so it goes. Outside of Kentucky, elk hunting isn’t all that great in the eastern part of the country—yet—but people do draw permits and harvest elk there. Apply while you can and don’t sweat the details. If you hadn’t thought about hunting elk in the eastern U.S. this winter, maybe you should. You can work out the plans later.

Otherwise, you can wait around for that fabulous Rocky Mountain elk hunt that’s on your bucket list. If you’re like me, though, it’s a pretty deep bucket.