Make the Perfect Archery Shot on a Giant Bull Elk

The seconds before the shot are when archery elk hunters mess up most. Keep your head and follow these rules 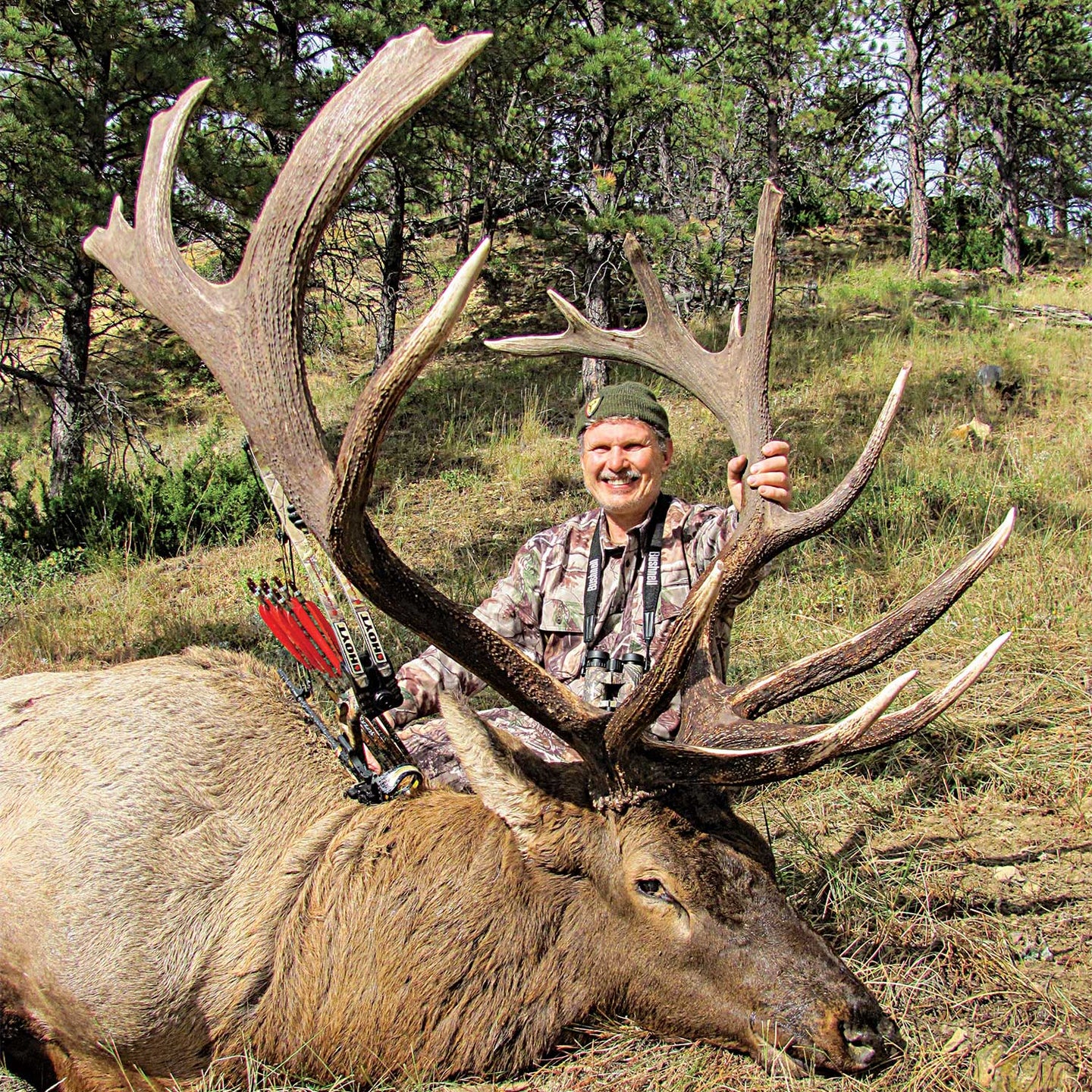 Elk are big, beautiful, and raucously noisy during the rut. I can’t think of a more exciting animal to bowhunt. But shooting an elk with a bow is seldom easy. Even after you get within range, things can go wrong. The challenge is amplified by the paralyzing excitement of a bull bugling in your face, and sometimes the fatigue of having navigated steep slopes for hours on end.

I’m fortunate to have bagged 39 elk with a bow, including 28 bulls that made the Pope and Young record book. Based on that experience, here are some tips I’ve learned about being successful at the moment of truth.

Even at close range, a moving bull can spell disaster. In timber or areas with brush, it is painfully easy to skewer a limb as you swing on the animal and release. Elk also have amazing reflexes. A moving bull that hears your bow or sees you release can lunge or crouch faster than a flat-footed animal. This reflex can easily cause you to miss the vitals.

Deer hunters often underestimate the distance to an elk. The average bull is three times larger than the average buck deer, and in the open, it’s easy to estimate the distance to him as less than it actually measures. But the opposite can also occur when you encounter an elk in heavy cover, where they’re frequently closer than they look. For these reasons, every bowhunter should carry a rangefinder to eliminate guesswork.

According to Pope and Young Club statistics, about 50 percent of record-size elk are shot beyond 30 yards, and 25 percent beyond 40 yards. The average Eastern deer is arrowed at less than 20 yards. But consider this: A bull elk’s vital chest zone is almost twice as large as a deer’s. If you are deadly on deer at 20 yards, you should be equally deadly on elk at 40 yards. It’s a simple matter of math.

It is always unwise to shoot at any animal beyond your personal effective range. But keep in mind the much larger kill zone on an elk as you determine your ethical distance.

Don’t dally when you finally do get an opportunity. Even at water holes and mud wallows, elk tend to drink or roll, and then quickly leave the area. Don’t rush things, but take the first good, clear broadside or quartering-away shot that presents itself, because you are not likely to get another.

Elk are big, tough beasts. An arrow through the chest is quickly lethal, but only with a solid heart or double-­lung hit. Never shoot at an elk unless it’s broadside or quartering away. They are notorious for going long distances with hits through only one lung, the paunch, or the rear end.

A mature bull measures about 28 inches from back line to bottom of brisket. About a third of the area behind the shoulder is non-vital tissue. The top 8 ½ inches of the chest is spine, muscle, fat, hide, and hair. The bottom 3 ½ inches is brisket bone and cartilage, muscle, hide, and hair. Only the 16 inches in between is vital chest cavity. An arrow that hits the very top of this cavity seldom drops an elk fast. This leaves about 14 vertical inches of quick-kill zone.

About a third of a broadside elk’s heart and lung zone is shielded by shoulder blade and foreleg, too. That heavy bone is nearly impossible to penetrate with an arrow (the same is true of an elk’s spine). But the ribs aren’t. Because of that, a quartering-away shot angle is the best. On a broadside bull, aim 7 inches above the elbow and 6 inches behind it, and you should hit the lungs dead center for a fast kill.