Catch a big, wary brown trout at night after the crowds are long gone 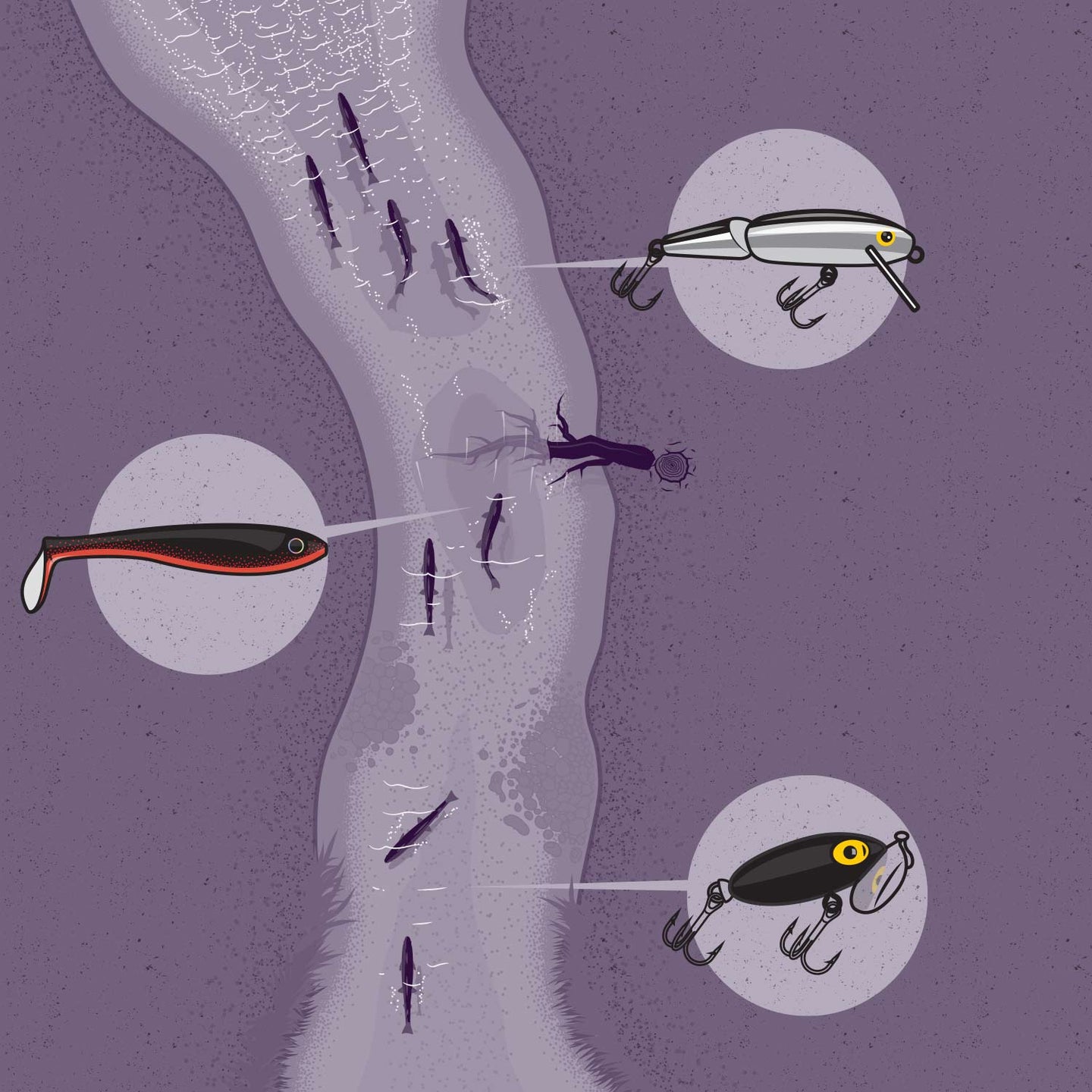 The kids might be off from school, but you’re still working like a dog during the dog days. Sure, you might hit a good trout or two on the weekends, but there’s a strong possibility you’re not alone on the river. Wild trout are incredibly susceptible to angling pressure, which is why some of the best-known trout fisheries in the country can get really slow by midsummer. The fish have seen it all, and they’ve gotten smarter and more selective during daylight hours. While the lucky guy who can be on the river while you slave away struggles, you’ve actually got the upper hand. Between that daytime pressure and the warmer water temperatures, many big browns hunker down until the sun goes away. And when that happens, fishermen go away. That’s when you show up and score the toad that’s finally ready to chow down. Here’s how.

Tail-outs that are 2 to 4 feet deep and have a moderate flow are prime haunts for nighttime browns. If bug activity was high that evening, assume the fish that pushed into this water to sip mayflies and caddis are still there at sundown, and most likely they’re still looking up. They’ve already had some appetizers, so now give them a steak dinner. Any thin-profile, shallow-diving plug can work here, but those with a strong swimming action during a steady retrieve, such as a Rebel Jointed Minnow, are particularly effective. Cast downstream at an angle across the current. With the rod tip held high, just start reeling very slowly. The goal is to let the current do all the work as the lure sweeps in an arc across the run. Don’t get aggressive with the retrieve; you want the plug to dig very slightly and wobble just barely under the surface as it swings. When your line straightens out, don’t zip the lure in; many times, a trout that follows from the middle of the zone will attack right before the lure comes out of the water.

Rest assured that those deep, dark holes on your home river that you think hold monster trout do, in fact, hold monster trout. Problem is, everyone else knows about them too, which can make the fish that live in them finicky due to the constant bombardment. Even the most pressured community pool, however, can give up the goods at night. If those holes feature cover, such as downed trees or deep boulders, all the better, because it means the fish have a permanent home within them, and they’re more likely to leave it in the dark. A variety of lures can work here, but a soft-plastic swimbait that puts off a strong vibration is a great choice. Rigged on a jighead, it allows you to work in any part of the water column, which is key because while the fish may be more apt to feed late, they might not always be willing to come up shallow within very deep pools. Cast slightly up-current and let your swimbait sink to the desired depth. Reel just quickly enough to get the tail thumping as the bait swings. I’m a firm believer that dark lures get bit more often at night, so I’m a big fan of the Basstrix Paddle Tail Swimbait in Midnight Orange for this technique.

Read Next: How to Catch Monster Brown Trout in Small Streams

You know those super-slow, medium-depth stretches of river that you usually consider junk water during the day? They can be pure money at night. Lit by the sun, they may not hold much appeal for fish, but when the sun sets, a percentage of the local browns will get on the move to hunt, leaving the undercut banks and submerged cover where they were hiding all day. Unlike fish that face upstream in areas of strong current, browns in these slow stretches tend to cruise around, often circling an area, looking for anything from crayfish on the bottom to frogs and mice swimming overhead. Since they’re actively foraging, they’ll come from a distance for a meal, and the gurgle of a black Jitterbug is hard for them to resist. Fan-cast in all directions, changing the presentation from crosscurrent to downstream to straight upriver. Reel only fast enough to get the Jitterbug bubbling and hang on tight, because when a trout takes a shot at one of these classic largemouth lures, it’s usually not a little one.