Sick of prepackaged backcountry meals? Catch some trout and fry them up with this simple recipe 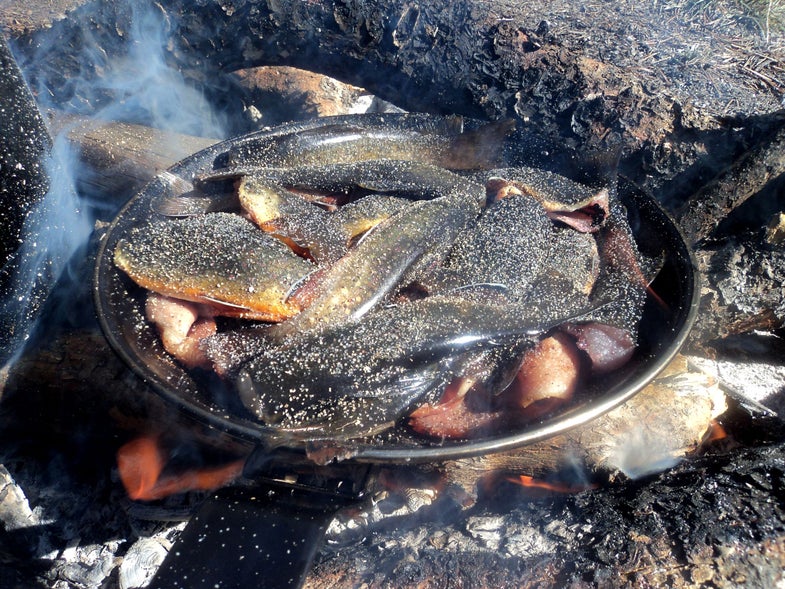 During last season’s elk hunt deep in Utah’s high elevation wilderness, my hunting buddies and I developed an appetite to fill our growling bellies with something other than Mountain House or instant oatmeal.

So we hunted around in a nearby thicket of lodgepole pine for saplings tall and skinny enough to pass for fishing poles. A few minutes of whittling and we were ready for some line and a hook. Scrounging through my war-bag I found one treble, three small worm hooks, and a roll of line.

A few little white grubs and an hour later we had yanked two handfuls of brook trout out of the serpentine stream that bisected the meadow near camp. The biggest fish was a whopper, nearly eight inches long.

Many high elevation areas of the Rockies hold streams full of tiny trout. Pile them in a pan and fry them up with a bit of bacon to make a meal fit for a high-country king. Here’s how to cook yourself a plate of tasty trout fingerlings.

Clean the fish, removing entrails and head. Line your frying pan with bacon and set over a medium-hot bed of coals. As soon as the bacon starts to sizzle add the fish, crowding them in till the bacon is covered or the pan is full. Sprinkle liberally with salt and black pepper, then stand by.

Fresh trout will curl and wriggle in the pan as they begin to cook, so make sure they don’t swim their way out of the frying pan and into the fire. Use a spatula, fork, or clean stick to stir and turn the whole mess frequently, making sure that nothing scorches. The fish will start to crumble as they fry, and that’s okay.

Tend your culinary masterpiece diligently until the bacon is crispy and the fish are flaking apart. Remove from heat and pull the backbones, fins and tails away from the fingerlings. Don’t worry about the rest of the bones—they cook until they’re so soft that you won’t even notice them in your mouth. Pour off any excess bacon grease.

Divide among the hungry wolves that have been circling your fire (who used to be your hunting buddies), saving the largest portion for yourself.

Note: Study local game and fish regulations before heading afield. Don’t forget to take some bacon along. And please don’t throw the fish offal to the edge of camp for a bear to clean up.