Traditions and Trout: A Simple Recipe for Salt-Crusted Trout

Traditions play a big part in our hunting and fishing culture. Many of those have to do with the opening... 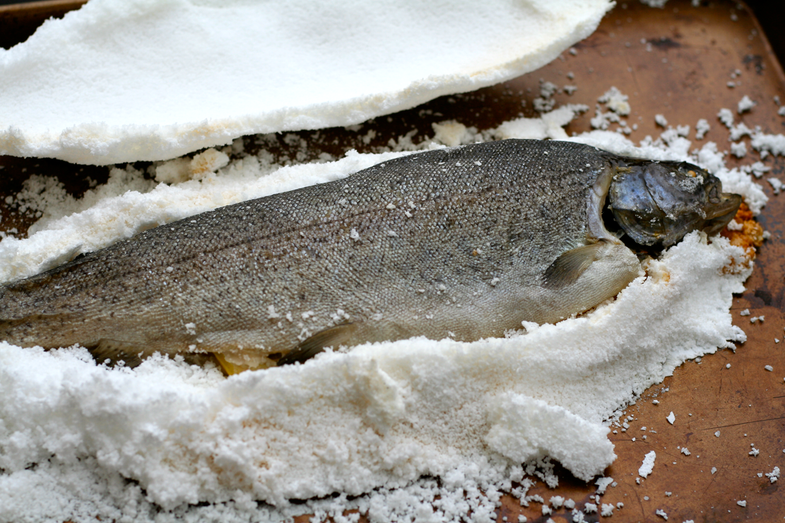 Traditions play a big part in our hunting and fishing culture. Many of those have to do with the opening of a season, and here in Minnesota, the fishing opener is a big deal. When I was little we would all head up to Leech Lake in northern Minnesota to my grandparents cabin. Both sets of grandparents, my mom’s parents and my dad’s parents, lived next door to each other up there, and my whole family would come for the opening of the walleye season.

Friday night at midnight we would all be standing out on the dock ready to cast our lines in. Everyone would stay up all night and fish, and after a few hours of fishing my grandfathers would head up to the boathouse and start filleting. We would always try to make it all night long, but usually would only make it until 3 or 4 am before falling over from exhaustion. Whatever time we’d wake up is when we’d start fishing all over again. Saturday afternoon the entire shoreline of family and neighbors would get together for a fish fry—and then go back out fishing.

That happened every year and was as anticipated as Christmas morning. It was a tradition that ultimately shaped the way I view fishing. Fishing is supposed to be shared ,and while catching a 28 inch walleye is great, catching one with family and friends around is just that much more special. 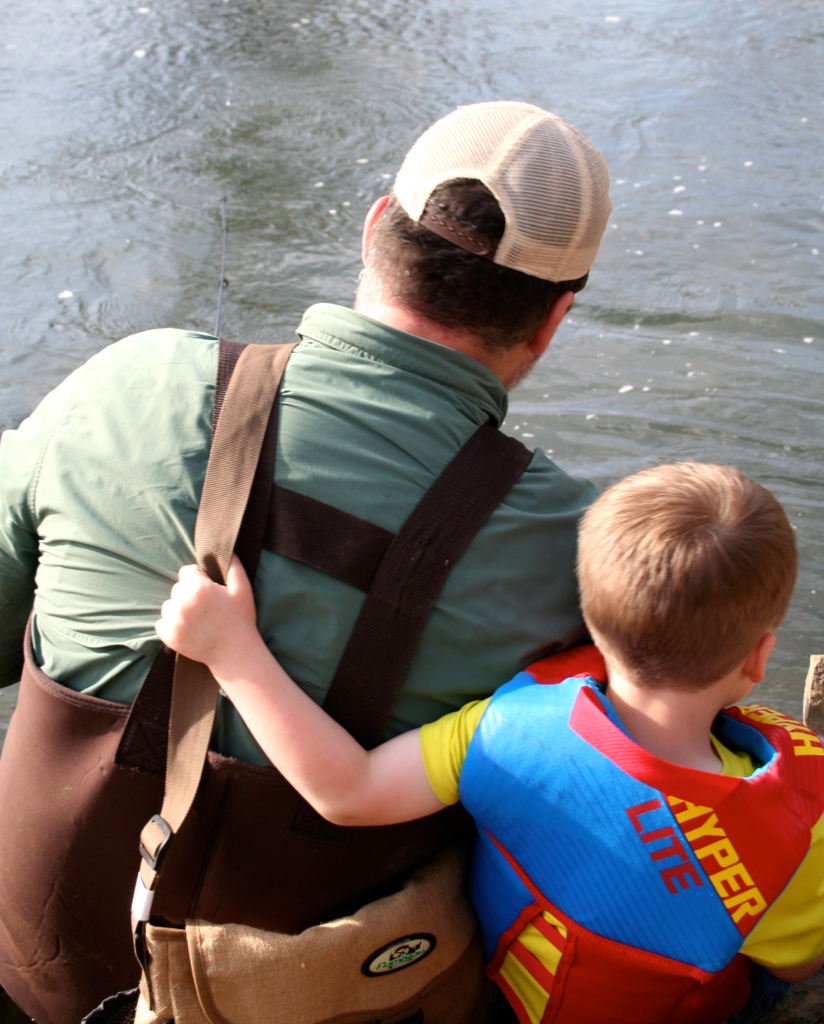 The Minnesota duck opener is the same thing. If at all possible I will be in Wabasha, MN with my good friend Eric Passe. We know going into it that we are probably only to get a couple of wood ducks and the swamp is probably going to be crowded, but there’s something about eating hotdogs in the duck blind and listening to that opening flurry of shots that sees me returning every year.

Those old traditions hold a special place in my heart, but there is always room for new ones. I usually try to get out on the opening weekend of the stream trout season, and this year was no exception. The difference though was that my sister and her husband had bought a new place in southeast Minnesota with a river that runs right through their property. The old owners had told them there are good trout in that river and that a couple of smaller streams flow into the river close by. Those are the hot spots. So we all decided to get together for a weekend of trout fishing and enjoying what I hope becomes a new tradition.

We all gathered Saturday morning and headed into the river to see what was biting. There were many areas that looked promising and, based on the reports from the previous owners I was hopeful. Sadly there wasn’t a trout to be caught. We caught several small suckers, some shiners, a few small carp and a smallmouth bass, but not a single trout. Not catching what you’re after isn’t much fun but with friends and family around, some good food and lots of laughter I don’t ever seem to mind not catching fish.

Those same traditions also extend to the kitchen. I wasn’t lucky enough to catch any trout this last weekend but I was lucky enough to find this rainbow trout at my local fish market, so it will do for demonstration purposes. One of my favorite ways to prepare trout is to bake it in a salt crust. It’s an amazingly simple and delicious method. 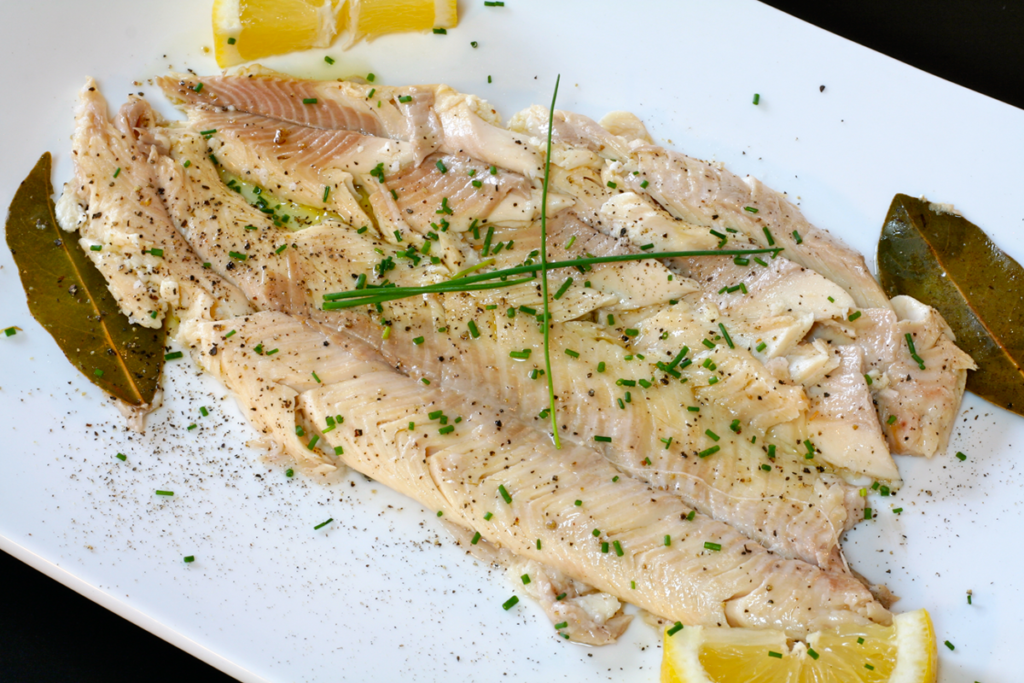 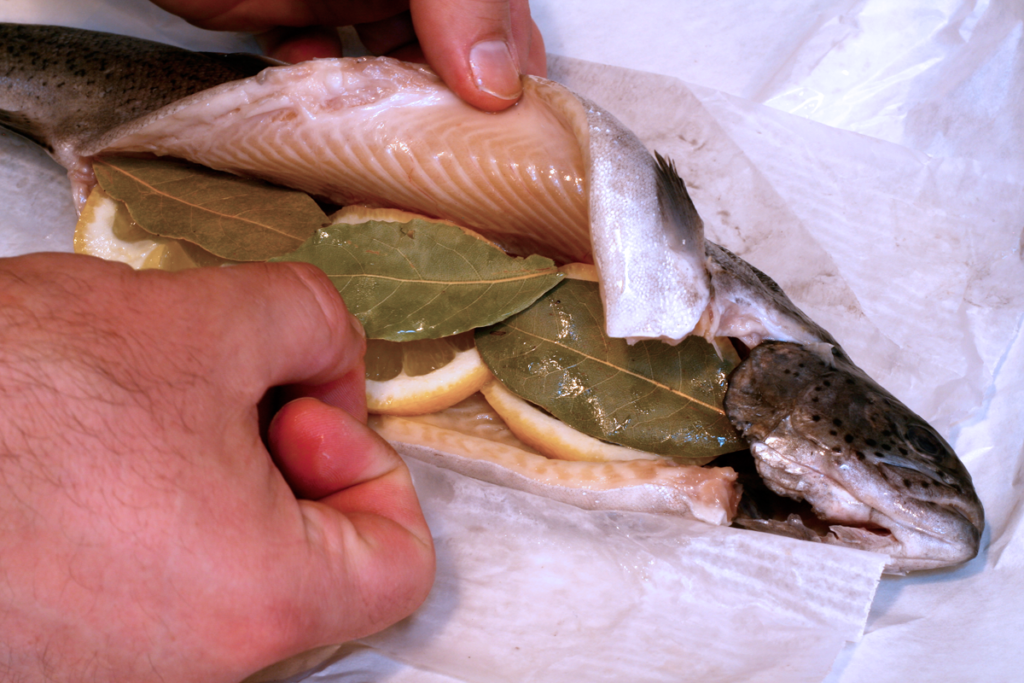 Start by mixing the salt and the water together just to give the salt the consistency of wet sand. Make a bed of salt about ¼ inch thick on a baking sheet. Stuff the lemon, garlic and bay inside the cavity of the trout and then lay it on the bed of salt. Take the remaining slat and pack it over the trout. It’s okay if the head and tail aren’t covered. Pace in a 450 degree oven for 40 minutes. 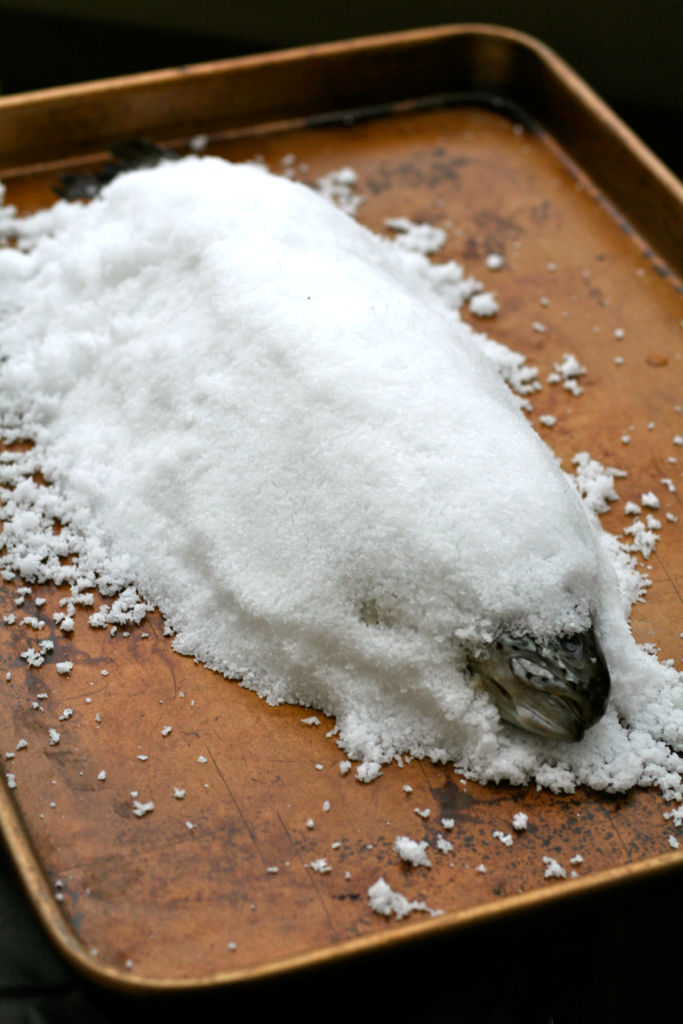 When the trout is done the salt will be hard and can easily be broken off the fish. The trout will have steamed inside the salt crust and should easily flake off the bone. Serve with a drizzle of olive oil and some black pepper.