How to Catch Dropback Steelhead in the Spring 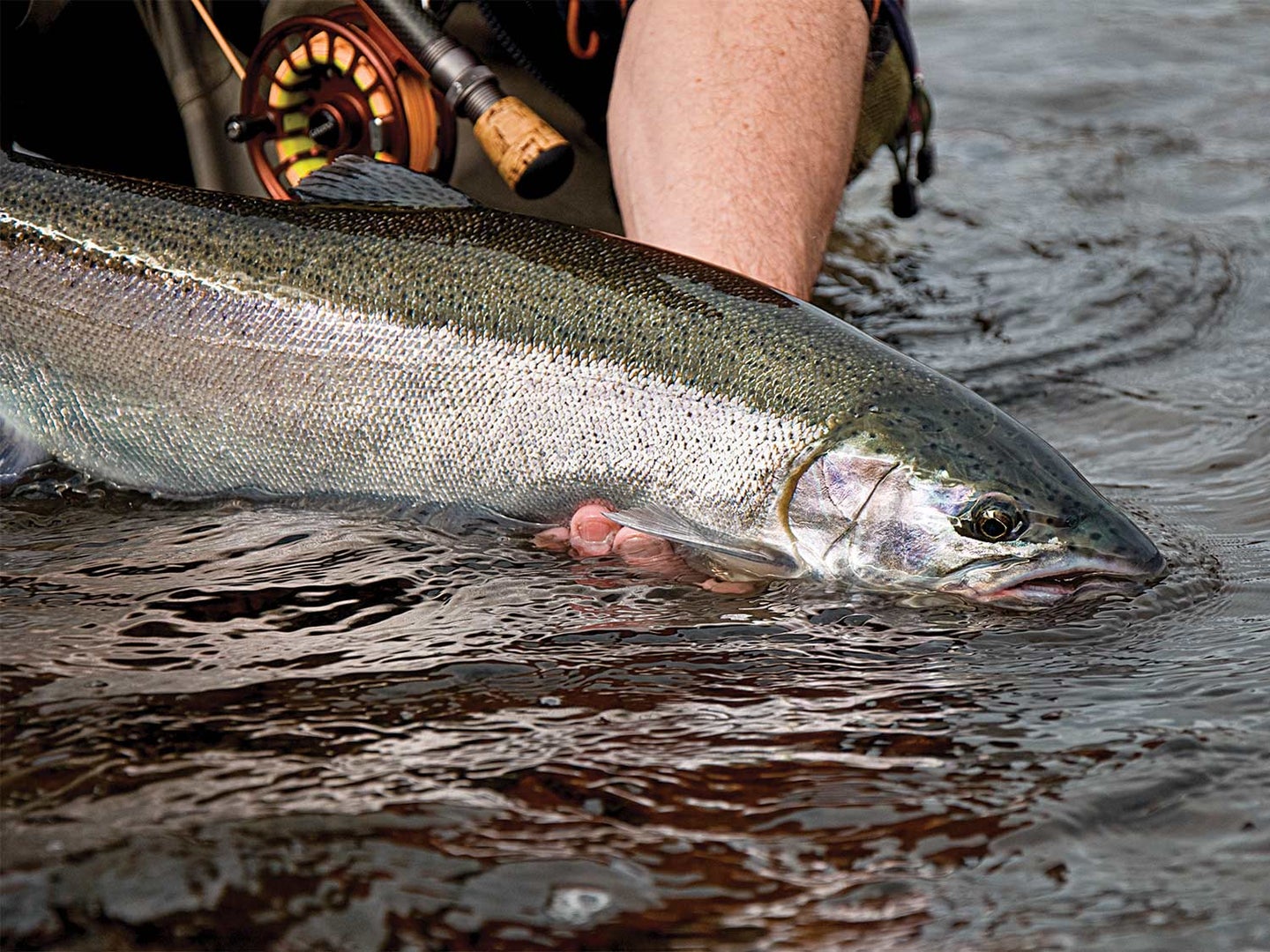 Success with dropback steelhead is all about monitoring river conditions. Joe Cermele
SHARE

Based on my first few attempts, I assumed that suffering was essential to catching steelhead on Great Lakes tributaries. Those early trips, made between December and March, left me with numb extremities, ice-clogged guides, and few, if any, fish. That’s why, during the first week of May a few years back, I almost felt guilty wearing short sleeves while fighting my umpteenth steelhead. A few months prior, during a frustrating midwinter trip to the Salmon River in New York, the clerk at Whitaker’s Sport Store took pity on me and said, “If you really want to catch them good, come back in the spring for the dropbacks.” He was referring to the post-spawn steelhead in the process of returning—or dropping back—to Lake Ontario. After a winter of limited feeding opportunities, these steelhead chow voraciously to regain lost weight, making them much easier to catch. What’s not as easy is figuring out when to show up.

The peak action may last a couple of weeks at best, and some years, it doesn’t happen at all. An extended period of high, muddy water in spring could send post-spawn steelhead flushing back to the lake in one rapid shot before anglers ever get a chance to target them.

On Great Lakes tributaries, steelhead spawning usually begins in February and can continue into May. Runoff, water levels, and water temperatures all determine when spawning occurs, and that varies from river to river and year to year. The fish linger in the river up to a few weeks after the spawn before warming water sends them to the cool lake depths. This means the best dropback fishing can happen from early April to mid-May.

Joe Diorio, a Connecticut-based charter captain and obsessed steelheader far more experienced with dropbacks than me, watches the water levels above all else. When they return to normal after a spring runoff, he clears his schedule. “I prefer lower water in the spring,” he says. “It concentrates the fish in the deeper holes.”

In the fall and winter, low water often negatively impacts the fishing, but after the spawn, steelhead are so hungry that even low and clear conditions can’t put them off the bite. It also helps that April showers, spawning suckers, and emerging salmon smolts provide a potluck of worms, eggs, and tiny fish to feast on.

While water levels let Diorio know when to go, water temperature determines where he’ll find the steelhead. Before the spawn, with water temperatures in the 30s, steelhead spend most of their time on the bottom of deep, slow pools. After the spawn, when the temperatures climb toward 50 degrees, they’ll hold higher in the water column and often gravitate to faster water. The heads and tailouts of pools are good places to find feeding dropbacks, but Diorio says not to rule out the deeper holes. There, he says, steelhead will ride out the daylight hours, resuming their downstream swims after dark.

Read Next: Fishing for Brown Trout and Steelhead on the High and Mighty Niagara River

From the moment they enter the rivers, steelhead have an irrepressible instinct to consume small, brightly colored spheres. So, regardless of the season, Diorio, who predominantly uses a centerpin outfit, fishes egg sacs and beads. In the spring, however, he adds nightcrawlers to his arsenal. It may be strange to think of a steelhead snapping up a nightcrawler like a catfish, but snobbery is a trait of the fishermen, not the fish. Jigs drifted under floats are another spring go-to for Diorio, who prefers light colors such as white and peach. Tipping the jigs with waxworms can help tempt steel, but fallfish and sunfish often beat the steelhead to the bait.

Nymphing or swinging with a fly rod is also very effective for dropbacks. Egg imitations fished under an indicator or ticked along the bottom are as effective now as they are in winter, but in the spring, sucker spawn and San Juan Worms often get hit faster. Ornately tied salmon flies will move spring steelhead, but so will Woolly Buggers and Muddler Minnows. Streamers that imitate salmon smolts are a good match-the-hatch option on rivers with natural salmon reproduction, but overall, the actual fly choice is less important than covering water to find an active pod of fish.

Spin fishermen throwing stickbaits and spinners have a leg up because they can cover lots of water quickly, and both lures will trigger fierce strikes from dropback steelhead. There’s also a strong possibility that these offerings will draw out some bonus smallmouths. In fact, if you’re taking a shot at dropbacks, it’s wise to pack some tubes or Senkos. If you show up late and find the river void of steel, most Great Lakes tributaries provide excellent bass action in spring.