Long in the Teeth: Target Big Pike in the Fall

Spring pike will attack just about anything, but if it’s a true giant northern that you want, there’s no better time than fall 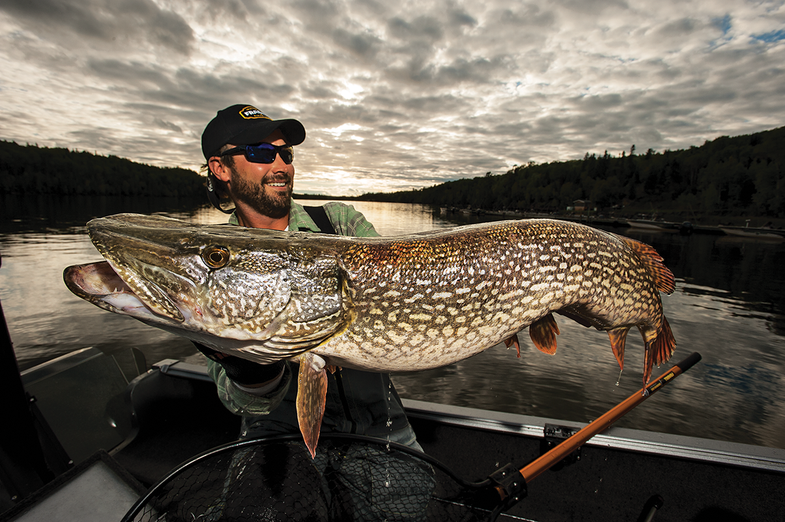 Every time I toss a lure for trophy pike these days, I feel as if I need to make an appointment with a psychologist. Flashbacks…those damn flashbacks simply haunt me.

It was just a few falls ago. I was casting a large crank, and for some reason I didn’t see the humongous pike until it charged. I remember the fish accelerating and my bait disappearing—my line parting before I had time to react, cut by a tooth in a mouth with many.

I trembled for a full minute before reaching into my tackle box for another bait. I’m not the first pike angler to experience something akin to buck fever. I had no idea pike grew that big. I can’t shake the memory, but that’s not a bad thing. It reconfirmed lessons about catching huge fall pike that I’d forgotten.

Lesson 1: Understand Giants
Serious pike anglers learn quickly that trophy pike—35-plus inches—are tough to come by. In the upper Midwest, where I fish most often, large northerns are less common than 6-pound smallmouths or 10-pound walleyes. The sad fact is that pike are aggressive, and even where angling pressure is light, harvestable fish typically end up in someone’s frying pan or pickling jar long before they ever reach trophy proportions.

But big pike and little pike might as well be two entirely different species. Big pike crave cooler water, for example. By summer, they’ve abandoned the shallow weed flats you’ve been fishing since spring and followed the thermocline into open water. Now that October is upon us, however, big fish are moving shallow again. Cooling waters are the main reason, but big pike are also following favored forage—fall-­spawning ciscoes and whitefish.

Lesson 2: Learn Your Lake
Knowing how water temperature influences pike movement will put you on the big fish. As waters gradually cool into the 40-degree range, shallow weeds begin to die. Bait and other fish respond by moving deeper, typically holding on rock points that extend into deep water, steep breaks, and mid-lake humps. Green vegetation is a pike magnet, but rock is often better. Key depths are 10 to 17 feet.

I fish most of these baits on the same tackle I use for bass—medium/heavy baitcasting rod (Abu Garcia Veritas Winch), low-profile reels (easy to cast all day), and monofilament line (Berkley Trilene XT) in 14-pound-test. I will go to braided lines when I fish soft-plastics to improve hookup ratios, and I switch to muskie gear for bigger jerkbaits or gliders that weigh an ounce or more. Big pike respond best to my slow to medium retrieve speeds. A reel geared at 5.4:1 gets the nod.

Lesson 4: The Live-Bait Option
In states that allow anglers to fish multiple lines, adding a live bait to your presentation can be deadly. Muskie anglers are used to soaking suckers near the boat to take fish that follow their artificials. The same technique will work for big pike at this time of year, but don’t go nuts on bait size. I prefer baits running 18 to 22 inches for muskies. When chasing pike, however, I downsize to 6 to 10 inches, and often go with redtail chubs over suckers (cheaper and hardier).

I harness the bait with a quick-strike rig built with two trebles and 40-pound fluoro, and hang it below a float to keep track of the bait. At the strike, I let the fish turn before setting the hook—but don’t give it time to swallow the bait. This way the fish is generally hooked in the corner of the mouth and releasable, which is good, as protecting these fish is the key to this resource.