Despite a gauntlet of hungry seals, commercial fishermen, tribal gill nets, and sport fishermen all vying for an abundant albeit... 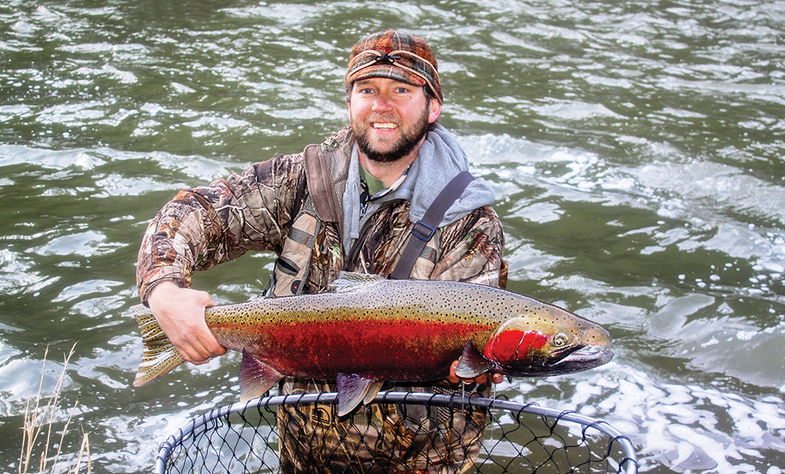 Despite a gauntlet of hungry seals, commercial fishermen, tribal gill nets, and sport fishermen all vying for an abundant albeit limited resource, more than 300,000 steelhead reach Western inland headwaters 900 miles from the ocean. Anglers who follow the annual migration routes in Idaho’s Clearwater River basin catch steelhead that can exceed 20 pounds. But, with so much interest by groups who all want a piece of the migration, big returns don’t happen without some hard work.

The Clearwater is one of many rivers flowing westward and feeding the Columbia River basin. Looking at it from an anadromous fish’s perspective, it’s also a pathway from the Pacific Ocean to tiny mountain tributaries. With a total length of 75 miles, the river flows from the Bitterroot Mountains along the Idaho-Montana state line and meets the Snake River at the Idaho-Washington border. It’s here at the city of Lewiston, Idaho, where smaller “A-run” steelhead that just spent a single year in the ocean turn south into the Snake River for destinations as far inland as the Sawtooth Valley in central Idaho’s Mountains. It is also here that “B-runs” turn east after a two- to three-year journey in the Pacific Ocean, where they transform into colossal powerhouses eager to spawn in the places where they were hatched.

For steelhead anglers, knowing when and where to go is important, but hooking one is where most fall short. Here’s a look at all the things anglers need to understand for a chance to yell, “Fish on!” when fishing the Clearwater River.

Finding Fish in Changing Conditions
Access to the Clearwater is easily found all along its banks by driving down state highways 12 and 13, east of Lewiston. Drift-boat, raft, and wade-fishing anglers can find pull-out spots and designated fishing access to all the riffles, runs, and pools any river angler could hope for.

Even with all that prime river access and high fish counts, many anglers struggle to catch even one fish per day, and under­equipped anglers are often left bewildered by the sheer power of these massive brutes. In contrast, some anglers enjoy daily double-digit catches and hold onto more than half the fish hooked. But using the right techniques at the right times is critical for success, and they change as dramatically as water conditions do throughout the year.

Cold winter days involve fishing slow-moving deep runs where steelhead hold tight until the water warms up. Scott Willumsen has been guiding steelheaders for more than a decade through his guide service, On the Clearwater, which specializes in catching steelhead using a variety of drift-boat fishing techniques all season long.

“Back-trolling plugs and shrimp is best when the water is cold,” says Willumsen. But the experience for his clients isn’t as rewarding as it is during other times of the year. “I prefer to side-drift eggs because it’s more interactive for my clients—unlike trolling plugs.” And that’s what he does before and after the winter lull.

Water temperature has a major effect on where the steelhead will be, but no successful angler will ignore river discharge rates, measured in cubic feet per second (cfs). The U.S. Geological Survey (USGS) maintains discharge rate data at waterdata.usgs.gov. The Clearwater River fishes best when flowing at or below 2,000 cfs, and as flows are dropping. But good steelhead fishing requires increased stream flows to get fish moving, followed by a few days of receding and clearing water. If you can plan a trip on short notice, that’s the safest way to go, because the river can be as finicky as the steelhead are.

Walking into any tackle shop in the Clearwater River basin, you will find egg sacks, shrimp, and yarn all dyed bright colors like orange, red, pink, and chartreuse—all proven colors. Additives like fish oil, garlic, and anise oil are just a few of the effective scents that enhance artificial and natural baits to elicit a strike.

There’s a huge variety of effective techniques, all with one commonality: getting the bait down to the fish. Knowing when to use which baits and how to present them will make the difference between long days of doldrums and days of bent rods and high fives. 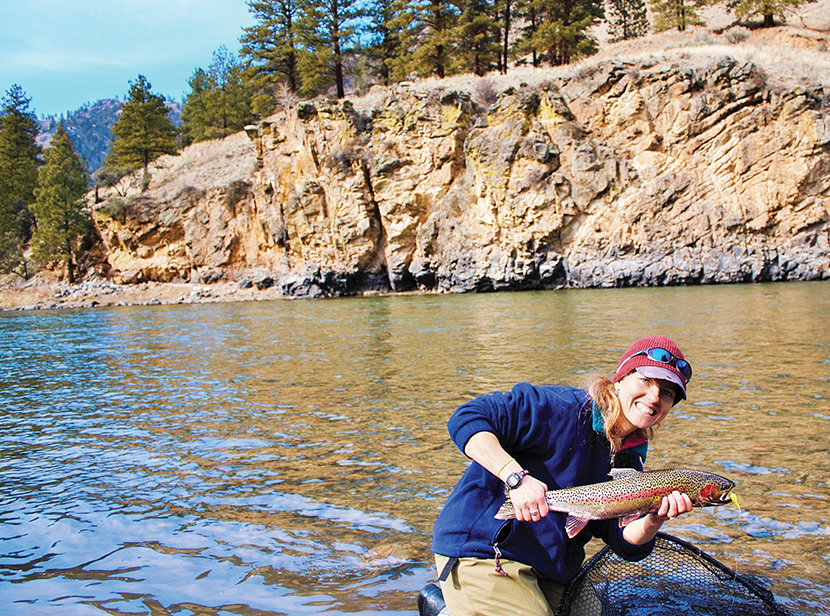 Side-Drifting
Techniques like side-­drifting eggs or shrimp work best during months like February, March, and September through November, when water temperatures are warm enough to keep the fish active. The best setup uses 10 ½-foot medium- to heavy-action rods with a spinning or baitcasting reel that can handle a butt whipping because it’s likely to receive one. Spool the reel with brightly colored braided line for added sensitivity and less line stretch on the hookset. Slinky or lindy rigs that tick along the bottom as you’re drifting with 12 to 24 inches of 20-pound leader material work best.

Drifting baits through a slow run can be done effectively and easily from shore, but to side-drift correctly from a boat takes some teamwork between the oarsman and the angler. The oarsman must keep the boat moving at a consistent speed that is equal to or slightly slower than the speed of the current. Cast at a 45-degree angle upstream of the boat to let the weight sink without pulling downstream first. Occasionally mend the line to keep the slack out, and when a steelhead strikes, set the hook hard—they’re called steelhead for a reason.

Bobber Dogging
One of the easiest methods is to use 3- to 6-inch foam or balsa wood slip bobbers (floats) with a dull finish. Set it up so that the bait will ride along the bottom of the river, where the steelhead are. Egg sacks, jigs, shrimp, and yarn flies are favorites. As the float slowly drifts, mend the line periodically by lifting the long rod upwards, lifting the line from the water without moving the float, and laying it down upstream. This is where the usefulness of the long rod is most noticeable. If the float stops or goes under, wait one second and set the hook hard.

Back-Trolling
When water temperatures drop, steelhead seek out deep, slow-moving pools and become more difficult to catch. When this happens, Willumsen says, the best way to get at the fish is to cast plugs and spoons or by trolling shrimp. “Trolling is best in cold water—drifting can be good anytime, though.”

To back-troll effectively, the boat needs to be holding or moving just enough to keep action in the lure at the right depth. By keeping lures right in front of the faces of holding fish, the fish will bite even when they are in lethargic winter mode. 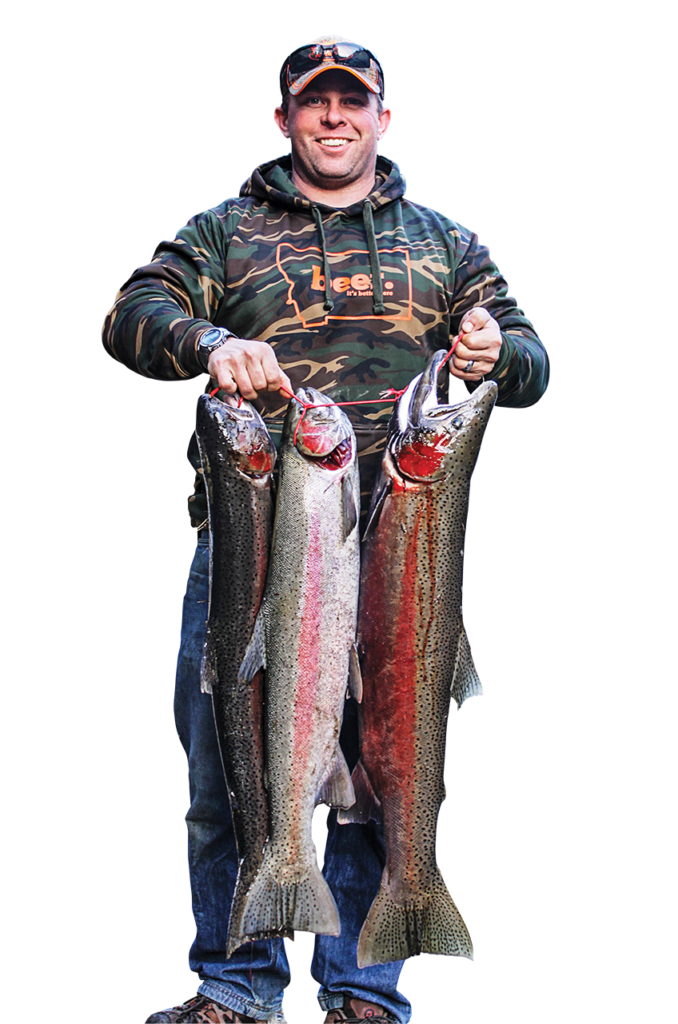 Flyfishing
Most anglers target steelhead with conventional tackle on the Clearwater River, but flyfishing is perhaps the most rewarding method. Single-hand fly rods in the 7- to 8-weight range should be used. And while many anglers drift steelhead flies under indicators and floating lines, the most effective way to flyfish steelhead is to use a sink-tip line like Jim Teeny’s T-series lines, with a short 15-pound-test leader. By using a sink-tip line, the fly will get down to the fish quickly and there’s no need for adding line-damaging split shot to the leader. In the late winter, sight-fishing can be excellent as water levels drop and steelhead begin staging. However, by late March, many of the fish begin to deteriorate.

The Future of the Fishery
Unlike salmon, which enter the river in massive groups and move upriver at a hurried pace, Clearwater steelhead are stream-maturing fish. This means that they enter the river system around August or September and find good holding waters, where they become sexually mature over the winter. Because of this, it’s possible to find steelhead in the Clearwater River anywhere from August to May, depending on water levels, temperature, and the whims of the fish. With 10-year average returns exceeding 300,000 steelhead, the odds are good that you’ll find them.

It’s uncommon to have to adjust harvest limits or implement closure limits. “Steelhead create predictable, relaxed fishing with minimal adjustments to angling regulations,” says Sam Sharr, anadromous fisheries coordinator for Idaho Fish and Game. The reason for this self-regulated fishing is because “if the fish aren’t there, the fishermen aren’t there.”

The success of massive returns on the Clearwater River is the result of a cohesive effort between multiple states, tribal councils, and individual anglers. In certain areas along the Clearwater River, late-winter anglers will find conspicuous perforated tubes lined up along the riverbank where they can voluntarily drop sexually mature fish. Fisheries technicians patrol the river in trucks equipped with big tanks for collecting the fish, which provide locally adapted brood stock to hatcheries.

Sharr says the preferred method is to use a fish trap to collect fish. But in some areas where there’s a need to collect locally adapted fish, there’s no suitable place to set up a fish trap, and that’s where the anglers really help out. Of the approximately 4,200 fish collected annually for the brood stock program, about 20 percent come from angler participation. The result of all of this brood stock collection is the annual release of 3.5 million steelhead smolts into the Clearwater basin.

With so many consumers along this incredible fishery, it’s a wonder there are still any fish. But Sharr views the competition for the resource as a positive factor.

“Ultimately these folks are allied together to maintain the salmon and steelhead fishery.”

Maybe having so many groups interested in the annual returns of Clearwater steelhead really is a good thing, because without the interest, the loud screams of anglers echoing off steep canyon walls announcing a bent rod would cease right along with the traditions of native tribes, who have been reliant on steelhead migrations for generations.

For now there are enough migrating behemoths returning for me to set the hook a dozen or more times a day, even after the coastal tribes take their fair share. There are even enough to keep a few for my dinner table each season. While the numbers of returning fish may change over time, I’m happy knowing that memories of screaming drags will live forever.