How to Catch Muskies by Fishing Deeper Water

Weedy bays may be your idyllic muskie waters, but now's the time to go deep 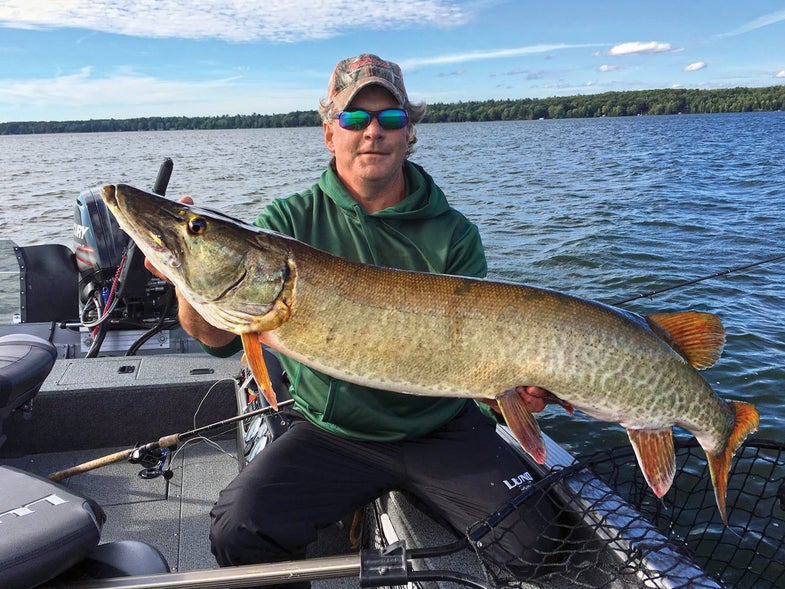 Guide Rob Manthei with a deep-water Wisconsin muskie prior to its release. Steve Heiting
SHARE

Northern Wisconsin guide Rob Manthei has bittersweet memories of a big muskie he boated during the 2016 season. It was one that he still wishes his buddy had caught. “I was fishing with my friend Bob Walczyk for the evening,” says Manthei. “Two days before, I had been guiding for walleyes when a really big muskie chased one of the walleyes to the boat. We rigged up to try and catch him, but failed. I placed a waypoint on my GPS and that’s the first place I headed with Bob.

“Weather was moving in and we could hear thunder in the distance. Bob had recently had rotator cuff surgery and asked to take a break. I begged him to keep casting the Bull Dawg, but he suggested I throw it while he cast something easier, so we switched. I lobbed the Dawg and counted it down about 8 seconds, and on my first rip the muskie hit.

“My buddy was happy he got to net the muskie and see it, but it would have been better had he caught it. Poor Bob.” Manthei’s muskie was boated from deep water far from structure. Years ago such a catch would have been viewed as an oddity, but today Manthei relies on fishing the abyss to put his clients onto quality fish, with June and July being the best months. He finds muskies in deep water regardless of whether the lake has a cisco or perch forage base.

“On cisco-based lakes, you can fish deep water early in the season, especially if we have an accelerated spring,” says Manthei. “The best places to start looking are adjacent to where the ciscoes spawned, whether it’s a creek mouth or a dark, flat bay. They just cruise out from the shallows and stay at the same depth. The baitfish will be high in the water column, so you really don’t need to fish more than 5 to 8 feet down, even over an 80-foot drop.”

Manthei looks for ciscoes with his electronics on the windy side of the lake, knowing muskies will be nearby. Ciscoes that are close to the surface are easily spooked by the boat, so he rigs transducers front and back, reading to two depthfinders mounted in the stern of the boat. “Often you’ll see baitfish on the bow-mounted transducer that you won’t see in the back,” he says.

Perch-based lakes require a little more time before their open-water bite gets underway.

“I decide to fish them based on what I see while I’m walleye fishing. When perch are up shallow, they’re constantly pecking at our walleye baits. But when they disappear, it’s usually because there’s going to be some kind of bug hatch over the mud in deep water­—30 to 35 feet,” says Manthei. “When the perch move deep, muskies will too.”

To narrow the search, Manthei fishes over deep sand-grass beds, which typically grow in 22 to 28 feet of water. “There are always perch in sand grass, but sometimes the muskies are suspended close to the surface and at other times they’re with the perch slightly above the grass,” he says.

Getting his clients to buy into fishing deep water can be difficult. “Nobody has a problem casting at visible weeds or wood without success, but open water is different,” says Manthei. “Clients need to build confidence in the pattern, and the best part is we often get bit right away. When the fish are in deep water, they’re there to eat, so we usually see action quickly.”