Here's where and how to catch a spring limit. 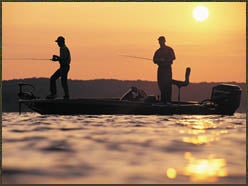 The walleye-fishing statistics gathered by fisheries biologists prove what experienced walleye anglers already know: The odds of catching walleyes are best in spring. On Minnesota’s showcase walleye lake, Mille Lacs, for example, creel records show that 50 percent of the annual walleye catch usually occurs within a month of the mid-May opener. That pattern is typical of most major walleye waters, although the dates of the heavy harvest vary depending on regulations and latitude.

Don’t get overconfident and think that early-season walleye fishing is always a slam dunk, however. The timing of the hot walleye bite depends on the progress of the spawn. Here’s the typical schedule: Fishing is great for a few weeks before spawning, but once spawning begins the action grinds to a halt for a while. Your challenge is to plan your trip to take advantage of either the pre-spawn or post-spawn bite. In some states, however, pre-spawn fishing might not be an option because the season is not yet open.

The issue of timing can be quite complex, especially if you live in an area with a variety of water types. Walleyes in a big river might spawn several weeks earlier than those in a nearby deep lake. And the spawn in a shallow lake might occur somewhere in between. Here are some tips on timing your early-season walleye trip and selecting the most productive fishing methods for your water.

The Key to Big Rivers

To get an early start on the walleye season, try fishing a big river such as the Mississippi or Missouri. River walleyes (and sauger, their smaller cousins) actually begin their upstream migration in the fall, gradually filtering into the tailwater areas where they will spawn come springtime. The action starts as soon as the weather warms up enough to keep the water open.

With water temperatures in the 30s or low 40s, walleyes are still in the early stages of the pre-spawn period. They might be found holding in light current and feeding sporadically. Prime locations include the edges of the main channel, deep holes and washouts around wing dams and other current breaks. Look for the fish at depths of 12 to 20 feet during this period, but they might be much deeper. I’ve found walleyes in water more than 30 feet deep, and sauger deeper yet.

My favorite technique in the early pre-spawn period is vertical jigging. Tip a Â¼- to 3/8-ounce short-shank jig with a 2- to 3-inch minnow, then drop it to the bottom and hop it along as the boat drifts downstream. Actually, there’s a little more to it, especially if there’s any kind of wind, which affects the speed of the drift relative to the current. The idea is to keep your line as vertical as possible. That means you’ll have to drift at exactly the same speed as the current. With an upriver wind, use the trolling motor to pull the boat downstream; with a downriver wind, pull it upstream. Keep adjusting boat speed until the line stays vertical. This way, you’ll be able to detect even the lightest strike.

Another fine point: Experiment with the intensity of jigging action until the walleyes let you know what they want. When they’re feeding actively, they may prefer strong twitches that lift a jig a foot or more from the bottom. But more often, subtle movements of only an inch or two will catch more fish. And when the walleyes are in a funk, don’t twitch at all; just hold the jig a few inches off bottom and let it swim along. Keep adapting the depth of the jig to the bottom contour.

Toward the end of the pre-spawn period, when the water temperature rises to the mid-40s, walleyes begin moving into their spawning areas. Look for them along gravelly, rocky or riprap shorelines brushed by light to moderate current. Spawning areas that have a wide 4- to 8-foot-deep shelf protruding from shore hold more fish than those that slope sharply.

More trophy-caliber river walleyes are caught toward thee end of the pre-spawn period than at any other time of year. If I could fish for only one week in the year, the last week of the pre-spawn would definitely be it. Not only are the fish tightly concentrated in their spawning areas, but they’re feeding much more heavily than they were earlier in the pre-spawn.

Shallow lakes might provide anglers who don’t live near rivers with their first opportunity to catch walleyes. Shallow lakes lose their ice cover before deeper lakes in the same area. They also warm up more quickly, so the walleye bite starts sooner in the spring. In some northern states, however, early-season walleye fishing might not be an option because the season is closed. Be sure to check state regulations before wetting a line.

As a rule, shallow walleye lakes are much easier to fish than deep lakes because locational patterns are far less complex. The walleyes are almost always oriented toward shorelines in early spring, so there is no need to explore deep structure or cover. Because of their fertility, shallow lakes normally have discolored water; consequently, fish have a comfort zone of turbidity and might feed at depths of only a few feet throughout the day.

My strategy for locating walleyes in shallow lakes is simple: I run the shoreline, watching my depth finder carefully for shelves that extend well into the lake. A productive shelf could be the extended lip of an underwater point or just an extension from a straight shoreline. I seldom find walleyes on shelves more than 10 feet deep and the fish often hold at depths of less than 5 feet, especially when the shelf is buffeted by an onshore wind.

You probably won’t have as much luck graphing walleyes in shallow water as you would in the depths; a better option might be to cast a jig or crankbait. Once you find a likely looking food shelf, use the trolling motor to keep the boat within casting distance and then make a few “sample” casts to determine if the fish are there.

Once you find a shelf with some active feeders, toss out a marker and fan-cast the area thoroughly. If you catch a few fish on a crankbait but the action winds down, switch to a jig and minnow and try that rig before you move on. The slower presentation should put a few more fish in the boat. Even in windy weather, I seldom use a jig weighing more than 1/8 ounce. If it’s relatively calm, a 1/16-ounce model works better yet.

In many cases, the bite in deep lakes lags behind that of nearby shallow lakes by as much as a month. As in shallower lakes, early-season walleyes tend to be shoreline-oriented, but their depth range is much more varied. On a calm sunny day you might find them at depths of 25 feet or more, but they might be shallower than 5 feet on a windy day or after sundown. It’s possible to find a few walleyes anywhere along the weed line, but points and inside turns generally hold the most fish. Another prime location is a shallow hump within a short distance of shore.

When I suspect the fish are deep, I spend a lot of time scouting with my graph. I normally try to follow the weed line, looking for the telltale marks that could be walleyes.

Once I spot marks that might be walleyes, I lower the trolling motor and work a jig or slip-sinker rig baited with a minnow or leech through the fish zone. Walleyes in clear water are often fussy, so it might take a bit of experimentation to determine the bait and presentation they prefer.