How to Find Spring Walleyes Fast 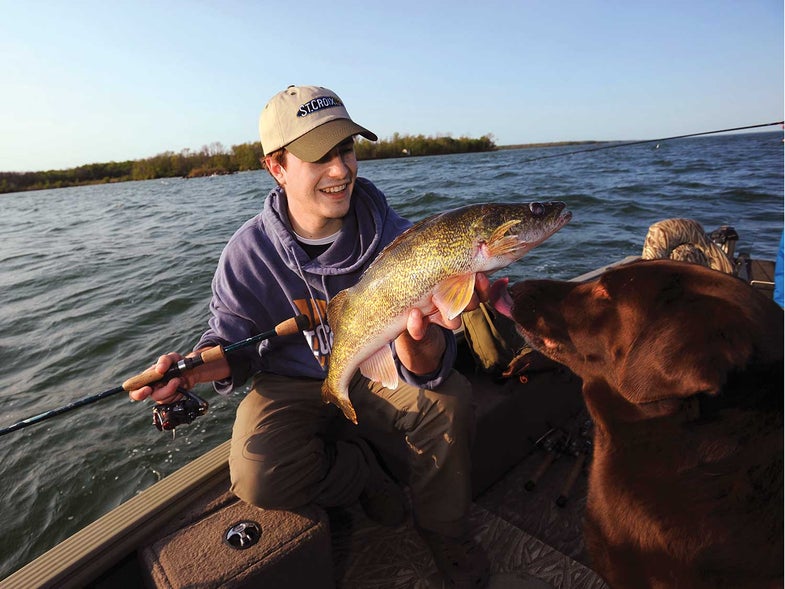 No matter how good you think you are, or how long you have been doing it, there remains one immutable truth about fishing: Fish move, and sometimes you can’t find them. That was precisely my mindset while I was guiding for walleyes last spring. After driving around on plane and graphing for fish for nearly an hour, the glaring looks from my impatient clients turned to vocal disdain. They wanted to get their lines in the water—pronto. An hour more and many miles later, a few little yellow dots finally appeared on the sonar. When I saved the waypoint on my fishfinder, the criticism grew even harsher.

“What the hell is that for?” one angler said. “We aren’t after BBs.”

I circled around until the marks dissipated and set up. Those “BBs” turned into giant yellow banana-peel-like walleye marks, which turned into bent rod tips. And that’s the way spring walleye fishing often goes. Although springtime can be one of the best times to catch a giant walleye, inconsistent water temperatures can make fish lethargic one day but aggressive the next.

After the spring spawn, walleyes leave the bays, rock reefs, and rivers on their way to main lake basins or other areas of deep water. Unlike the iconic mass spawning runs of salmon, however, this migration does not take place all at once or to the same place. And that’s what can make finding walleyes difficult—even for veteran anglers. Fortunately, advancements in electronics have made locating these itinerant fish easier.

The current crop of affordable LCD sonar units feature virtually real-time display, allowing anglers to mark fish while running at speeds in excess of 20 mph. Now you can break down a lake or search for the bite until you actually find fish.

One of the keys to this run-and-gun approach is proper transducer location. If it’s mounted too high or too low in relation to the hull bottom, the prop rotation, kicker engines, or the keel can interfere with your bottom reading. You’ll also need to set your sensitivity properly or your screen will black out while the boat is running on plane.

When you’re driving at 20 mph, marked fish will appear like little specks or balls. At slower, inspection speeds, they will transform into the more traditional arch as they move through the cone angle. When returns have just a touch of color in them, it is much easier and more accurate to interpret them as a catchable-size fish. My rule of thumb is: No color, no good. Elongated marks are typical of baitfish pods and weed patches.

Whether I’m fishing a river, lake, or reservoir, speed-trolling crankbaits is my go-to tactic. The cranks trigger reaction strikes from aggressive fish, but the true benefit of trolling at speeds of 2 mph or more is the ability to cover large stretches of water more quickly while at the same time cutting down on junk fish strikes.

Speed-trolling demands a hunting-­style crankbait. These dart left and right without any predictability. If non-target species pose a problem, consider upsizing your offering. A Deep Little Ripper or a full-size Reef Runner will help you fish more effectively.

Begin the hunt in deep water near spawning grounds—typically at 25 feet and extending to as much as 60 feet deep. The biggest fish will spawn first and then head to the deepest haunts as they recover, looking for temperature-sensitive baitfish. Prime areas are basins, troughs between islands, shoals, and anywhere deep water is in close proximity to reefs.

Whether your walleyes are moving up or down, in or out, or are just generally difficult to find, hit the throttles and get on the move. High-speed trolling will help you find the bite.