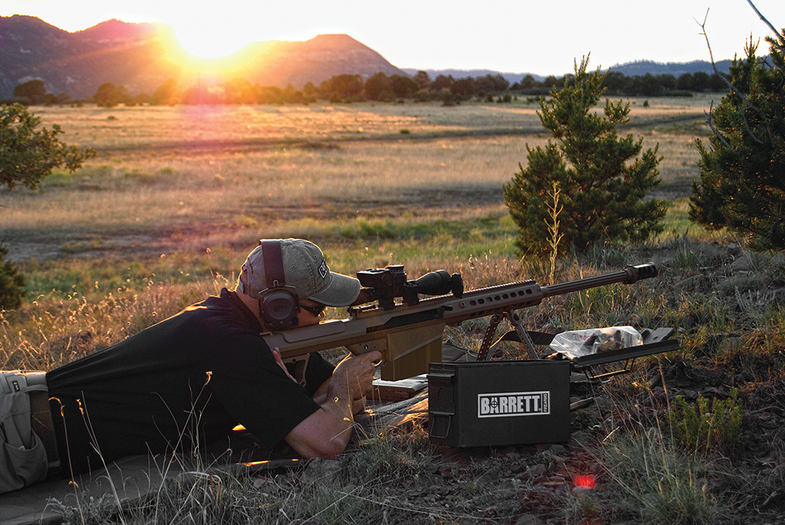 Turning in a sub-MOA group at 1,000 yards (5 shots in a 10-inch circle) is an impressive feat. You can’t expect that performance out of a cartridge that was originally designed for substantially larger targets—like fighter planes and ships—right? Don’t tell that to Barrett, which has revamped its M107A1 .50 BMG.

“We’ve been working with this gun for 30 years, and we saw room to make a bunch of improvements all at once,” says Chris Barrett, president of the company.
Here’s a look at what they did.

Tune up the ammo
The first thing Barrett engineers had to do was get ammo that would fire precisely and consistently. There isn’t .50-caliber match-grade ammunition readily available, and much of the .50 BMG ammo out there was made to be fired through a machine gun, Barrett says. That means lower tolerances and mediocre accuracy at best. That might be fine for laying down suppressing fire, but Barrett needed a consistent round to fine-tune its rifle against, so the company decided to load its own ammo.

Barrett used 647-grain Barnes TAC-X, Winchester primed cases, and Alliant Powder Reloader 50 to turn out muzzle velocities of 2,750 fps. It’s not a super-high-­performing long-range round (with a 100-yard zero it drops about 10.6 mils at 1,000 yards), but it shot consistently, Barrett says. The company is now working with Lapua to develop match-grade ammo that will be available in the near future.
**
Barrel and Chamber Improvements**
From there, Barrett took over the manufacturing of its barrels, bringing in blanks and running them through its own CNC machine. It started using match-grade single-­point-cut barrels that are hand-lapped, Barrett says.

“This is like what guys are putting on their one-off benchrest rifles. That’s what is on our production gun,” he says.

Taking over barrel manufacturing also allowed the company to perfectly cut the chamber into the back of the breech. “That improved alignment of the chamber, and better dimensions of the chamber was probably 75 percent of the puzzle,” says Chris Barrett.

There was a little slop in the neck and throat of the chamber, and those tolerances were tightened.

“The machine-gun chamber is sort of big and floppy because it has to run on full-auto like a scalded dog in the middle of the desert. A sniper rifle that holds only 10 rounds doesn’t see that rate of fire. So, we’ve optimized our chamber for precision.”

Tuning the Action
Most sniper rifles are bolt-actions, not recoil-driven semi-autos with a lot of moving parts. On the M107A1, the whole barrel moves back under the recoil of the shot to eject the fired shell and load the next one (the semi-auto action helps make the recoil surprisingly easy on the shooter).

So, Barrett engineers went through a guess-and-check process, making a single adjustment to the action and then testing a prototype gun to see if the change improved accuracy. Barrett also enhanced its bolt carrier for better alignment between the bolt and barrel.

“We have stacks and stacks of three-ring binders and test reports that back up all these changes,” says Chris Barrett.

Suppressor-Ready
Adding weight (like a suppressor) to the barrel of a recoil-driven semi-auto changes the dynamics of the action because there’s more mass moving back on the gun. So, the company went to work, further tweaking the action to accommodate its suppressor. Because of this, Barrett suggests only using its own suppressor on the gun since that’s what the action is tuned for.

“It wasn’t just a matter of figuring out how to attach a suppressor to the rifle. We had to make changes to the action, primarily in the bolt carrier, so the rifle could handle the increased speed of the action,” Chris Barrett says. “We redesigned a more robust bolt latch that could handle the extra force without putting any extra pressure on the rest of the rifle.”

Fighting Weight
The last major change: Barrett slimmed down the M107A1 by 5 pounds to a dainty 28.7 pounds. The engineers replaced steel parts with titanium in the bipod, monopod, and barrel key. Titanium is lighter than steel but doesn’t perform well on sliding parts, so it was used sparingly, Chris says.

The upper receiver became 700 series aluminum, which cut down on weight and made the upper more rigid. “I hate to say anything negative about the old gun, but [the upper] was made of sheet metal, and it’s hard to make sheet metal fabrication that straight and that perfect,” he explains.

With all of its improvements, the new Barrett costs about $12,000. In terms of accuracy, what had been a 2 MOA (or more) platform is now capable of 1 MOA, especially once the trigger is mastered through dry-fire practice.

“We’re precision shooters and we’re tinkerers, and we think the people who shoot our guns are, too,” says Barrett. “ I think they’ll appreciate what we’ve done here.”