An affordable, and portable, chassis rifle

In just a few short weeks, a good number of long-range rifle shooters will scribble wish lists to Santa, hoping that they’ve behaved well enough this year to merit the thing they covet above all else: a chassis-style bolt-action rifle.

The reason for this appeal to a higher power is that chassis rifles carry price tags that seem more in line with the down payment on a new truck than a new firearm. But they embody everything these riflemen crave in terms of accuracy and ruggedness. The precise mating between the stock, which forms the bedding, and the action is what makes them unique and expensive.

If you don’t boast a Trump-like net worth, fear not. Mossberg has figured out a way to bring chassis-style construction and performance to the masses for a fraction of the cost.

The Future Is Now

To an older generation of hunters and shooters, the Mossberg MVP-LC—the “LC” stands for Light Chassis—looks more like something you’d see in Star Wars than in hunting camp. But the times they are a-changin,’ as Dylan told us years ago, and guns with a futuristic aesthetic are becoming the new norm.
One thing you might notice right away with the Mossberg is that the stock has a minimalist look. Most chassis rifles have bulky profiles, but this stock has been trimmed back significantly.

As a result, the MVP-LC weighs 8 pounds 7 ounces empty, with no optic mounted. This is several pounds less than a typical beefed-up tactical rifle, making the Mossberg a more viable option to tote around when you’re chasing game.

A good chunk of this .308’s weight is located in the 18 ½-inch medium-­contour barrel. (The MVP-LC is also offered in .223 Rem. with a 16 ¼-inch barrel.) The barrel is button-rifled and free-floated, and comes with Silencerco’s Trifecta muzzle brake, which is compatible with that company’s Saker sound suppressor.

The barrel is affixed to the receiver with a barrel nut, allowing for easy and precise headspacing. These attributes, coupled with the rifle’s free-floating bolt head, all help with the rifle’s accuracy. 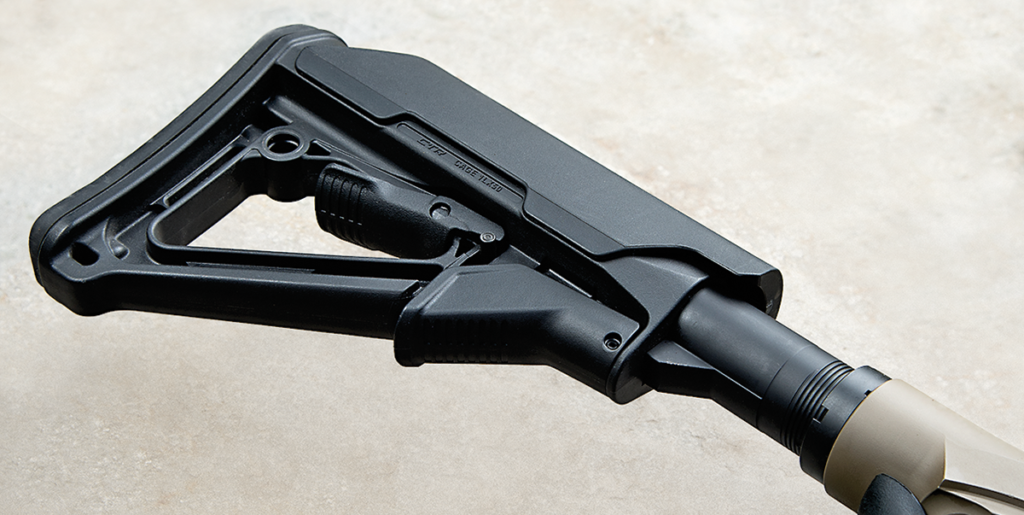 The Magpul CTR buttstock adjusts for length of pull and has a fixed, raised cheekpiece. If desired, the buttstock can be swapped for other AR-­compatible styles, though the replacement might require a different type of buffer tube, depending on the model.

The rifle shot everything well, but it was especially fond of Nosler’s 168-grain Custom Competition ammunition, turning in sub-MOA 5-shot groups every time, including one that measured .600 inch. Tallying all the ammo I shot, the MVP-LC’s 5-shot groups averaged 1.107 inches.

The rifle does have some design issues that affect its ergonomics and, consequently, its performance. The trigger reach—the distance between the pistol grip and the face of the trigger—is long, which makes it difficult to position the pad of the trigger finger flat across the face of the trigger, unless you have unusally large hands. The distance from the web of the grip to the trigger face is 3 inches, compared to the 2 ½-inch reach on several of my AR-10s. The consequece of this manifested itself during my accuracy testing, as my groups exhibited horizontal stringing, which is an indication of difficulties with trigger control.

On the other hand, the trigger, Mossberg’s user-­adjustable blade-style LBA model, broke at a crisp 2 ¼ pounds.

Another issue is that the magazine release is positioned far enough from the pistol grip that the shooter needs to rotate the trigger hand forward, breaking his grip, in order to depress it and remove the magazine. 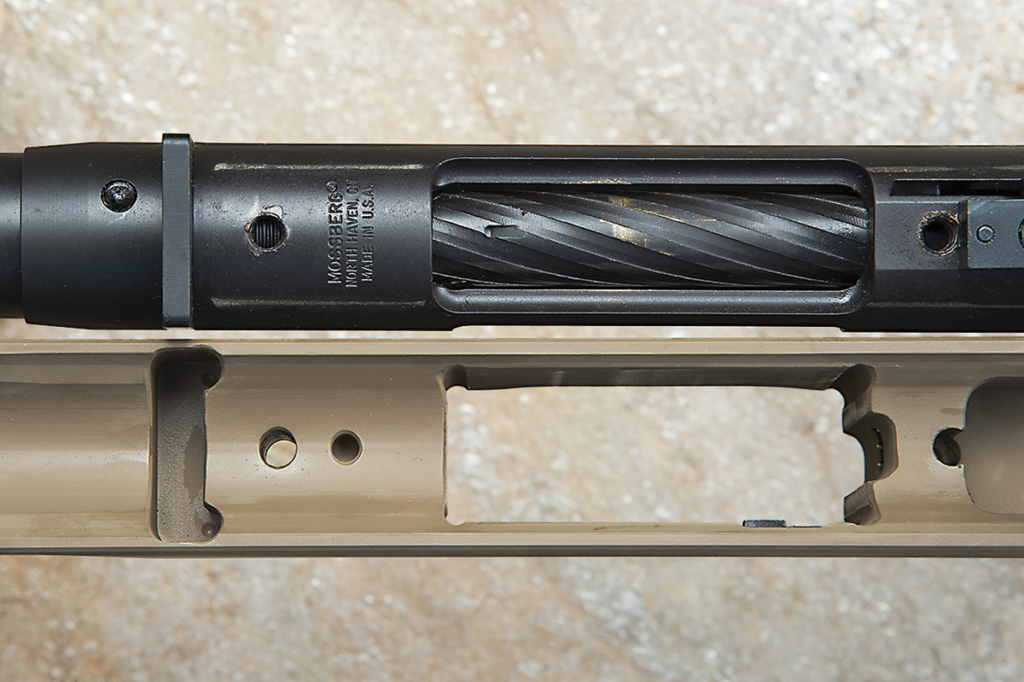 The action makes contact with the stock on the angled surfaces that run between the curved bottom of the stock inletting and the side walls of the stock. These areas provide solid support to the action, making the juncture rigid and helping the rifle’s accuracy.

The rifle takes standard AR-10 magazines and ships with one 10-round Magpul Pmag.

The rifle cycled smoothly for me and handled rapid-fire drills well, and it had no issues with the feeding, extraction, and ejection. The oversize bolt handle provided enough leverage to maintain a brisk rate of fire.

The rifle also shot well from various supported and unsupported field positions. The angles on the forend settled nicely into my palm and allowed me to make consistent hits on a 12-inch steel plate at 300 yards from the kneeling position.

This would make a fine hunting rifle for situations that don’t require hiking a lot. It’s also an excellent choice for recreational shooting at longer distances, and would hold its own in a sniper competition.