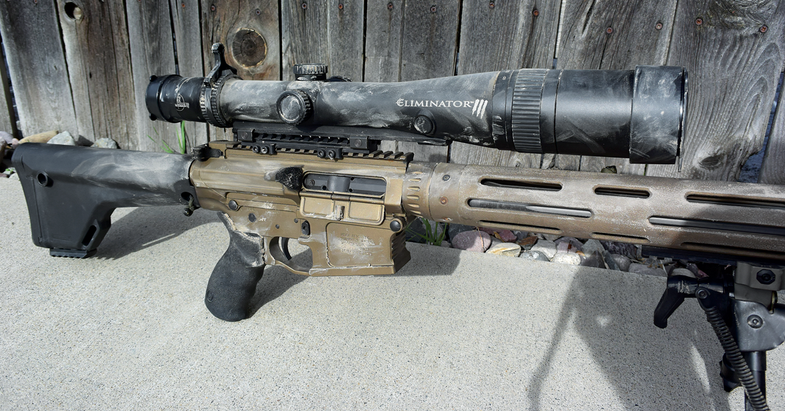 Then I heard about the Burris Eliminator III. Although it was initially designed for hunting, I wondered if such a scope would work for two-man team tactical matches.

I imagined my partner/carbine shooter blazing away at his targets (sans my help), giving me the autonomy to focus on my targets. We could cut our time at shooting positions by 20 percent. Brilliant!

I floated the idea to one of my friends, a fellow competitor. “Are you serious?” he said. “First, it’s a scope-rangefinder. Second, it’s a Burris.” The emphasis was heavily on Burris. He continued, “You’re asking for problems. The glass can’t be that good. What if you get a bad range?” Now he smelled blood: “What if it goes down in the middle of a stage?”

I acknowledged his lengthy, yet valid, concerns. True, there is a lot going on inside a scope-LRF (laser rangefinder) combo. Could you really trust it, or was it just a high-priced gimmick? (Prices start at $1,799.)

A month after that conversation, I took a chance and ordered one. I expected a scope the size of the Hubble space telescope. I was pleased to see that it was roughly the size of my long-range tactical scopes and weighed less than some of them.

I had read mixed reviews about the data-input system. But following a brief review of the instructions, I input the drop at 750 yards for my .260 Rem. gas gun, and the BC of the bullet I used, the 123-grain Sierra Match King.

I called my friends Dave Schafer and Austin Hecker to report my findings and schedule a group trip to the range, for further testing and practice. They were skeptical of my results, but intrigued.

Two days later the three of us went to the range and took turns using the Eliminator III, burning through another 150 rounds. Out to 1,100 yards, it never failed to give us a range, whether on rock, bush, or steel target. The reticle automatically compensates, giving the shooter a dot that goes on the target. And there’s no need to dial the scope to a certain power level—it works at any magnification.

Dave called me a few days before the Stillwater Tactical match. “Have you seen the weather report? It’s bad,” he said. The weather report called for 40 degrees, rain in sheets, and big doses of wind. Dave expressed his concerns: “Do you think that the Burris will hold up? What if it can’t get ranges?”

I felt a sudden twinge of responsibility. Using the Burris was my idea, and if it failed, I would be letting Dave down.

If the Eliminator III is unable to range a target, it displays a series of BDC dots that give you holdovers for 200, 300, 400, 500, and 600 yards. The BDC dots work well, but the windage marks—which are on the etched reticle and are calibrated to give you 1 mil readings at 16X—are not as flexible.

We arrived at the Long Range Dynamic Course on Saturday morning at 7 a.m. It was immediately obvious that the weather report had been optimistic. We headed to the start line, water already running in streams off our guns.

Through the first four stages, the Eliminator III never failed to get a range and issue the appropriate drop compensation. Target distances were between 200 and 500 yards. By the time we arrived at the final stage, Stage 5, the fog had become so thick that we could hardly see the red carbine targets, and the blue precision rifle targets had completely disappeared. “We can’t see the blue targets and we even know where they are,” offered our RO, showing some sympathy.

On Stage 5, the Eliminator was able to range all of our carbine targets except for one. Through the rain and fog, I could barely see it with the spotting scope. We were able to get a range on it—628 yards—using a Vectronix PRLF 15c. Dave used the BDC dots, and somewhat to our surprise, scored two hits.

To put this in perspective, the team behind us failed to get ranges with a Vectronix Terrapin, one of the most popular and capable rangefinders on the long-range competitive circuit. I became a big fan of the Eliminator III that day. While the conditions might not have been the worst ever encountered, they were as bad as anything I have hunted in here in Montana.

In the past, I’ve missed opportunities on game because I was futzing back and forth between my gun and the rangefinder. The Eliminator III eliminates futzing.

The Eliminator III does calculate a wind hold for you, based on a 10mph wind. However, it is still up to the shooter to correctly estimate the actual wind value.

This scope is a game-changer. It greatly simplifies range estimation and drop compensation, two big steps in long-range shooting.

This season, you can bet this scope will be on top of my hunting rifle, and I know Dave will want it on our long-range carbine for future team matches.