How to Assemble an Affordable Precision Rifle

Shoot accurately at long ranges without breaking the bank 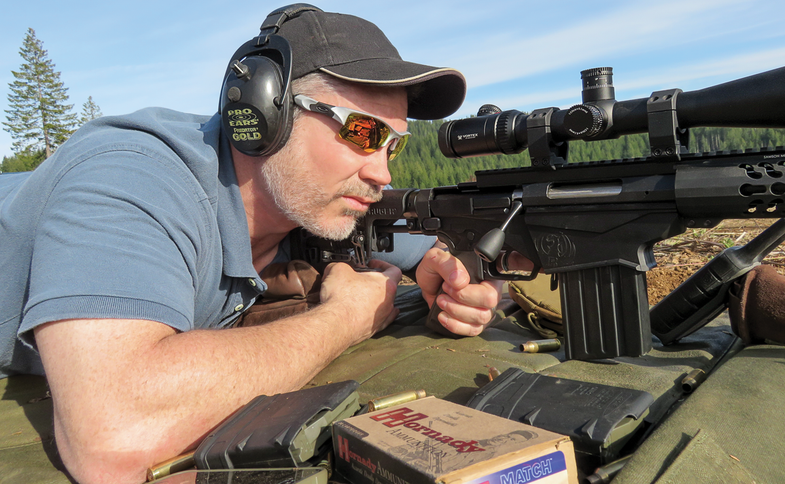 Within recent memory, the ubiquitous long-range rig was a heavy-barreled, composite-­stocked bolt-action .308 Winchester. Topped with a tactical scope zeroed for Federal Gold Medal Match ammunition, it was, figuratively, standard issue—a proven setup that an average shooter could put together without having to check the latest interest rates. Now the firing line at a precision rifle match looks and sounds much different. New sub-.30-caliber cartridges shoot softer, fly farther, and buck the wind better. Bolt-actions look more like ARs with chassis, pistol grips, and handguards. Optics are more capable, with sophisticated reticles for precise holdover shooting. While innovations continue to stretch the limits of range and accuracy, they also continue to stretch the limits of most shooters’ wallets.

With rifles costing more than $4,000, and many of the suitable scopes in the same financial district, a shooter can spend more on a precision rifle and accessories than many people spend on a budget car.

The situation: I wanted a new long-range setup to shoot local and regional precision rifle matches, but I didn’t want to have to put a divorce attorney on speed dial. The question: Could something with true competitive performance be put together for less than $3,000?

Precision rifle competition is dominated by 6mm and 6.5mm cartridges like the 6.5 Creedmoor, 6mm Creedmoor, 6×47 Lapua, and the .260 Remington. The bullets are more aerodynamic, stay supersonic longer, and resist wind drift better than standard .308-caliber projectiles. Many top cartridges are a handloading-only proposition, but I wanted to spend more time shooting and less time reloading, so I landed on the 6.5 Creedmoor as my best choice. A competitive cartridge at a reasonable price, the 6.5 Creedmoor comes in a good selection of match loads from Hornady, Nosler, Prime, and Winchester.

To save time and money, and skip any ill-advised attempts at garage-engineered gunsmithing, I wanted a rifle that required no modifications. There are quite a few capable and reasonably priced rifles on the market, but the one ready to roll straight from box to bench, chambered in the 6.5 Creedmoor, and featuring readily available detachable box magazines is the Ruger Precision Rifle.

Introduced mid-2015, this rifle has quickly gained acceptance with long-range shooters—and for good reason. It’s well thought out and provides competitive performance at a reasonable price. At a glance, it looks like a bolt-action AR-10. In reality, it is a scratch-built precision rifle perfectly capable as is, yet it is easy to customize. Part of the rifle’s appeal is its modularity. With the advantage of AR-15 geometry, there are hundreds of aftermarket parts and accessories that can be added, including stocks, grips, safety selectors, and handguards. Aftermarket accessory and parts manufacturers have stepped up with options for some proprietary components as well. That’s usually an indication a rifle is going to be popular.

The Precision Rifle features a steel action joined to what looks like an AR-style lower receiver machined from 7075-T6 aluminum. The lower receiver houses an adjustable trigger, a safety selector, and a patent-pending magazine well, which works with a number of different magazines. The Samson Evolution KeyMod handguard attaches to the front of the steel action, but any free-float-style AR-15 handguard will work. The hinged folding stock is adjustable for comb height and length of pull, with quick-release levers for easy, no-tools-required fitting. Any AR-15 buffer tube and stock can also be used. The Precision Rifle comes with a KeyMod QD sling attachment point, a Picatinny rail section, and a standard sling swivel stud for bipod attachment. These included accessories are a nice touch. Another is the included 20 MOA Picatinny rail factory mounted to the receiver.

Precision rifle competitions require shooting targets anywhere from 100 yards to possible extremes of 1,600 yards. Time is a factor, and it’s not competitive to dial elevation adjustment for every shot. That’s where a good holdover-style reticle comes in. For this build, I wanted a scope with a “Christmas tree”-style reticle in mils on the first focal plane, side parallax adjustment, target knobs with 1/10 mil per click adjustment, and a 30mm tube. The Vortex Razor PST 6–24x50mm FFP with the EBR-2C reticle has these features and can be purchased for less than $1,000. Any AR-15 scope mount will work, but I opted for AR-height Seekins Precision scope rings. They are solid rings and save a little weight.

So at this point, the rifle, scope, rings, and some get-started ammo cost less than $2,500. Financial collapse averted. But how does it shoot? In a word, great.

With Hornady 140-grain ELD match ammo, 5-shot groups just more than 0.5 inch at 100 yards were common. I didn’t have enough ammo varieties for comprehensive testing of different loads, but indications are quite good.

The rifle-scope-ammo ensemble worked just as well off the bench and in the field. Shooting prone from a bipod and off various stumps, rocks, and dirt banks, hits on a MGM 20-inch-square flash target at 833 yards were consistent. As a 3-Gun shooter, I liked the AR-style ergonomics that made various shooting positions comfortable and familiar. The scope enabled consistent hits using both the holdover reticle as well as the elevation knob to dial in adjustments. It was easy to see targets—and impacts—at that range. Up next, I plan to shoot farther in less windy conditions to see how small a target I can hit consistently.

Is it perfect? Of course not—few things are. The handguard is round and not great for shooting off a bag or barricade, as it tends to roll side-to-side. Maybe it’s my lemon-shaped noggin, but the cheekpiece is wider than I’d like to easily get my eye lined up behind the scope. To smoothly close the bolt on an empty mag, I’ll apparently need to chamfer the back edge on magazine followers to eliminate interference between the two. These are minor issues, though.

The bottom line: This setup performs above its price point. The rifle and scope make for an out-of-the-box competitive long-range rig that is well thought out, well built, and fun to shoot. The availability of reasonably priced match loads means I can achieve my goal of shooting more and reloading less, which is good because the only real accuracy issue is the guy behind the trigger.