One of the hottest trends in shooting is performance-driven air rifles. We try out 13 models of every power and design (plus a few very innovative airguns) to help decide which hunting rifle is right for you. 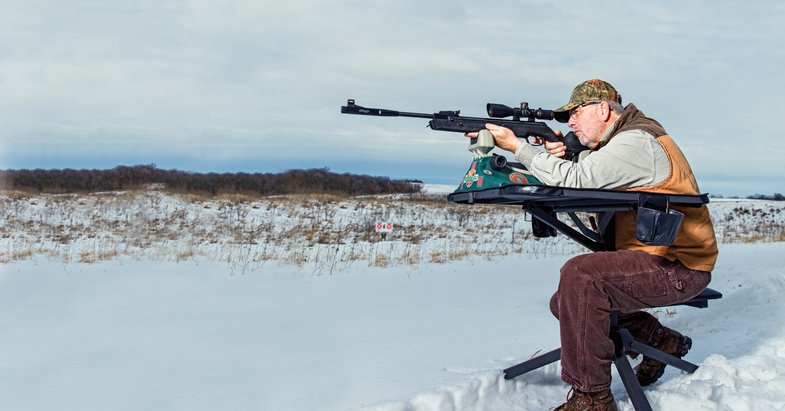 Most Americans of my generation have a common experience with airguns—a BB gun introduced us to the basics of shooting, followed by a multi-pump pellet rifle on our way to a “real” gun. Once we got those rimfires and shotguns, that was it for the airguns. But across much of the world, airguns are not the pre-game warmup; they are the main event. In societies where firearm ownership is severely restricted, airgun technology has evolved to fill the void.

Outside of the U.S., an enthusiastic airgunning culture has given rise to a technologically ambitious sporting gun arms race.

In North America, fewer regulatory restrictions and a broader selection of game to hunt and pests to shoot has fueled the development of more powerful airguns and a wider selection of calibers, some with enough punch for big-game hunting. Since these guns are also quieter and more limited in range than firearms, they are suitable for areas where noise and projectile travel are factors.

Our test was designed to assess both quantitative and qualitative capabilities of each gun. We considered accuracy and power, calculated by assessing projectile weight and muzzle velocity and expressed in foot-pounds of energy (ft.-lb.), and measured both cocking effort and noise. We considered more subjective factors­—shootability, ergonomics, and reliability among them—and then assessed the value of each model.

We matched each rifle with a projectile optimized for both accuracy and energy, and shot each gun from a bench, measuring accuracy of five-shot groups on targets placed out to 75 yards. We recorded muzzle velocity with a chronograph. We shot from field positions in order to replicate hunting conditions.

Hunting airguns use two primary power plants: spring piston or precharged pneumatic (PCP). Springers employ a spring-loaded piston contained within a compression chamber positioned behind the barrel. Cocking the gun causes the piston assembly to compress the spring. Pulling the trigger permits the spring to decompress. The piston is driven forward, compressing the air in the chamber, then through a transfer port and directly behind the pellet.

The PCP uses an external air source to charge an onboard reservoir, which allows the shooter to take multiple shots before refilling the reservoir. When the trigger is pulled, the hammer knocks opens a valve, allowing a small and precise volume of pressurized air to travel through the transfer port and then down the barrel, pushing the pellet in front of it.

Because springer and PCP technologies are so different, direct comparison between the operating systems is of limited use. Comparing a springer to a PCP is like comparing a muzzleloader to a centerfire.

In an effort to make even more useful comparisons, we grouped the guns into three categories: springers, standard-caliber PCPs, and big-bore PCPs. We also included a review of new airguns that don’t quite fit any of these categories but are interesting in their own right.

Fully self-contained, relatively inexpensive, and widely available, springers are the entry platform for most people getting started with airgun hunting.

I consider the German-made LGV one of the best-shooting conventional spring-piston rifles ever produced. Compact, with a well-designed stock, the LGV shot more accurately than any other springer in the test. The smooth firing cycle and match trigger are miles ahead of what you’d find with most springers on the market. In fact, this pricey production rifle is so smooth and well-finished that you might be forgiven for mistaking it for a custom-made air rifle.

Another German rifle, this is an example of a gas ram done right. The firing cycle feels silky smooth, and compared to most springers, it’s easy to keep on target throughout the cycle. Coupled with the Bavarian-style stock and a trigger that performs well after you adjust it to your dimensions, the rifle is a pleasure to shoot. This gun is relatively costly, but you will never outgrow it. We especially liked its finely figured wood and European-styled stock.

A break-barrel that uses a spring-charged gas piston to generate significant power, the Octane generated 19 ft.-lb. (foot-pounds of energy), which is quite good for this small caliber. The .177 rifle provides accuracy and good ergonomics. The gas ram provides a smooth and consistent cocking action, and the noise- and vibration-free firing cycle made it a pleasure to shoot. Shot-to-shot, this was one of the most consistent shooters in the springer class.

The Turkish-made .30 Carnivore is a handful of gun. This rifle combines accuracy with a lot of power. But because the spring required to push a .30-caliber pellet is so stout, you need to work to make it a consistent shooter. Substantial cocking effort makes this a gun more suitable for hunters taking a few shots at a time, as opposed to an all-day plinker. Prior to this .30 Big Bore Carnivore, .25 was the largest caliber available in a springer.

This category represents the cutting edge of hunting airguns. they are accurate, powerful, multi-shot rifles that are quiet, light recoiling, and expensive. When you consider that you also need specialized filling gear, these are investment-grade guns. But once you take one hunting, you’ll recognize the performance and shootability are worth the price.

This British rifle incorporates all the elements we consider key for a small-game hunting gun. It is accurate, easily knocking out sub ½-inch 50-yard groups. It has plenty of power (28 ft.-lb.) for bigger varmints such as groundhogs. It offers a high shot count on each 3,000 psi fill of air. And it has a robust and reliable magazine design, a great trigger, and an innovative semi-bullpup style that delivers all the compactness you could want in a hunting rig. It’s a pure shooter.

The TDR stands for Take Down Rifle. This gun has been around for a while in the U.S., but because it was developed for the low-power British market, it didn’t gain much traction here. But a new high-power configuration allows this little tack driver to deliver pellets at 28 ft.-lb. of energy, making it a legitimate hunting rifle. The Take Down Rifle can be slipped into a pack and discreetly taken anywhere. It’s also one of the quietest guns in our test.

This is the first bullpup design from a company that has introduced many interesting guns over the last decade. The Gladius is a hefty package (10.2 pounds), but it’s powerful, remarkably quiet, and available in several calibers up to a .35, allowing you to size your gun to quarry from squirrels to hogs. The gun features plenty of rails to mount accessories. And because the cocking action is located in front of the trigger, it can be cycled rapidly.

Gamo is one of the few names you’ll recognize here if you’re not already an airgunner. The company makes solid spring-piston rifles that are sold in big-box stores and other familiar outlets. This Gamo PCP (our sample was in .22) is new to the market and offers excellent performance in terms of power, accuracy, and shot count, all delivered in a quiet and ergonomic package. Most noteworthy is its price, well below that of most guns in its class.

So you’ve been hunting for years and are looking for a new challenge. Try a big-bore airgun for predators, hogs, deer, and exotics. More states are opening seasons to airgunners, and the industry is responding with an ever-wider selection of guns.

This lightweight .357 bullpup rifle is accurate and powerful, and thanks to an integral shroud design, it’s quiet and compact, too. The Slayer stands out with a six-round magazine, a premium trigger, and very good ergonomics. Its price puts it out of reach of the majority of shooters, but it’s a gun any big-game or predator hunter can aspire to.

Airguns of Arizona entered the industry as importers of high-end European air rifles. But the Bushbuck is a .45-caliber, 600 ft.-lb. hunting machine designed in-house and manufactured to the company’s specs. It’s a big rifle with adjustable power settings, letting you prioritize power or shot count, depending on the shooting or hunting situation.

This is the original big-bore air rifle, and it remains the benchmark against which newcomers are measured. The Outlaw employs a simple double-bolt design; one allows access to the loading port, and the other serves as a cocking arm. This gun generates up to 500 ft.-lb., and with 320-grain pellets, I’ve used it to take African kudu.

It used to be, if you wanted a gun that performed on par with the sleek .40-caliber Badger, you could expect to pay a significant amount of money. This single-shot, 250 ft.-lb. gun is not only a bargain, it’s very accurate, producing a three-shot cloverleaf at 75 yards. Powerful enough for hog-sized game, the shot-to-shot consistency is very good.

AirForce was the first American company to build production PCPs. Last year it released this innovative and very powerful .45-caliber rifle. This side-lever-cocking rifle generates more than 500 ft.-lb., making it one of the most muscular production air rifles on the market, capable of handling large deer and other big game. The company is extending the product line to .357 and .308 calibers, giving coyote hunters a great airgun option.

Consider this a catchall grouping of products that don’t fit anywhere else but that are so innovative and interesting, they deserve discussion here.

Earlier this year, the American airgun manufacturer Crosman released the Pioneer Airbow under its Benjamin brand. This is a PCP that has had the standard barrel replaced with a small-diameter tube. A crossbow bolt slips over the tube, and utilizing the PCP technology, launches the bolt at velocities topping 400 ft.-lb. with good accuracy.

Call this an “air shotgun.” New from Air Venturi, one of the largest airgun retailers in the country, the Wing Shot is a PCP-based .50-caliber shotgun that utilizes shotshells loaded with No. 7 or No. 8 shot. The gun delivers consistent and fairly tight patterns at 25 yards. I have taken small game and doves on the wing at 25 yards with it.

This CO2 replica is accurate and fun to shoot. And because it mimics the weight of an original MCX rifle, it is an excellent training gun. The reason we include it is because SIG will be releasing hunting airguns in the near future. When a major firearms company moves into airguns, it speaks volumes about the projected growth of the niche.