A tactical hunting rifle that is accurate and rugged

Let the older generation crow about how tough men used to be, but you wouldn’t see members of the Old Breed hauling a 12-pound rifle up a mountain to hunt elk. So how has it come to pass that some hunters today are doing just that?

I blame technology. With the advances we’ve seen in the last couple of decades in electronics, bullet construction, propellants, and optical sights, to say nothing of the jaw-dropping accuracy that even bargain-price production rifles can deliver, it’s only natural that some hunters and shooters would seek to push the performance envelope, and with extreme accuracy comes heft.

This trend has caused some serious rifts among hunters—and has brought to the fore age-old questions about what constitutes ethical hunting. Some traditionalists go cross-eyed at the thought of shooting an animal at 400 yards, while there are plenty of skilled marksmen for whom shooting at that range is a chip shot. But I’m not looking to dive into that debate right now. As with other advances that have caused boundaries to be redrawn—­remember when laser rangefinders first came on the scene?—we’ll figure it out.

In the meantime, we’re seeing a number of interesting hybrid firearms, like the Montana Rifle Company MMR. 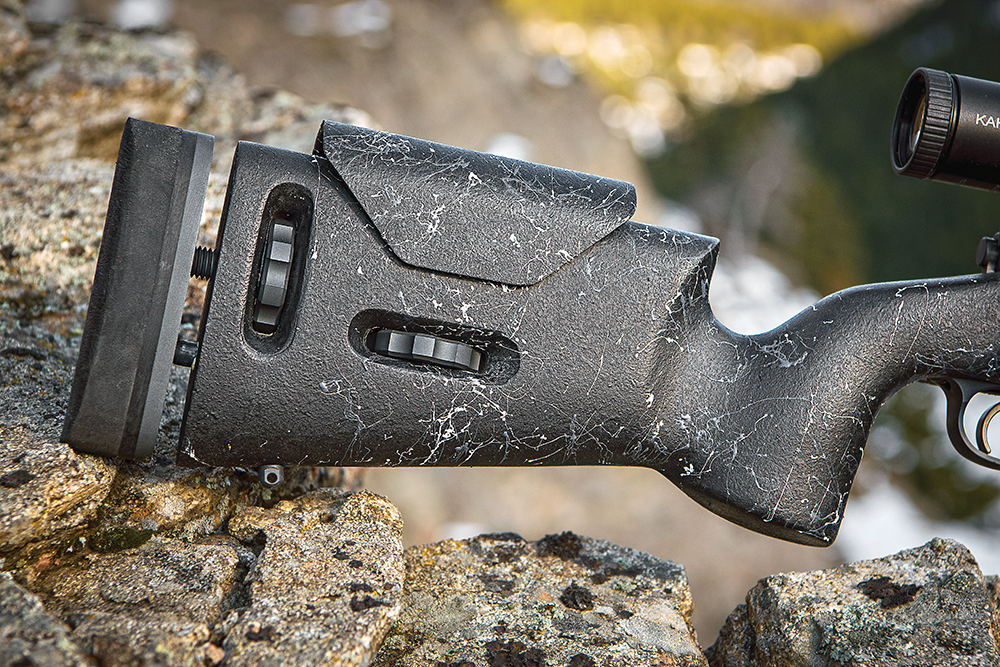 Notable Features: Changes to length of pull and comb height are made via recessed wheels in the buttstock that adjust by hand, without tools, making it simple to alter those dimensions in the field. The length of pull can be extended by 1 ¾ inches, and the comb height can be jacked up by a little over 1 inch.

The heart of the MMR is Montana Rifle Company’s M1999 action. It is a two-lug, controlled-round-feed action with a three-position M70-style safety on the bolt shroud. Best thought of as a combination of a Mauser 98 and a Model 70, the M1999 couldn’t be more of a traditional hunting action. But throw on a heavy barrel, an oversize bolt knob, a beefy stock that adjusts for cheek height and length of pull, and an extra swivel stud for mounting a bipod, and the rifle morphs into something that would have left Jack O’Connor scratching his head.

Smart Ergonomics
Prone shooting is the MMR’s sweet spot. The vertical pistol grip positions the hand so that the shooter has excellent trigger control. The rifle has a Timney trigger set to 3 ½ pounds, which is heavy enough to be safe under rugged hunting conditions, but it breaks cleanly for precise shooting.
The fiberglass stock has a spiderweb texture added over the matte black base that provides good grip and nice visual flair. The Cerakote on the metal also looks good and keeps the stainless-steel barrel, action, and bolt protected from the elements. The rifle was built to take a beating.

Versatile Shooter
Both the action and the barrel have been hand-lapped, and the rifle runs very smoothly. The large claw extractor grabs onto the cartridge rim early in the feeding process, providing excellent control over the round, and it has enough leverage to yank out even sticky cases. The action also handles single-fed cartridges. If you toss an individual round into the action and ram the bolt home, the extractor will jump over the case rim.
One of the nice attributes of this rifle was how well it shot from sitting and kneeling positions. Just in front of the magazine floorplate, the stock forms a lip along the forend. That lip nestles perfectly into the palm of the hand and is located at the precise balancing point of the rifle. Holding the rifle steady in these positions required surprisingly little effort.

A New Cartridge
Standard calibers for the MMR include the 6.5-284 Norma, .308 Win., .300 WSM, and .300 Win. Mag., and it is available in either right- or left-hand actions. Those are all fine cartridges, but I had my sample chambered in something different—a wildcat based on necking the .375 Ruger down to a .30-caliber. Call it a .30-375 Ruger or a .300 Hornady Short Mag., given that Hornady did the cartridge development on this intriguing thumper.

We’ll go into this new cartridge in greater depth in a future issue, but it has the makings of an excellent round for long-range big-game hunting and for target shooting at extreme long ranges. Here’s a quick synopsis: This cartridge drives heavy bullets, like the new Hornady 212-grain ELD-X, at speeds between 2,800 and 2,900 fps out of my rifle’s 24-inch barrel. With a 26-inch barrel, we’re looking at close to 3,000 fps, which means that this round will be able to effectively engage targets at distances out to 1 mile or more. For hunting, this cartridge will be able to deliver excellent results on larger big game, like elk, at any reasonable distance. For comparative purposes, this cartridge falls somewhere between a .300 Win. Mag. and a .300 Ultra Mag.

My initial load development has focused on slow-burning powders like H1000, Retumbo, R-25, IMR 7828 SSC, and H4831 SC. Accuracy from the MMR has been good, with three-shot groups ranging from ¾ inch to a bit over 1 ¼ inches.
The MMR and other rifles like it aren’t for everyone. It is a high-performance, admittedly hefty rifle that will appeal to that subset of hunters who are willing to hump it through the woods and mountains in exchange for the knowledge that when it comes time to make a difficult shot, their gear will be up to the task.