Every winter I get a couple pallets’ worth of centerfire ammunition to run through the new rifles in Outdoor Life’s... 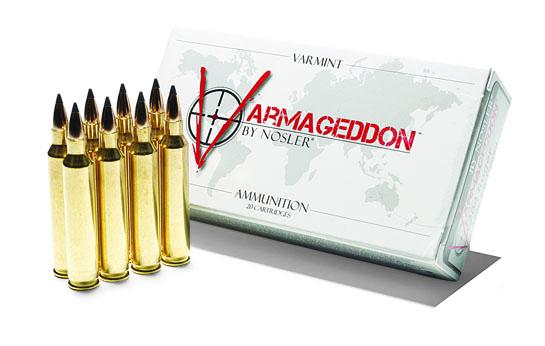 Every winter I get a couple pallets’ worth of centerfire ammunition to run through the new rifles in Outdoor Life’s annual gun test. The ammo comes from every major manufacturer and includes broad samplings from within each maker’s product line. I order everything from best-in-class match ammo to cheapo loads. I also make sure to get a mix of products that are tried-and-true as well as newest stuff to roll off the production line.

This is done in an effort to ensure that our head-to-head gun test produces valid results. Run all that ammo through the guns and the data tells you a lot about the rifles.

But this road runs both ways. Using the same batches of ammo in all those rifles tells you a lot about the ammunition as well.

One of the new loads this year was Nosler’s Varmageddon line. As you no doubt can guess, it is meant for varmint shooting, which calls for light, small-caliber bullets that are accurate and deliver violent upset on impact.

Nosler is offering the flat-based bullets in four calibers–.17, .204, .224, and .243–and two bullet styles: polymer-tipped and hollowpoint. Initially we shot Nosler’s 55-grain .224-inch bullets in .223 Rem. ammo, running them through five different rifles during the gun test. The results were so impressive that I then proceeded to run the ammo through a number of my personal guns and other rifles I planned to evaluate.

Accurate and Consistent
During the test, Varmageddon was the most accurate .223 round, which is quite an accomplishment, as we shot many proven, quality loads that have no difficulty delivering sub-MOA groups.

We shot 20 five-shot groups with the 55-grain load under the kind of nasty conditions that are the hallmark of Montana winters along the Rocky Mountain Front. Despite the wind and snow, the overall average of these 20 groups was .849 inches, and only three of the 20 groups were more than an inch in size. In every rifle, it shot at least one sub-.700 inch group, including one that went .462 inches.

Next, I procured some .22/250 Rem. Varmageddon ammunition using the same 55-grain bullet and chronographed it through a heavy-barreled Savage M12. I ran a 15-shot string through my Oehler 35P chronograph. The mean muzzle velocity was 3,609 fps–60 fps faster than advertised–and the extreme spread in velocity was only 54 fps, giving a standard deviation of .0014, which is excellent in factory ammo. This consistency helps explain the ammo’s accuracy.

In the Field
Nosler is marketing the ammo with a cute (to a gun nut, anyway) ad campaign that shows nervous prairie dogs and coyotes holding signs (“The End Is Near,” etc.) predicting their doom.

After spending two days in eastern Montana testing the premise on prairie dogs, I can state there’s as much truth as humor in the assertion.

The bullets are constructed with a thin jacket near the tip of the bullet that tapers to a thicker wall at the base to promote rapid upset on impact, which is exactly what happened. I had brought along a couple of personal rifles, but I did most of the shooting with Nosler’s new Varmageddon AR, which is a complete rifle kit–including a scope–that Nosler is doing in conjunction with Noveske Rifleworks and Leupold.

The wind was howling the first day, making for challenging shots, but the rifle and ammo were good for hits to nearly 500 yards.

I also shot Varmaggedon with my Rock River Arms Varmint A4 in .204 Ruger. If you haven’t spent time with this cartridge yet, you’re a deprived soul. The 32-grain Varmaggedon bullet exits the muzzle at 4,000 fps and shoots flat and accurate. It sent many a prairie dog to whatever final reward awaits them.

Given its accuracy, whichever the rifle, the quality of its construction, and its critter-splattering performance in the field, Nosler Varmaggedon is off to a hell of a start.