Photo by Yamil Sued The .223 Remington, which celebrates its 50th anniversary this year, is a miraculous little cartridge. Legions... 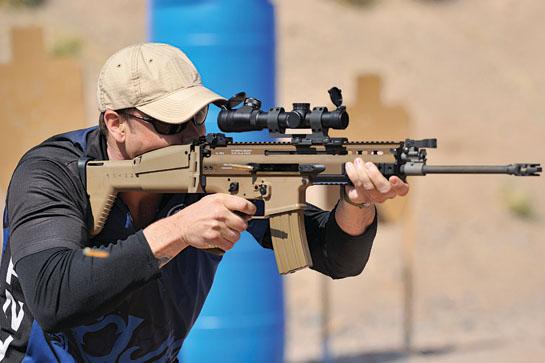 The .223 Remington, which celebrates its 50th anniversary this year, is a miraculous little cartridge.

Legions of .223 fans out there will nod their heads in knowing agreement. But is it miraculous because of its versatility for use on big and small game, for plinking and teaching new shooters, for varmints and personal protection? Or is it because it is supremely accurate and easy to shoot and, as such, is a standout in many competitive shooting sports? Perhaps “miraculous” is apt because of the .223’s prevalence. It is, after all, our most popular commercial centerfire rifle cartridge by a wide margin.

These are all valid points, but they don’t get to the heart of the matter. What makes the .223 Remington miraculous is that it survived the tumultuous period of its gestation prior to its official birth in 1964, when Remington officially unveiled it as a commercial cartridge, as well as the controversies and travails that surrounded it in the years after the war in Vietnam.

The cartridge was originally developed in 1957 by Eugene Stoner, who was working at Armalite, and Remington. It was one of the many rounds that the military was considering during its tests of small-caliber, high-velocity (SCHV) ammunition. It started as the .222 Remington Special but was renamed the .223 Rem. in 1959 to differentiate it from the many “triple deuce” .222 cartridges at the time.

In time-honored military fashion, the .223 Rem. ascended to the top of the ranks through a combination of luck, cronyism, blackmail, arm-twisting, cover-ups, and even a bit on its merits.

Its partner in crime was the Armalite AR-15/M16, and they were backed by, among others, Air Force General Curtis LeMay, who was bosom buddies with the president of the company that owned Armalite; President Kennedy’s Secretary of Defense Robert McNamara; and General William C. Westmoreland, the Army commander in Vietnam.

The full story of how this rifle and cartridge rose to prominence would take an entire book, but in 1962, the Air Force made a substantial purchase that put the M16/.223 Rem. on the map. The real turning point, however, was in 1965, when Gen. Westmoreland urged its widespread adoption based on a rosy reading of battlefield reports and a threat by Colt, which had been producing the M16 (aka the XM16E1) for several years, to suspend production.

Snags and Glitches
Obstacles to the .223’s success included changes in bullet designs and the powders used to load the round, and poorly made rifles that lacked chrome-lined chambers and barrels, all of which played havoc with the .223’s performance and led to catastrophic malfunctions and American casualties in combat.

Just trying to keep track of the number of twist rates that were recommended over the years is enough to make your head spin. The first spec for a 1-in-14-inch twist was too slow for the 55-grain bullets that were initially loaded, and as various bullets were tried and rejected, the twist rate jumped all over the place, leading to much debate among shooters even today.

Challenges aside, the .223 Rem. has thrived. The success of any cartridge adopted by the military is pretty much assured, but the .223 has proven to be a survivor of the top order. Its battlefield shortcomings–insufficient killing power being the main complaint–have been mitigated through the use of heavier and more aerodynamic bullets.

Sportsmen also have benefited hugely from numerous variants of the .223 that have been created over the years. All the virtues of the round I’ve already mentioned were made possible because of ceaseless tinkering and experimentation. There is no better varmint round in existence, and while it is on the light side for deer-size game, with the right bullet–Barnes Triple Shock, Nosler Partition, Hornady GMX, Federal Fusion–it works well. For personal protection, it is nearly perfect. The right bullets (55-grain polymer-tipped ones, in particular) will stop an attacker yet won’t over-penetrate, decreasing the risk of hitting an unintended target. Even for long-range work–at least with light or consistent winds–you can stretch the cartridge to 800 yards and beyond. And the fact that it is still economical to shoot and easy to reload is just icing on the cake.

It might have taken close to 50 years to work out all the kinks, but it is fair to say that the .223 Rem., America’s miraculous cartridge, is finally perfect.