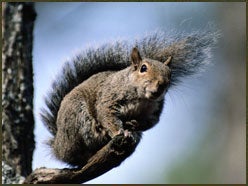 When I was a kid, I practically wore out my semi-auto Marlin .22 squirrel hunting. I spent long days roaming the oak and hickory woods, and usually ended up with a limit of fox and gray squirrels. Each quarry was an adventure, requiring every sense I had to make a clean hit.

That’s why I believe squirrel hunting is the very best way to teach a beginner how to hunt. To be successful, you must be able to listen to animals as they scurry about in the treetops and fallen leaves. Even more difficult, you have to listen to hear the bits of cracked shells falling to the forest floor as the squirrels husk nuts and acorns. That teaches patience.

Once you’ve spotted squirrels in a tree, it becomes a game of patience and keen observation to locate them. It then usually takes a very good shot to hit a bushytail in the head at a distance of up to 75 feet or more, so all the elements of hunting come into play.

Cottontail Kings
Cottontail rabbits, which are more popular than squirrels in many areas, also offer great training for novice outdoorsmen. My first experiences with cottontails were with my dad, grandfather, uncles and cousins. We chased bunnies with beagle hounds, and I learned about hitting moving targets, seeing the quarry move through heavy brush and patiently waiting for it to offer a safe shot. Like squirrels, rabbits taught me things about hunting I could never learn from a book. That’s the good news. The bad news is that nowadays there are far fewer people hunting rabbits and squirrels. Some hunters might welcome that information, because it means less competition in the woods, but I see it differently. Less interest in small game means fewer opportunities to expose young people to hunting. If adults aren’t enthusiastic about hunting rabbits and squirrels, they’ll be less inclined to pass the hunting tradition along to youngsters. In many states, the minimum hunting age is 12 or 14. At that age, some young people are reluctant to tackle deer as their initial quarry but are comfortable starting out with small game.

Fun in Decline?
Why the drop in hunting interest for small game? There are a few theories, including lack of access and fewer young people taking up hunting, but some wildlife personnel believe it’s tied to the abundance of deer and turkeys. Alan Ricks of the Tennessee Wildlife Resources Agency says there were far fewer deer and turkeys 30 years ago. In those days, small game attracted more hunters because there wasn’t much of anything else to hunt. According to a strategic plan done by that state, squirrels were once the most popular game species in Tennessee. In the late 1950s and early ’60s, there were about a quarter-million squirrel hunters. Because of the increase in big-game hunting opportunities and growing urbanization in Tennessee, squirrel hunter numbers dropped to about 165,000 in the late 1960s. That number has shown a steady decline over the last three decades, along with a drop in number of annual trips per hunter.

Preserving Our Future
The same plan states that since overall hunter numbers are declining nationwide, it can be expected that interest and participation in squirrel hunting will continue to drop unless steps are taken to reverse the current trends. Furthermore, unlike many small-game resources, squirrels have adapted well to land-use changes and high populations exist throughout the state. This same scenario exists in most other states. Practically everyone I’ve talked to about the reduced interest in rabbit and squirrel hunting agrees that the situation is very bleak. Small-game hunting is a vital link between adolescents who haven’t learned to hunt and youngsters who are eager to learn about basic hunting techniques and woods skills. If that link disappears, so does the opportunity to become initiated into hunting. That’s a shame.