Beagles, Religion, and Rabbit Hunting in the Pennsylvania Hills

Pennsylvania Pastor Robert Ford finds his calling amid his flock and a pack of beagles. 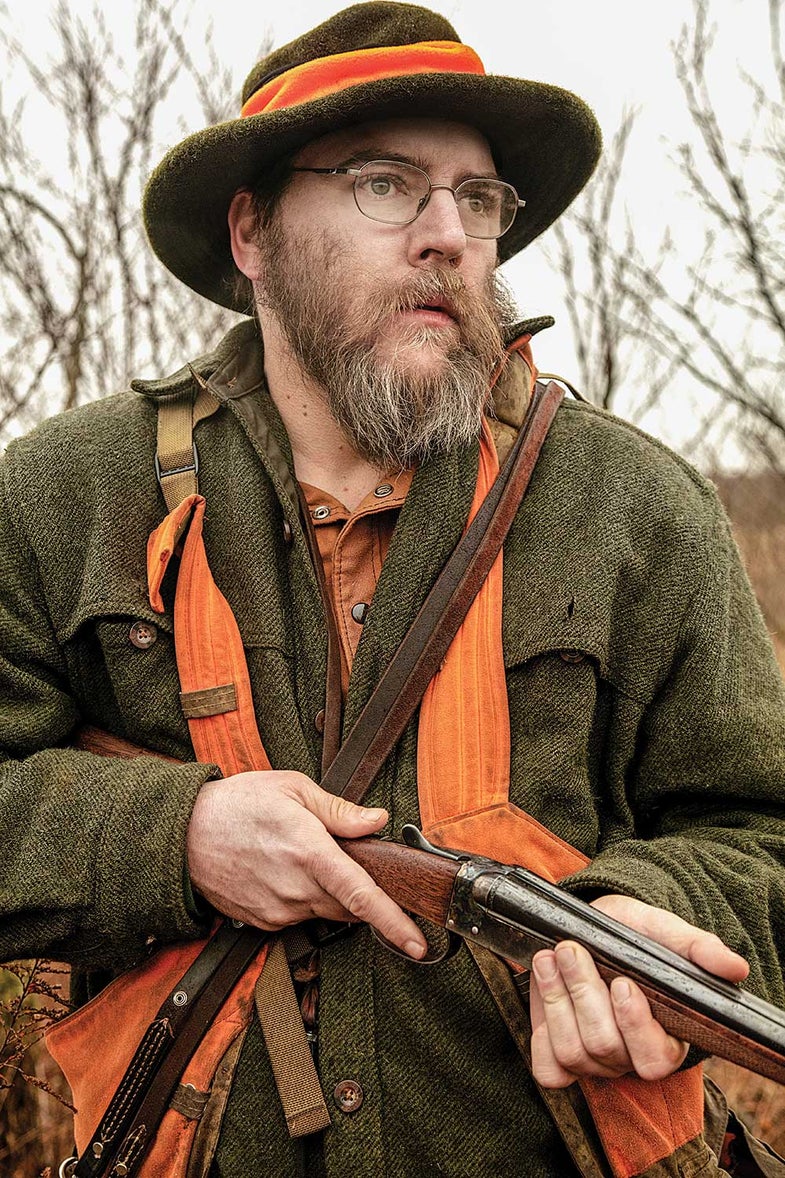 As I slide Pastor Bob Ford a fresh PBR, I notice that his hands look like he’d just wrestled a meat grinder. The day before, Ford had shredded his hands on cactus and barbwire while chasing mountain cottontails. “I hope they heal by Sunday,” Ford says. “My parishioners don’t like taking communion from bloody hands.” Methodist pastor Bob Ford, nicknamed the Beagle Bard for his fondness for writing about the hounds, is from State College, Pennsylvania. He’s hard to miss even among the grizzled journalists at the writer’s event where I met him in Montana. With a stature reminiscent of his days as a tight-end playing college football and a beard suggestive of ZZ Top, Ford’s passion is rabbit hunting. I’d first heard of mountain cottontails only a few days earlier. I’d never known that the species even existed. Turns out, it’s a little lighter in coloration than the Eastern cottontail and lives in the Intermountain West. Ford was very familiar with these rabbits—and he was determined to ship one back home. I had bumped into him in the hotel lobby while he was looking for a cooler to do just that. “I shot [a mountain cottontail] yesterday afternoon,” Ford told me. “About three hours from here, I saw a good-looking ranch and knocked on a rancher’s door to ask to hunt. ‘Lord have mercy,’ the rancher said. ‘An answer to my prayers. I’ve lost so many damn cattle to broken legs that I don’t care how many you shoot. Kill ’em all, and let God sort ’em out.’ I don’t think he knew just how ironic that statement was. “My dog Duke chased four, I killed one, so I’m sending it back to State College via FedEx.” Atop Ford’s bucket list of hunting achievements is what many hunters and anglers might think eccentric: harvesting one of every rabbit and hare species in North America. He was missing the mountain cottontail. That’s why he and his wife, Renee, had packed the Beagle Mobile—a 2010 Toyota Tacoma with nearly 200,000 miles on the odometer—and headed west.

Although Ford is a rabbit hunter, a field trialer, and a writer, above all, he’s a country pastor. If you can’t get in touch with him during the week, he might be visiting an ailing parishioner in the hospital or a nursing home. Or he might be delivering food and books to a shut-in. Summertime is for vacation Bible school. And in between, his duties include baptisms, weddings, and funerals. Ford serves two churches, which makes him a busy pastor.

The spirit moved him when he was 14 years old. As he recalls, it was a year after he bought his first beagle, with money earned from delivering the local newspaper, the Erie Sunday Times. Amid the solitude and the baying of his dog, he somehow knew he’d be a pastor. Today, he continues to find inspiration in running dogs and being in the outdoors—that time gives him an opportunity to think, and he crafts his sermons in the woods.

“Being in nature and hearing the music of the hounds helps me be a better preacher,” says Ford. “It’s always been that way. When I’m doing that, I get to a thoughtful and tranquil state of mind. I can focus and think. I feel God’s grace, and I write my sermons way more easily than if I sit down at a desk. I think of passages, parables, and messages while I’m hunting. The rest comes from there.”

The Pennsylvania rabbit season is a robust six months long, but that only provides material for half a year’s sermons. So Ford runs his dogs in beagle clubs and field trials during the off-season. It helps him gather material for his sermons, but it also keeps his dogs in shape and focused on rabbits.

“Although I’ve won ribbons, my goal isn’t to have a pack of field-trial champions,” he says. “It’s to keep my dogs focused and fit for the hunting season.”

And while Ford enjoys a variety of hunting and fishing pursuits, beagles and rabbits are his real passion, and it’s how he got started in the outdoors.

“My dad was a rabbit hunter,” he says. “There were a lot of abandoned farms in the ’50s and ’60s, and young forests held a lot of game. The beagle was the all-­purpose dog, and we used them not just for rabbits, but also for birds and squirrels. We always had at least a few dogs.”

When Ford’s dad finished a day at the mill, they would hunt rabbits together, and they hunted just about every day of the season. Then they would run dogs in trials the rest of the year.

If success is measured in bagged rabbits and not by field-trial ribbons, then a look into Ford’s freezer provides a glimpse into his hunting know-how—last season he shot 156 rabbits.

“Our freezer is so full of backstraps and legs that it can’t even hold a half gallon of ice cream. That’s a problem because my wife likes ice cream as much as I like rabbit.”

The phone rings and Ford steps away. It’s a friend who has a hot tip about a place he says is filthy with bunnies. The pastor makes a mental note, and I can see he’s trying to figure out how to get there. The 200,000 miles on his truck means Ford travels a lot to hunt. He’s hit rabbit honey holes all over the country but especially in the Northeast—Upstate New York along the Canada border, Maine and New Hampshire after the deer hunters have all gone home, Cape Cod in November, and Nantucket in January.

He is self-sufficient and cares more about rabbits than he does his sleeping quarters. If there’s a good rabbit population not far from a Methodist church, he might crash on a cot. If not, he’ll pop his Maggiolina truck rooftop tent, with its built-in mattress, and climb into a sleeping bag. If it’s cold, he’ll pull a few dogs from the boxes to keep himself warm. He logs around 25,000 miles a year chasing his dream.

I get to see Ford’s mountain cottontail mount a few months later when I catch up with him for a rabbit hunt in Pennsylvania. The mountain cottontail is displayed prominently in his study, which is home to so many mounts of hare and cottontail species that it looks like a rabbit museum. That night for dinner, we have rabbit fajitas.

The next morning, photographer Natty Welch and I meet Ford and and his friend Jason Wiseman at the Sheetz gas station across the road from the Shiloh Lutheran church. We had a bit of a drive to hunt a spot generously provided by one of Ford’s parishioners. 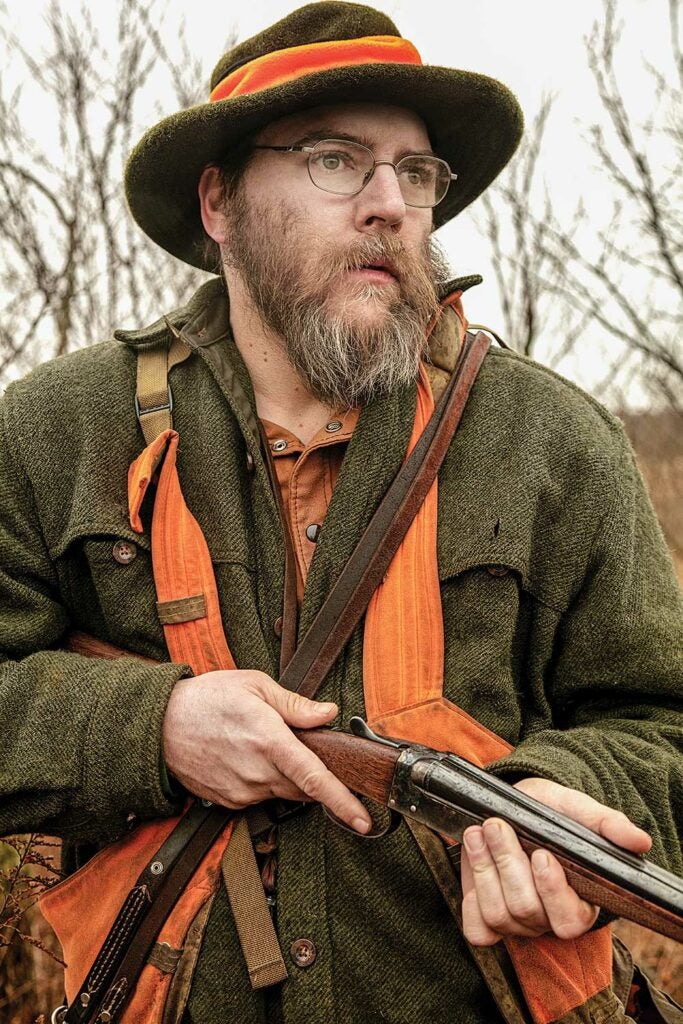 Pastor Ford waits for a rabbit.

One of the benefits of serving rural churches is that his parishioners often offer Ford hunting access.

“This spot that we’re going to hunt is owned by one church member,” Ford says on the drive over. “Heck, I probably hunt a dozen spots owned by members of my churches. It’s fun.”

It was cold and gray, typical of central Pennsylvania in February. We drive to the end of a dirt road and stop at an old strip mine that dropped down into a valley. To our left was an old dairy farm, and the hardwoods were interspersed with a bumper crop of young multiflora rose. Cottontail country.

Not surprisingly for a Methodist preacher, Ford is a traditionalist, made all the more apparent when he pulled a classic American side-by-side from its leather leg o’mutton case last winter.

“I like the barrel configuration on side-by-sides the best,” he said. “The double plane keeps me focused on the running rabbits. I picked up a Lefever, a Fox, and an Ithaca for really short money. While I’ll use a 16-gauge in the early-season understory, I drop down to smaller gauges for much of the season. Most of the time I’ll shoot either a 28 or a .410. I actually prefer the .410 because I like iron in my diet, not lead.”

Ford and Wiseman collared six dogs and cut them loose. Five minutes hadn’t passed before the baying began. Rabbits run in circles, and before too long, we saw one dodge out from the pines and broomstraw and pause to listen for the dogs before running again. We were in no hurry—the two packs would do their job, and eventually we’d get our shots.

About an hour later, the cottontails picked the wrong spot to stop. Wiseman popped one with his 28-gauge and Ford dropped another with his .410. Opportunity knocks, and blessed are those who wait.

Ford’s pack ran up to the dead rabbit and sniffed it over. Duke started growling, making it known to the pack that this was his rabbit on the ground. Then he picked it up and retrieved it to Ford’s outstretched hand.

“That’s not very common in the beagle world,” Ford says as he takes the dead cottontail from his dog. “Duke’s daughter, Diamond, the bitch from the litter last year, is showing signs of retrieving rabbits to hand too. Badger, on the other hand, won’t pick up a rabbit, and if he has one for too long, he’ll eat the head. If I don’t keep an eye on him, he’ll eat the entire rabbit.”

With his six dogs and decades of experience, Ford’s knowledge of beagling is held in high regard, so I pepper him with questions after our hunt is over.

“No doubt the question I’m asked most frequently is what to look for in a beagle,” he says. “The best way to judge beagles is to watch them running rabbits. When you see what you like, buy from that bloodline. I like a long chase that ends in a dead rabbit, so I like dogs that have good noses and the genes to circle to the gun. I like dogs that can keep a rabbit going, and that means turning them so they don’t go in a hole. Circling gives me close, safe shots, which I can make—preferably in the head. I don’t like to waste meat.

“Other hunters like to jump-shoot their rabbits, so they want a different type of dog. They want dogs that circle close so they can get a shot just following the chase.

“Look for a dog that exhibits the qualities you like and you’ll be happy.”

How the hunter works the cover is also important to Ford.

“Statues shoot rabbits,” he says. “When you’re in an area full of bunnies, remain stationary. Don’t move and don’t talk. Wait until the rabbit comes out of the brush and pauses in an opening. You’ll get a clean kill shot. Hunters who move or talk spook rabbits back into the brush. You might not think that rabbits are smart, but they are.

“It’s the opposite if you’re jump-shooting rabbits. Movement is important to keep up on the dogs and to be in position for a shot. Running rabbits call for tighter chokes and larger gauges.”

Like with any good gun-dog hunt, it’s important to be able to read the beagles. Watch how the pack’s circles tighten or relax, Ford says. Those are clues about where you should move to in order to get an open shot.

Ford’s final advice? Remember to wear your gloves to keep from getting your hands shredded. “If I’m hunting especially thick stuff, I wear gloves to try and keep my hands clean. After all, I’m a pastor first and a rabbit hunter second. Divine Right Order, ya know?”