Every whitetail fanatic has dreamed of coming face-to-face with a buck packing more than 190-inches of antler during archery season.... 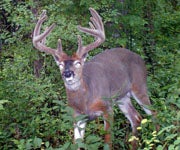 Every whitetail fanatic has dreamed of coming face-to-face with a buck packing more than 190-inches of antler during archery season. Unfortunately taking a buck that size will remain a dream to most hunters, but Ryan Cox is one of the lucky few who made that dream a reality.

He connected with a whitetail that would green score 191 5/8. Here’s how Cox closed the deal on this whitetail trophy.
Cox’s started hunting the buck a couple years ago after he captured photos of it on his trail camera. The majority of these pictures were taken at night and the buck always seemed to stay out of sight during the daylight hours. Then the buck disappeared at the end of last season, causing Cox to set his sights on another high-racked whitetail that had been frequenting the area. He strategically switched stand locations and decided to set up along the edge of some thick cover for an evening hunt.

Cox climbed up the tree and started to range and mentally mark the yardage from his stand when a whitetail with a large rack and body suddenly stepped into view. The buck cautiously walked directly towards him, and as the buck closed the distance, Cox realized it was definitely a shooter. He began to focus his attention away from the long tines and massive antlers. Within seconds, the whitetail was standing almost directly beneath his stand. Cox quickly came to full draw and placed an arrow right between the buck’s shoulder blades. The shot pinned the deer to the ground.

A quick follow-up shot ended Cox’s hunt for the nocturnal giant that had seemingly vanished without a trace. The buck is a main frame 12-pointer with at least three kickers and a whole lot of mass. I guarantee Cox is thankful right now that the smaller 8-pointer never offered him a good opportunity! Congratulations Ryan Cox on a phenomenal buck!