There has been quite some buzz around Easton’s new Injexion arrows, which boast the smallest diameter of any hunting arrow... 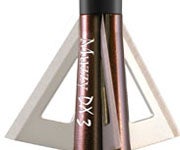 There has been quite some buzz around Easton’s new Injexion arrows, which boast the smallest diameter of any hunting arrow on the market (just .236 compared to .294 diameter for a standard carbon arrow). The smaller diameter, however, meant standard components could not be used, so the Deep Six System was developed.

I had a chance to stop by the Muzzy booth at the ATA Trade Show and get my hands on the DX-3. Speaking with the guys in the booth, I learned just how painstaking of a process developing the new DX-3 was – moving 1/10 of a grain from one end of the broadhead to another while still maintaining the 100 grain final weight is no easy feat.

The DX-3 is in essence a modified MX-3 with a slightly thicker ferrule and a tapered end to meet the shaft diameter for less friction and drag during flight. The same .025-inch blades found on the MX-3 are used on the new DX-3, which also has a cutting diameter of 1-1/4 inches.

The Muzzy DX-3, coupled with the Easton Deep Six System, produces less wind drag than other larger broadhead-arrow combinations, resulting in increased accuracy and deeper penetration. When the same amount of energy is concentrated in the smaller Deep Six/DX-3 package, the result is devastating. The DX-3 also fits Easton’s Axis and Full Metal Jacket with Deep Six inserts. The Muzzy DX-3 has an MSRP of $29.95.

I’m really looking forward to shooting the new DX-3 and seeing what the actual increase in penetration is when compared to a MX-3 on a standard shaft. If it performs anything like Muzzy’s MX-series broadheads the deer are in trouble!