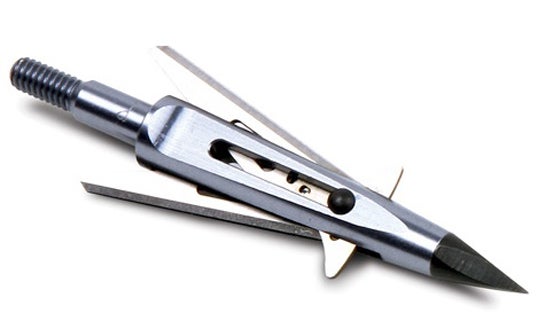 New Archery Products (NAP) recently announced a new 2-blade rear-deploying broadhead called the Killzone. The archery industry has seen a growth in demand for 2-blade mechanical broadheads as the reliability and design of these broadheads continue to improve.

The Killzone has a 2-inch cutting diameter and incorporates new technology which allows both blades to open and work together in unison. This design allows the broadhead to gain maximum penetration while avoiding any single blade deployment or deflection upon impact or during penetration of the cavity.

NAP increased the reliability of the Killzone by eliminating the need for o-rings or rubber bands to hold the blades in place. The new blade containment system also prevents the blades from opening while in your quiver or even worse, prematurely in flight.

One concern with mechanical broadheads has always centered around penetration and blade deployment sucking up too much of the arrow’s energy. The 2-blade rear-deploying design is the least restrictive when it comes to penetration.

There is a direct relationship between the number of cutting surfaces and the amount of energy it takes to push those cutting surfaces through an animal. Two blades require the less energy than three. Combine this with rear-deploying blades instead of blades that swing open from front to back and you have a broadhead that should go deep.

The new Killzone broadhead blades are strategically placed further back from the tip, allowing both blades to fully deploy and anchor against the back of the ferrule creating an extreme entrance and exit hole.

The blades feature NAP’s Diamized blade technology which NAP claims makes for one of the sharpest blades in the industry. What I really like about the Killzone broadhead is that the blades fold back, so it is not a barbed broadhead and is legal in most states (states like New York ban the use of “barbed” broadheads).

The Killzone is available in three models: 100 grain Cut-On-Contact tip, Trophy Tip or Deep Six. The Killzone is sold in a 3-pack of broadheads and includes a practice head.

The Killzone has a MSRP of $39.99. A 3-pack of replaceable blades and tips will be available. The blades are easily replaced and the pack comes with, replacement screws and a wrench.