For the price of a couple of boxes of rifle shells, weekend coyote hunters can buy a functional electronic predator call containing basic sound clips and adequate features 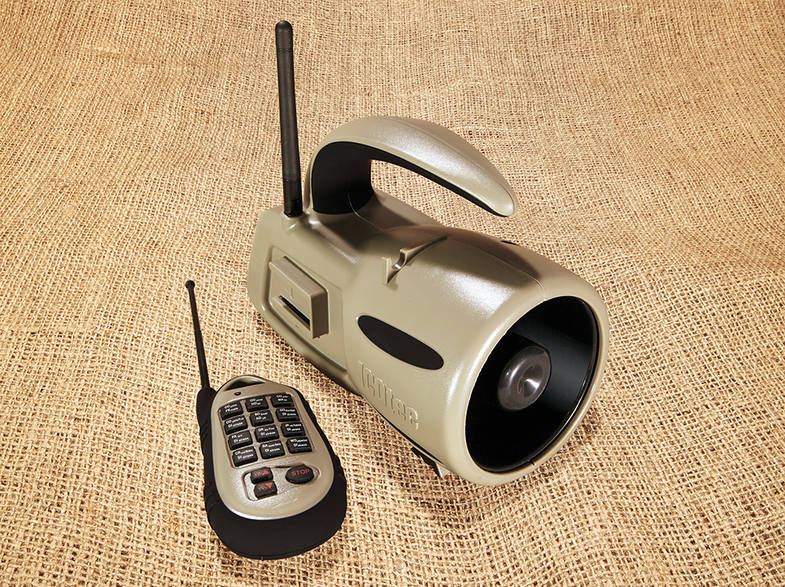 I own a $500 electronic predator call. It’s a perfect blend of portable form and solid-state function: electronics sealed in a winterized case, hundreds of high-definition wildlife shrieks and bawls amplified by a weatherproof speaker. If it has a problem, it’s that it sits silent on a shelf for about 51 weeks of the year.

Between various distractions, I don’t find as much time as I would like to hunt coyotes. It’s a shame I don’t get more use out of such an expensive, purpose-built piece of gear. It’s for occasional predator hunters like me that the game-call industry is marketing entry-level electronic calls with a handful of digital sound clips for a fraction of the price of the higher-end units. Are these weekend-warrior e-callers up to snuff? I tested half a dozen new units on the frozen prairie of eastern Montana to find out.

The first thing I noticed about these calls is their simplicity. Many feature stripped-down remote controls, and frankly that’s a relief given that some of the higher-end callers require advanced degrees in electronics to operate. But the simplicity has a shortcoming: You get only a handful of basic sound clips with these units, all of which retail for under $100 (some far below that price), and the volume and on/off functions don’t always work smoothly. Just as you’ve probably experienced with other budget-priced electronics, controls tend to be flimsy, some features work intermittently, housings are prone to break or crack, and these units may not survive many seasons of hard use.

Still, for about as much money as it takes to fill your gas tank, these are pretty good tools for the occasional coyote caller. And you won’t feel guilty if you bench these devices while you pursue other activities. 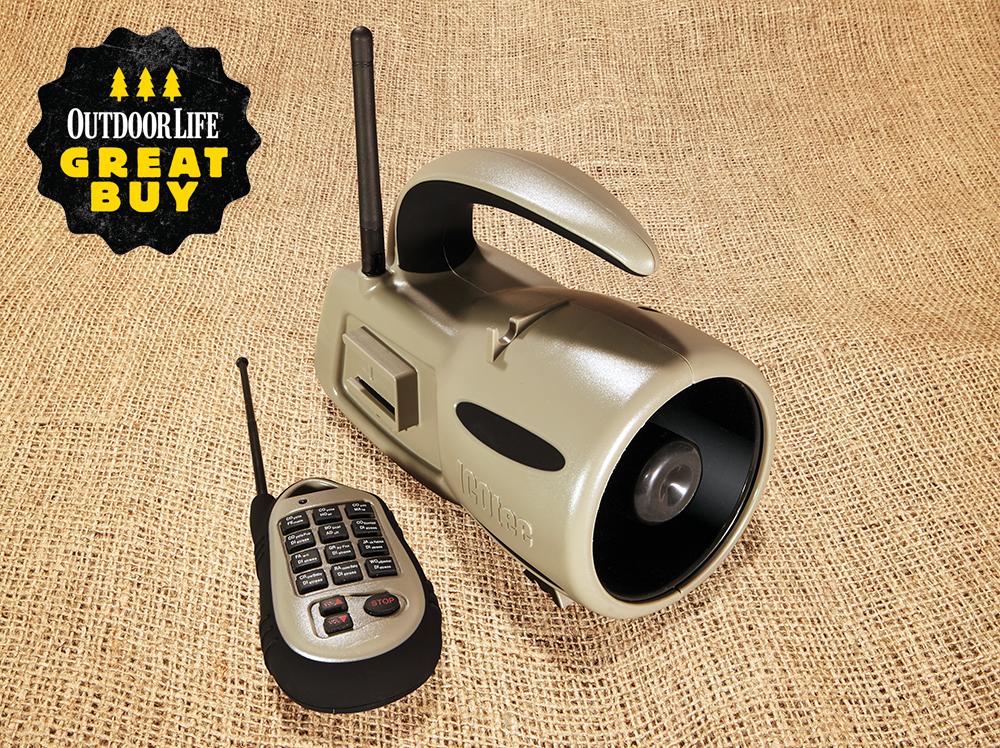 ▶ ICOTec is one of the unknown giants of the e-caller world, supplying many of the calls that are rebranded by other manufacturers. The GC300 has the look of many higher-end units, with the same easy-carrying flashlight configuration that the Primos has, and it features one of the most powerful remote controls in the field. The base has a port for an external speaker.

Call Selection: Twelve clips, including four coyote vocalizations, bobcat, fox, raccoon, crow, and woodpecker. Only two are rabbit, and one is a fawn in distress.

Hits: The reach of the remote is impressive, and you don’t have to keep it in direct line of sight of the base unit to operate the caller. I love its ability to play two sounds simultaneously. The remote is easy to operate with gloved fingers, and the button layout is easy to read and understand. The unit is extremely packable and portable, and it contains good-sounding clips provided by Wildlife Technologies. Its one-year warranty is rare in this category.

Misses: I’d rather see more common prey animals in the sound library; for instance, a rodent squeak would be a good addition. The base unit’s finish is too shiny and it needs legs to allow it to stand on uneven surfaces. The remote’s battery is the low-power, hard-to-find A23; the common AAA would be better. 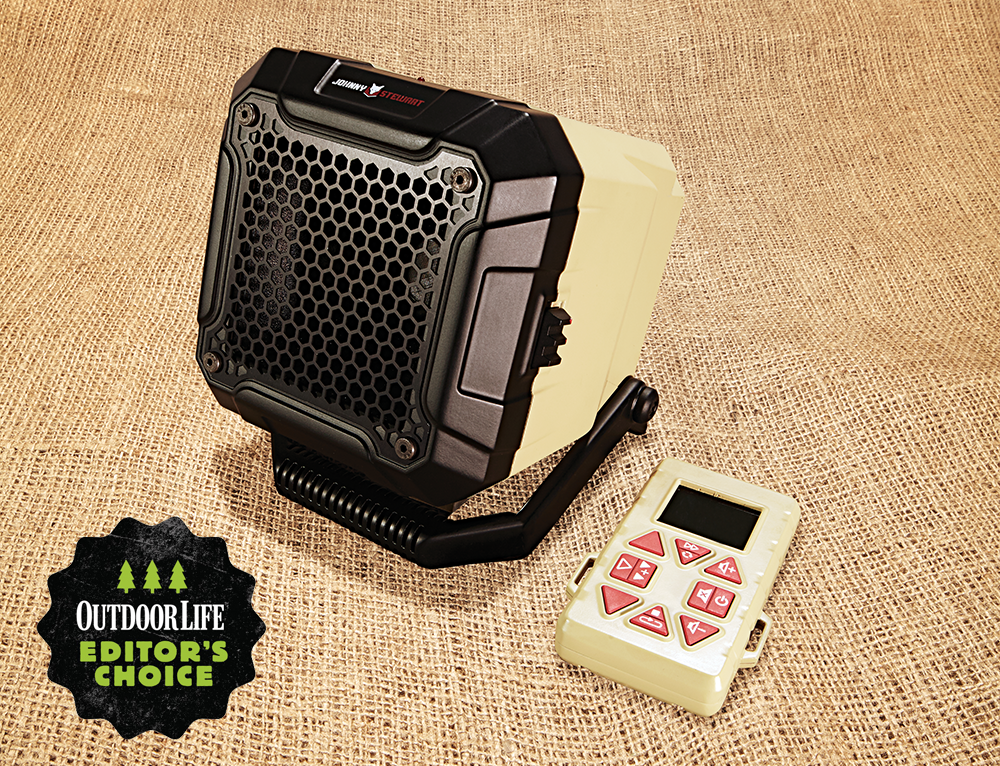 ▶ The more impressive of the two Johnny Stewart units in the test, this hefty caller (a prototype) gives users the ability to import hundreds of additional sounds through a USB port, storing the clips on a 256 MB internal memory card. The huge speaker takes up most of the dimensions of the blocky base unit. The backlit LED remote is easy to use with gloved fingers, and the remote nests in the base unit by means of a magnet.

Call Selection: Ten sounds, including red-meat basics such as jackrabbit buffet, grown cottontail, and coyote pup in distress. The others are useful for general searching sounds, though they may get you in trouble with PETA: chicken distress, tortured kitten, and canine puppies.

Hits: Huge reach, thanks to its powerful transmitter. The 110-decibel speaker cut across the prairie. The ability to add an external speaker and additional calls are both big pluses, and rarities at this price point.

Misses: The power switch on my sample was so loose that it inadvertently turned on in my backpack and depleted the batteries. 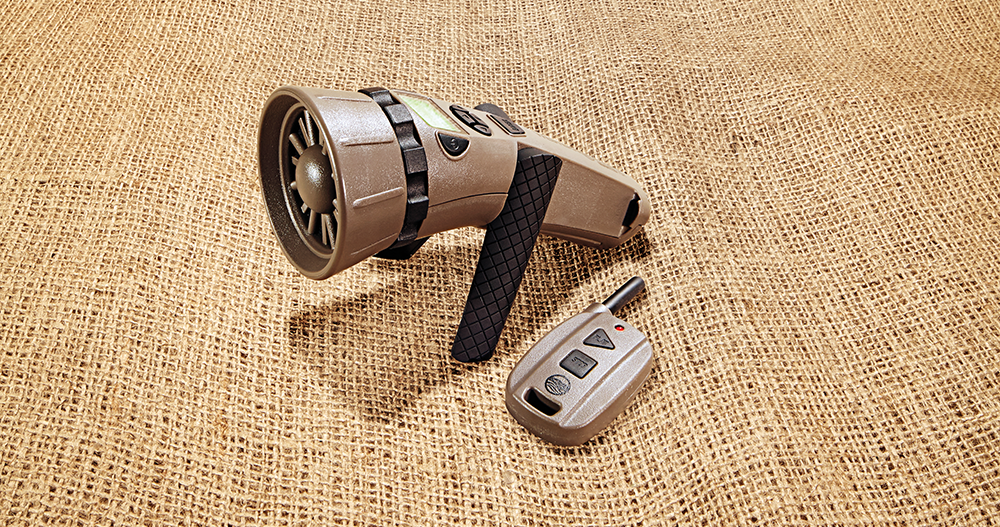 ▶ Easily the most portable of the units tested, this petite game caller is about the size of a telephone handset and features an impressive 75 sound clips from animals as diverse as moose and field mice. The tiny remote—about the size of a car-key fob—has an impressive reach. And while the internal speaker is small, the Mantis has a port to accept an external speaker. A trigger on the unit allows you to fire the speaker without using the remote.

Call Selection: This is more of a game caller rather than strictly a predator caller, with 13 categories of sounds, including clips that cater to turkey, waterfowl, deer, elk, and even hog hunters. Predator sounds include seven coyote vocalizations, four rabbits, six rodents, and two fawn distress calls.

Hits: When you carry this, you have Dr. Doolittle in your pocket, with the ability to mimic the vocalizations of dozens of species. The unit easily slips into a pack or even a jacket pocket. Pivoting legs allow it to stand freely on a variety of surfaces. It has a solid-state feel and intuitive controls.

Misses: The tiny speaker limits the range of the unit. And because the receiver is in the rear of the base unit, it must be pointed toward the user in order to maximize the operating distance. The simple remote has only “play” and “stop” buttons. It’s cool to have so many sounds, but most states prohibit electronic calling for game animals. 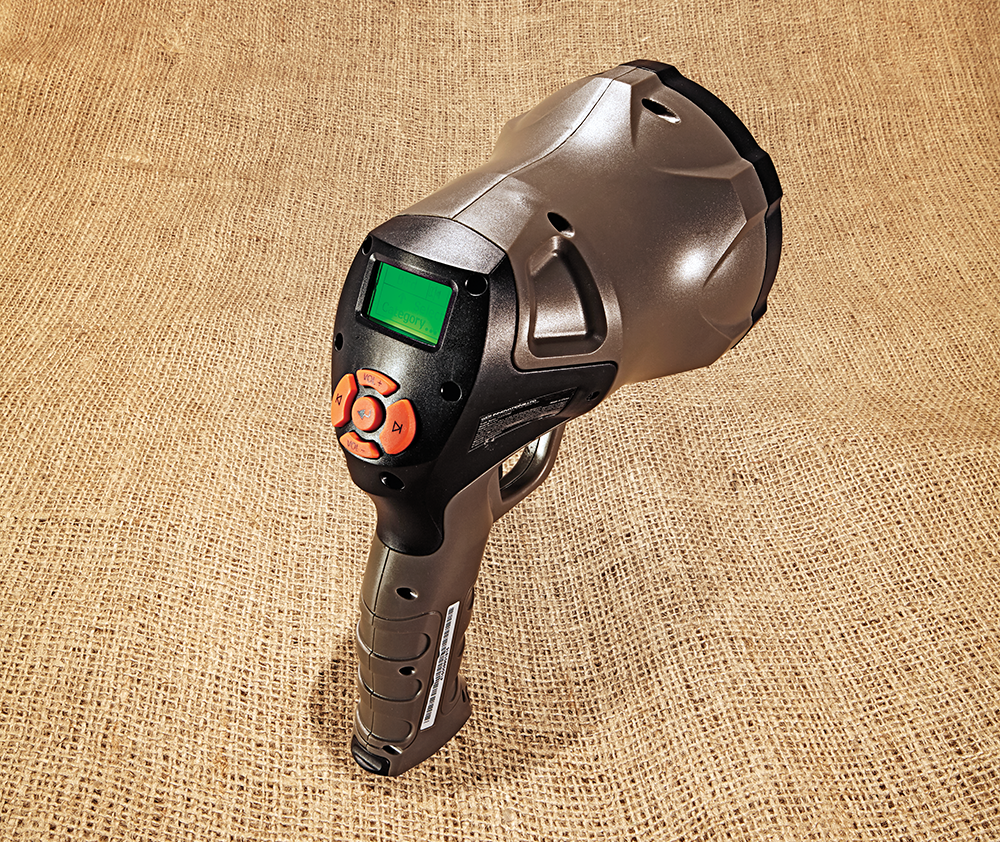 ▶ This is the only call in our test that doesn’t have a remote control. Instead, a trigger on the grip fires the impressive variety of sounds. Because there’s no transmitter or receiver to complicate operation, most of the unit’s dimensions are taken up with a large and loud speaker. Like the Western Rivers unit, the Flextone is more of a game caller than a predator caller. It includes 50 sounds in all, ranging from rabbit and raccoon to deer, turkey, squirrel, hog, mouse, and owl.

Operating Range: Because there’s no remote, I was unable to assess this category.

Hits: Easily the loudest of the callers in this group, the Flextone is able to reach across an impressive distance. The unit is easy to point and shoot to broadcast sound, like a directional speaker. The controls are small, but the backlit LED display is easy to see, even in low light.

Misses: The lack of a remote restricts the utility of this caller. The unit’s finish is a little too shiny. While its range of calls is impressive, most states prohibit the use of electronic calling for game animals. I’d like to see more prey-in-distress sound clips. 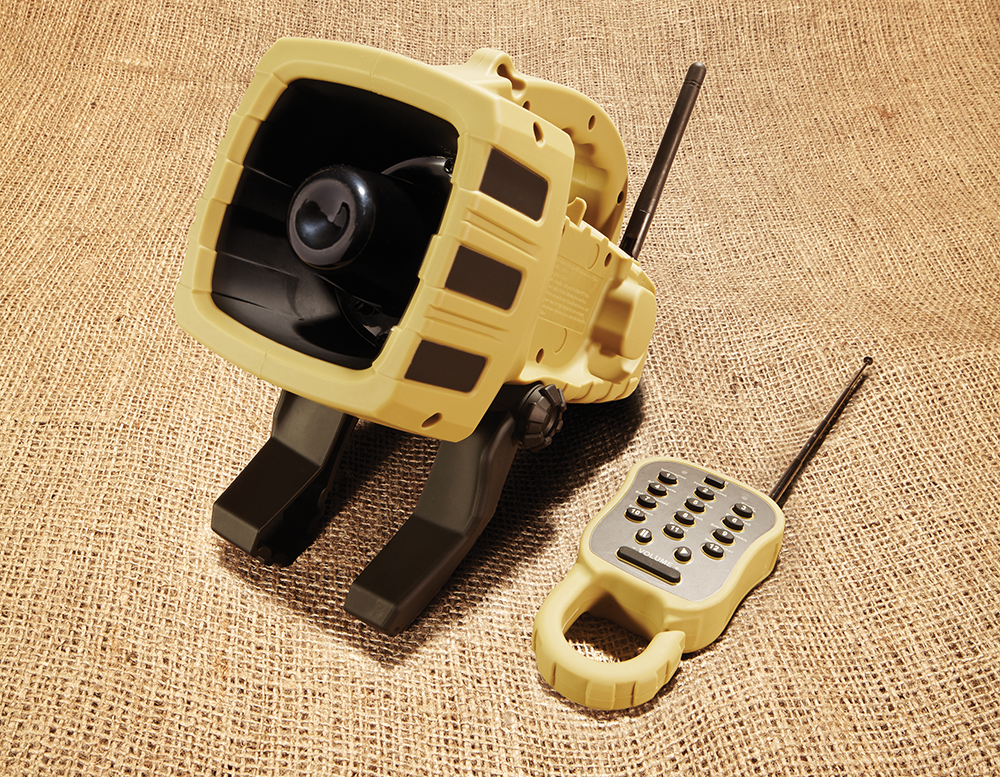 ▶ Like many higher-end callers, this 12-sound unit resembles an old 6-volt flashlight, with the speaker located where the flashlight bulb would be. The configuration is easy to carry, and retractable legs allow the Dogg Catcher to stand on its own, or you can hang it from a branch or fence wire by its handle. The hand-filling remote control mates to the base unit with a magnet, ensuring that it won’t get lost when you’re not using it.

Hits: Sound clips are from Randy Anderson, a Primos pro staffer with an extensive collection of predator and prey vocalizations. The coyote clips sounded great; the rabbit calls were a bit muffled. The unit’s tacky exterior is easy to handle with gloved hands, and its dull finish won’t spook sharp-eyed coyotes. The ability to make two sounds simultaneously is a feature generally found only on higher-end e-callers.

Misses: The operating range was far less than advertised. The remote-control buttons tended to stick in cold weather, and the remote battery (a hard-to-find 12-volt A23 cell that was not included in the package) would be better if it were a common AAA.

▶ Hunter Specialties is in the process of reinventing the iconic game-calling brand Johnny Stewart, and this small entry-level predator caller is one of the first products in the rejuvenated line. Because production units weren’t available in time for our test, we evaluated a prototype. Unfortunately, the function of this bare-bones model is more limited than other callers in this field.

Hits: With the approximate dimensions of a Big Mac box, this unit is highly portable. The remote nests in the base unit by means of a magnet. The retractable handle is useful for hanging it from a tree or fence post. The sound output is remarkable for such a petite speaker.

Misses: The remote simply didn’t work beyond 20 yards. The five-sound library is pretty limiting, and because the volume control is on the base unit instead of the remote, it’s impossible to adjust the volume from a distance.

HOW WE TEST
I solicited manufacturers for new electronic calls configured for predator hunting that retail for $100 or less. I loaded the calls with fresh batteries and took them on a coyote hunt on a 10-degree December day in eastern Montana. I placed the calls about 50 yards from my stand and made a series of calls with each, assessing their functionality and ease of use, and rotating through three main categories of sounds: rabbit-in-distress, fawn-in-distress, and coyote howls.

After loading another round of fresh batteries in the units, I measured the operating range of the remote controls and the effective broadcast range of the rabbit sounds. With assistance from my children and a rangefinder, I measured the maximum distance at which the remotes worked and also the farthest distance from which I could hear the rabbit shrieks.

I operated the units until the batteries drained in order to assess battery life.

TEST RESULTS
Scores are based on extensive field testing in Montana