With a one-year battery life and superior image clarity, Bushnell has pushed the envelope with its 2012 product line, which... 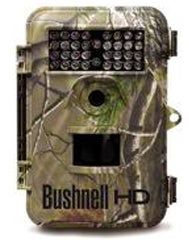 This feature is especially useful to those hunting over food plots or open fields where animals may walk in view of the camera, but out of range of the sensor, which normally wouldn’t trigger the camera. Field Scan technology captures images at preset intervals ranging from one minute to 60 minutes, while simultaneously capturing live trigger images.

As an avid user of the Bushnell Trophy Cam since it’s release, I know it’s weakness has always been with the night vision capabilities. In the past, nighttime pictures were usually dark and only objects directly in front of the camera were well lit. On burst mode the pictures would noticeably get darker with each shot. The problem, however, is that it’s a challenge to fix. Increasing the shutter speed means moving animals will be frozen in time with little to no blur, but less light will enter the camera resulting in darker images. Slowing down the shutter speed means a higher amount of light enters the camera and brightens the entire picture, but this is usually at the expense of sharp nighttime pictures, and any quick or sudden movements are blurred.

In addition to brighter night vision, the Trophy Cam HD features an auto passive infrared (PIR) sensor that automatically adjusts sensitivity levels based on the ambient temperature. Users also have the option to pre-program the PIR sensor by selecting a low, medium or high sensitivity setting.

The Trophy Cam HD also features multi flash mode with three programmable flash settings: low, medium or high. With multi flash mode, users can select the ideal flash setting based on the location of the camera and the typical distance of recorded game, which in some instances can help eliminate image washout and conserve battery life.

For hunters running multiple trail cams they’re really going to like Bushnell’s new geotag feature which allows users to set the camera to auto-embed the GPS coordinates of the camera to each image or video captured. Additionally, the info stamp has been upgraded to include date, time, temperature, Moon phase and a user-selected name.

To top things off, the Trophy Cam HD can accept up to 32 GB SD cards with a capacity that can store more than 20,000 images! This is extremely important when hunting mature bucks because you want to visit your camera as infrequently as possible. The more often you check your camera, the more human scent you leave behind and the deer quickly get educated. Another cool option with the new Trophy Cam HD is the ability to capture images and video in either a widescreen 16:9 or full screen 4:3 format. I personally, prefer the wider view of the 16:9 format and am glad manufacturers are starting to give hunters the option of shooting pictures in this format.

The Bushnell Trophy Cam HD will be available in May 2012 for an estimated retail price of about $229.99.