Jenny McCarthy Gets Her Son a Deer Head for His Birthday

It feels like just yesterday that Jenny McCarthy was hosting “Singled Out” on MTV. Now a mother, McCarthy’s priorities have... 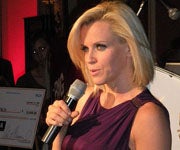 It feels like just yesterday that Jenny McCarthy was hosting “Singled Out” on MTV. Now a mother, McCarthy’s priorities have shifted to her son Evan. When I heard that she recently gave her son a deer head for his 10th birthday, I thought, “Wow, what a cool mom.” Then I heard the rest of the story.

During her recent interview on “LIVE! With Kelly,” McCarthy described a conversation she had with her son after watching “Bambi.” Evan felt sorry for Bambi’s mother after she was killed in the movie and came to the conclusion that hunting is wrong.

It’s scary to wonder how many children base their views on hunting off of a fictional Disney movie. More importantly however, I think it’s up to parents to educate their children on why we hunt and the conservation programs hunters support to ensure that there is wildlife for future generations to come.

When Evan asked his mother, “What is hunting?” they proceeded to surf YouTube to find a clean hunting video. After watching the video, Evan decided to take a stand against hunters – yes, after watching Bambi and then a YouTube video on “hunting,” media perception has mistakenly become reality to this child.

Evan wrote a letter to hunters saying, “Dear hunters, stop doing it, you’re killing somebody’s mom and dad,” which his mother thought was very sweet. The next words out of Evan’s mouth were, “Do you think you can buy me a deer head for my birthday ’cause it’s really cool.”

It’s great to see that Evan was curious enough about hunting to want to learn more. I also have to admit that I appreciate McCarthy’s willingness to try to show her son what hunting is – I just don’t think a random YouTube video was the right way of going about it.

Hunting isn’t for everyone and that’s okay, but it’s important we give children an education about hunting and explain why we hunt and what we do to protect the land and animals we hunt. If we leave it up to “Bambi” and YouTube, the next generation of hunters is sure to be a slim one.