The buck’s antlers had it all – long beams, heavy mass, 23-points and enough of it all to eclipse the... 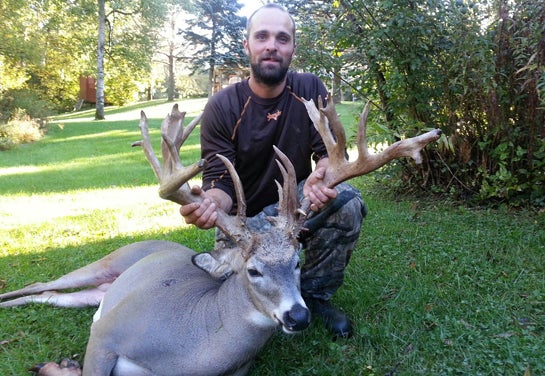 The buck’s antlers had it all – long beams, heavy mass, 23-points and enough of it all to eclipse the buck currently in New York’s #1 spot as an archery non-typical.

On September 27th, opening day of New York’s northern zone archery season, Wayne Long was hunting with a friend of the family’s farm near Watertown. It was there where he crossed paths with a giant non-typical buck that he was able to slip an arrow through and watch as the giant whitetail took its final steps.

I found out about the buck through an email from Wayne’s brother Mike. Mike was at work when he sent the email and hadn’t had a chance to see the buck yet, but he was as excited as anyone would be to hear his brother got the big one. He said the buck had the potential to take the number one spot in the non-typical category and couldn’t wait to get over to his brother’s house that evening to get his hands on the rack.

Excited as anyone would be, I shared the photo on the NYBowhunter facebook page and it quickly took off becoming the most popular post ever to hit the page. Hunters across the state were excited for Long, but shortly after, the skeptics came out. It didn’t take long for a Facebook feud to ensue between those who seemed to know something the rest of us didn’t and Long’s girlfriend who defended her boyfriend.

Matt Cooper, a Lewis County measurer and Vice President of the NYS Big Buck Club, scored the buck. As he put the tape to the antler, he asked Long a few questions about the hunt, but the story he received didn’t seem to add up. Looking at the lower jaw of the buck, typically used to age a whitetail, Cooper estimated the buck to be 2.5 years old – way too young for a wild whitetail to put on this much antler in New York. Cooper was convinced this was a high-fence buck.

The next day Cooper had learned enough about the buck to believe it was farm raised and gave Long two options: remove the record book request or prove publicly that the deer was not farm raised. Long withdrew his request to the record books.

A few days later an article was published in the Watertown Daily Times. The first sentence read, “There will be no spot in the record books for Wayne N. Long II, a Watertown hunter who claimed to have killed a state record buck in Rutland Corners on Thursday.”

On October 3rd, I received an email from Wayne’s brother Mike apologizing for sharing the pictures of his brother’s buck without knowing the real story behind the deer.

It’s sad to watch as someone shoots a high-fence buck and tries to deceive the hunting community into thinking it’s a free-range trophy that can top the record books. Even worse is a man lying to his own brother and putting him in an awkward situation. This is not what deer hunting is about. Trying to deceive the hunting community is simply unacceptable. It’s not something that’s taken lightly and it won’t be forgotten.