Depending on the circumstances, sometimes I bowhunt whitetails from the ground. It’s not necessarily more effective most of the time,... 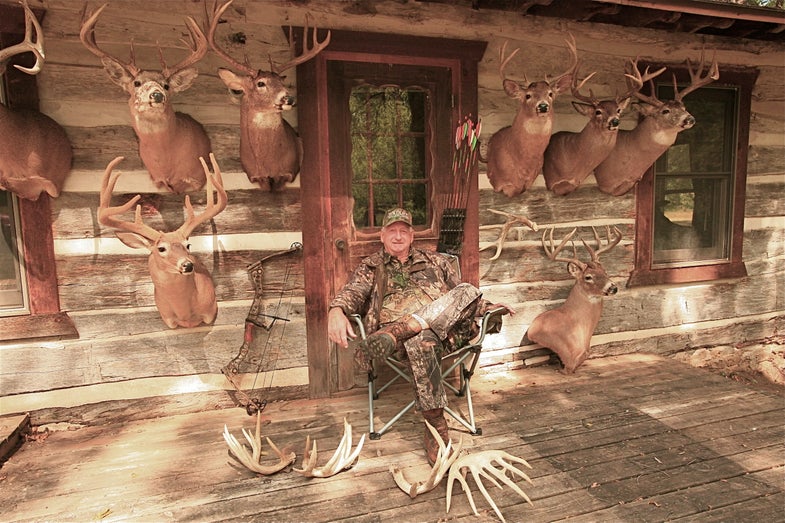 Jim Brush of Galesville, Wis., poses with some of his trophy whitetails taken while bowhunting from the ground..
SHARE 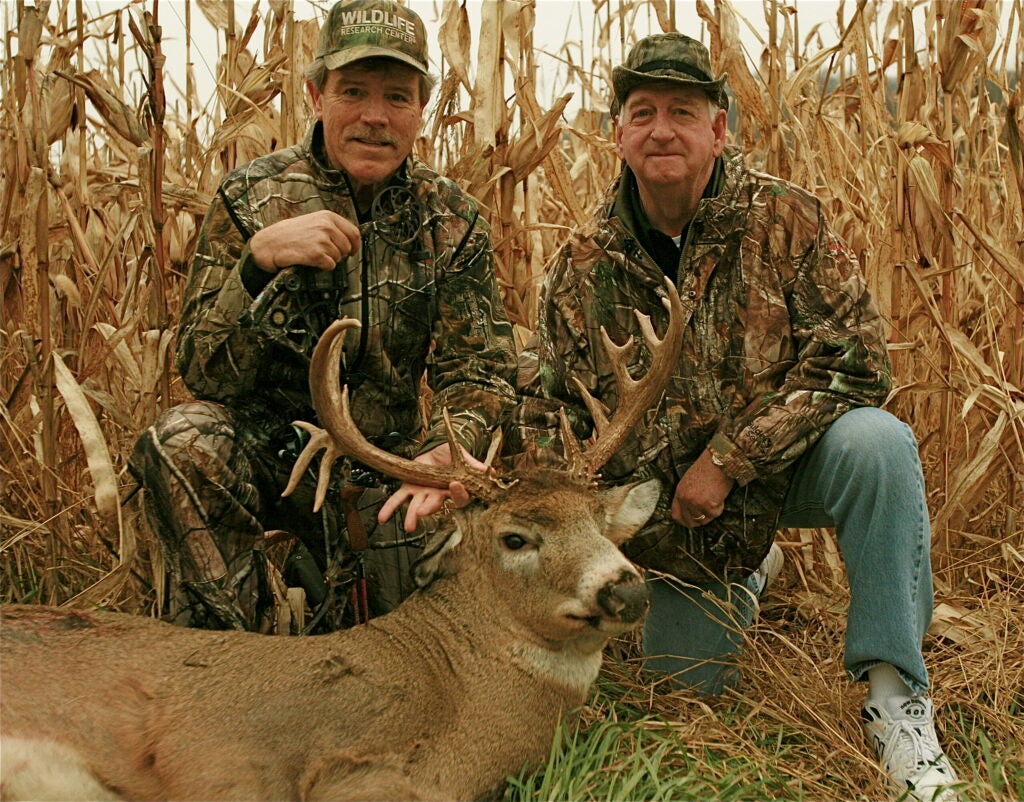 The author and Jim Brush pose with a nice Wisconsin buck taken by the former while bowhunting from the ground. Moore shot the buck from behind a fallen tree as it walked along a ridgeline trail.

Depending on the circumstances, sometimes I bowhunt whitetails from the ground. It’s not necessarily more effective most of the time, but then again, there are days when it’s the best expediency, especially if I’m hunting where I don’t have stands up, or there’s not an abundance of suitable stand trees in the right places for a climber.

Hunting deer from the ground isn’t a new concept; Native Americans managed to do it successfully for centuries. And back in the heyday of Fred Bear and other pioneers of modern bowhunting, climbing a tree to hunt from a stand was hardly a common practice. It’s no more difficult taking a shot at a deer from ground level than it is when you’re 25 feet up in the air. Depending on the amount of intervening limbs and branches, sometimes it’s better to shoot from the ground than it is from an elevated position. Either way, if you move when a buck is looking in your general direction, his peripheral vision is likely to pick you up. If you move or draw when he’s looking the other way, or behind a tree, you’re likely to pull off a decent shot.

The day I killed my best bow nontypical, I was stretched out on the trunk of a large tree that had been blown down by a storm, with my back resting against the root wad. It was early in the afternoon of a sleepy autumn day after most of the leaves had fallen and gone crunchy, and I was stationed about 25 yards up the ridgeline from a well-worn trail. There were rubs here and there, and I was scanning the steep ridge I was on, as well as the ridge opposite mine, to catch sight of what had made them.

As you probably know by now, rutting bucks will cruise high trails in the early afternoon when the thermals are still rising in hopes of picking up the scent of an estrus doe below them. I was hoping to get a shot at one of these walk-about bucks. I had posted a doe-in-estrus dripper—made by Whitetail Research Center, incidentally—on a branch behind a large tree on one end of the trail so that I would have the chance to draw undetected, and did the same with a second dripper where the trail moved away from me; I didn’t know from which direction a buck would approach, if at all.

I nocked an arrow and propped my bow up against the tree. I had already scratched all the leaves from around the bow so that I wouldn’t make a lot of noise if I rolled down from my comfortable perch to take a shot. Fifteen minutes after lying down on the tree, I heard a deer approaching from behind me. Screened by the root wad, I quietly rotated off the tree, picked up my bow and waited. Within several seconds I saw the buck; it was big-bodied with a non-typical rack that we later scored at 154 inches and change. Shooter, I thought.

The buck walked up to the dripper, sniffed it for a moment, and moved on. By then I had drawn the string. As the buck walked by, I bleated. It kept moving. I bleated again and it didn’t slow down. I shot it through the lungs as it walked and it ran about 40 yards, stopped and looked back, went all wobbly and fell.

A number of things had worked in my favor: I had good cover, I could see and hear a long way, I had positioned the drippers in strategic locations and I was upwind from the trail the buck was using. Perhaps most importantly, the rut was on and bucks drop their guards when they’re hunting for does. Still, I put myself in a position to succeed if certain things went my way. In that case, they did; usually, whether I’m up a tree or on the ground, they don’t.

The important takeaway from all this is that ground-hunting is a viable alternative to stand hunting. Nowadays any number of good ground blinds are available for hunters to use, but they inhibit a bowhunter’s mobility during the sometimes chaotic days of the rut when does and trailing bucks seem to be going in all directions. In such cases, using natural cover is a better option.

HEROES OF THE GROUND CAMPAIGN
Jim Brush of Galesville, Wis., and George Mann of Opelika, Ala., are two of the best ground hunters of modern times, and both have been featured in Outdoor Life. Brush, who’s bowhunted on every continent and has a 14,000-square-foot museum of big-game trophies at his house to show for it, did most of his deer hunting on his 1,000-acre farm in Buffalo County, Wis., near the Mississippi River. His favorite technique was to take a fold-up chair in the woods, get in a blowdown, rattle antlers during the rut, and wait for a trophy buck to come along. 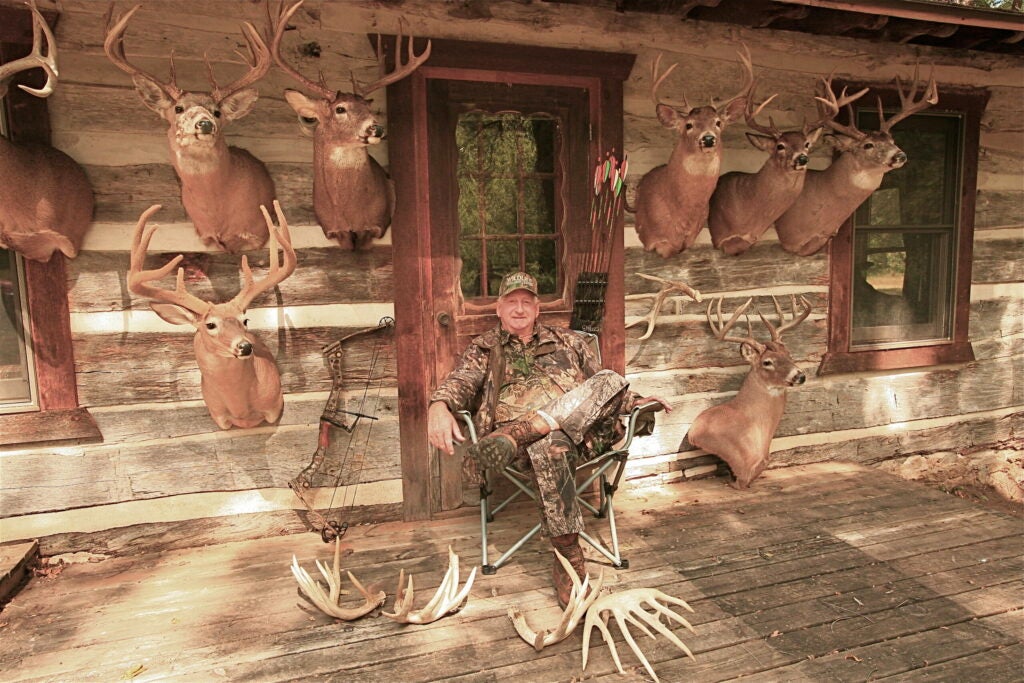 Jim Brush of Galesville, Wis., poses with some of his trophy whitetails taken while bowhunting from the ground.

For a number of years, Mann held the state archery record for whitetail buck in Alabama and his name has appeared frequently in the records books of the Pope & Young Club for a variety of game. One of Mann’s favorite ways to hunt deer was to clear some shooting lanes in a place with well-worn deer trails, then set in a chair at the hub of the shooting lanes. A few years ago, in Outdoor Life, an article about Mann was accompanied by a photo of him decked out in bowhunting regalia and sitting in a chair in an Alabama swamp. Incidentally, many of his big-game trophies can be seen in a special annex called the Mann Wildlife Learning Center at the Montgomery Zoo. 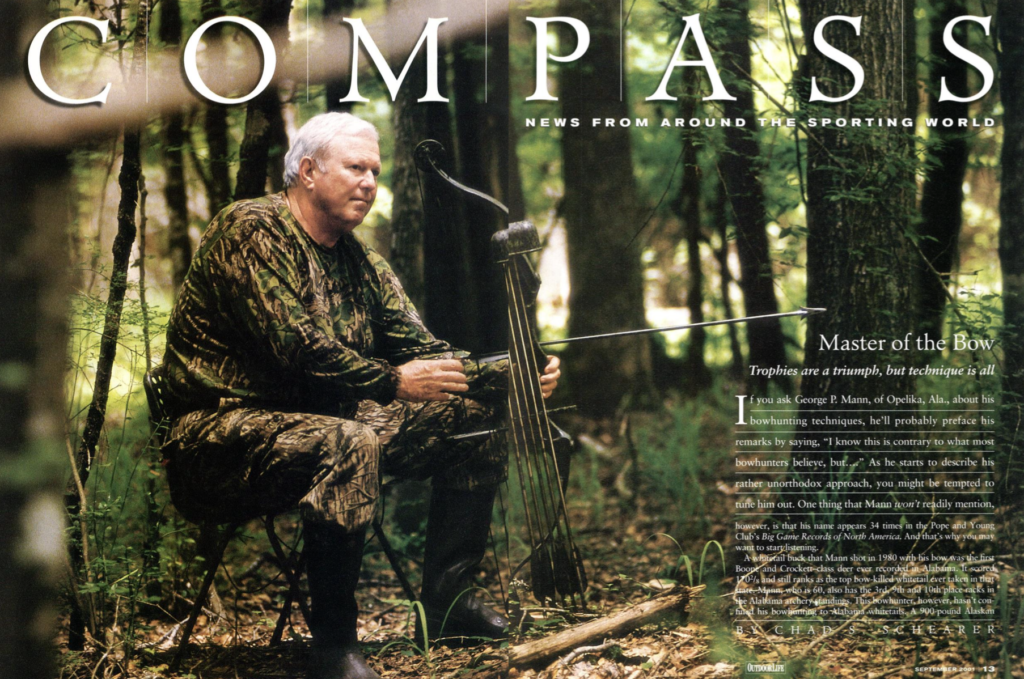 The story featuring George P. Mann in the September 2001 issue of Outdoor Life magazine. You can read the full story in our digital archives.

Brush and Mann had their own ways of doing things, usually dependent on the limitations of the regions where they hunted, but they shared a few common denominators that were critical to their success. The most important and fundamental rule to ground hunting is that the wind must be moving in a favorable direction relative to the bowhunter’s position, and a deer’s likely line of approach.

1. Set Up in the Right Terrain
Hilly woods or swamps with lots of folds, ditches, and creeks are best for ground hunting. The overgrown border or fence line adjacent to a field or food plot likewise can be good. If the cover at ground level is too heavy with palmettos, hollies, or other evergreen cover, vision will be limited and in that case it’s best to hunt from a tree stand. The main green cover on Brush’s farm is cedars and a few hollies; on Mann’s property in east-central Alabama, it’s palmettos, magnolias, young pines, and cedars.

2. Be Still
There’s not much wiggle room for wiggling when you’re hunting on the ground. If you’re under, say, 18 years old, maybe a camp stool will work, but if you’re like most of the rest of us, a well-padded camp or dove chair with back support is a better option. Just make sure that you can draw your bow from a sitting position without banging it against metal arms or an inordinate amount of movement.

3. Hide Effectively
You can’t sit in the open. Presuming you have a folding saw with you, cut out a roomy bowl in a fallen treetop near a well-used trail or scrape line and sit there. In the woods, the best ground blind of all is a big cedar whose branches have been lopped off near the base and up the trunk to the proper level. Once you’ve cut out a fairly wide niche, you become virtually invisible. The remaining cedar branches help stifle your scent, too. Wherever you hide, and not counting wind direction, the most important consideration is back cover; that is, there must be something to screen your body so you’re not skylined. This is especially critical when you set up at a higher elevation that affords you a good view of the surrounding terrain. If it’s late evening, try to find a shallow, dry gully or creek bed, preferably with stumps or blow-downs that you can get next to or behind. When you position the chair and sit down, you should be able to see the surrounding woods just above the bank.

4. Hunt the Rut
The very best time to hunt from the ground is when the rut is at its peak. Bucks will temporarily abandon much of their natural caution and wander around in unfamiliar territory searching for does. Of course, it’s also possible to hunt bucks successfully any time in the fall or winter around feeding zones such as patches of oaks, picked cornfields, or food plots.

5. Travel Light
Be prepared to move; if a buck is chasing does around the bedding area on the opposite ridge, figure out a way to get over there and set up when things quiet down. A good traveling pack might include a compact binocular, folding saw, snips, 10 feet of camouflaged blind cloth for a backdrop, and a rangefinder, plus a small chair and your regular hunting stuff.

Hunting at ground level gives a bowhunter a nice break from sitting in a tree stand for hours and waiting or something to come by. Then, too, some bowhunters simply aren’t physically able to climb up and down a tree to a lock-on, or use a climber.

Jim Brush, in the upper Midwest, and George Mann, in the Deep South, hunted different regions in different climates, but they shared fundamental rules and observed them to good effect. Most importantly, perhaps, nobody told them that they couldn’t hunt whitetails successfully from the ground. They believed that they could do it, and then they went out and proved it.