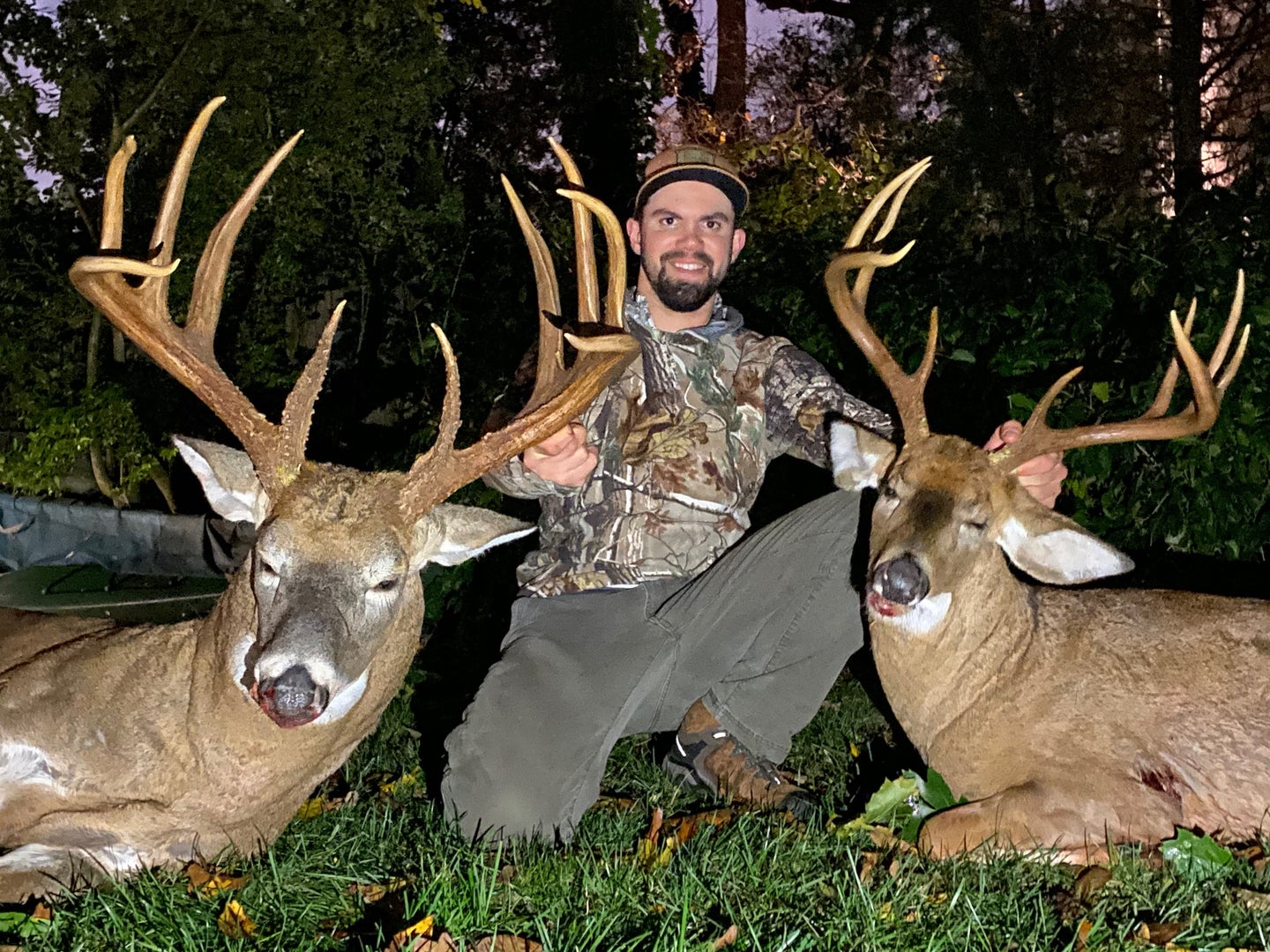 If you drive I-80 east, it’s approximately 430 miles between Niagara County in extreme western New York to Suffolk County on the eastern most tip of Long Island. In terms of deer hunting country, the two regions couldn’t be more different—fertile flatlands to the west and suburban sprawl to the east. Each will now be known for producing state-record bucks during the 2020 bow season. If you want to read about the new nontypical record, check out the story on Field & Stream. This is the story of the biggest typical buck ever take with a bow in New York.

The New No. 1 Typical

Dieter Herbert of Huntington, New York, is a self-admitted whitetail addict. This 27-year-old New York City carpenter spends countless days and dollars scouting, planning, and hunting whitetails. He first started hunting at age 16 with his dad, Rick, and that’s all it took to get Dieter Herbert hooked for life.

The suburban tracts of land that he hunts are generally 20 acres or less in size. In Nov. 2019 a giant buck with a split G4 appeared on one his trail cameras. Herbert said that he knew right away that it was a world-class buck and he nicknamed it “Split G4.”

In 2020, Herbert spent countless hours scouting and putting up trail cameras on different tracts of land in an effort to learn the legendary buck’s habits. In August, Herbert built himself a ground blind out of cedar boughs and other brush on a hillside overlooking the mock scrape where Split G4 originally appeared on trail cam. Unfortunately, Split G4 seemed to have disappeared as the buck hadn’t made an appearance of any kind all summer.

On the morning of Halloween 2020, Herbert hunted another tract of land in hopes of shooting a 150-class buck that lived there. But the deer weren’t moving that morning so he climbed out of his stand early to check some trail cameras on other properties. When he got to the tract where he built the ground blind, he pulled the card from the camera and to his delight saw several pictures of Split G4 just before dawn working the mock scrape. Knowing the big buck was probably bedded down in the brushy tract he backed out, went home and grabbed some lunch and his gear, then went back for an afternoon hunt.

Herbert returned to the woods and settled into his ground blind at about 1:30 p.m. He was prepared to wait it out until dark in hopes of a chance at Split G4. After being in the blind for only about two hours, Herbert arrowed a 130-class, nine-pointer that expired within sight of his blind.

Herbert called his brother to tell him about his hunt when he heard another deer approaching through the tall CRP grass behind him. He quickly ended the phone call and waited.

“I just had a gut feeling it was Split G4,” says Herbert. “I heard his antlers on a branch and knew he was working a ground scrape about 50 yards away.”

When it finished working the scrape, it sounded as if it was walking away so Herbert made a few grunts and the buck stopped and began walking back towards him.

“It seemed like 30 minutes because the buck was approaching very cautiously but it was more like five minutes,” says Herbert said. “He was in that tall grass and I knew he was close, but I just couldn’t see him.”

The deer finally appeared just 10 yards away. It was Split G4. Herbert was on his knees in the ground blind. The buck had its head in the air surveying the area with its nose. Once it turned its head Herbert came to full draw and stood up. The buck threw his head back in the hunter’s direction, but it was too late. Herbert’s arrow got half penetration into the buck’s vitals. (It is permitted to shoot two bucks on the same day in Suffolk Co.)

“On impact it took off through the brush plowing down saplings and disappeared,” says Herbert. “Then the woods fell silent and I knew he crashed.”

Herbert wanted to get on the blood trail before it was dark and found his buck just 30 yards away.

“I was so excited that I was literally sick to my stomach,” says Herbert. “The buck’s antlers and body were much larger than I anticipated.”