Whitetail Fawns on the Ground: Will They Make it to Fall?

It’s official, the fawns are on the ground. Anyone who can count to two hundred backwards knows the results of... 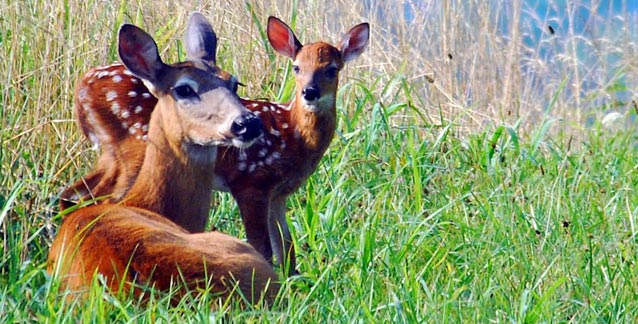 Actually, the fawning season can be a pretty cruel time in the woods. Research indicates that under normal circumstances, at least 30% of all fawns will die prior to reaching maturity. It starts with fawns at birth, the weak, sick or malnourished. Fawns are typically born weighing six to eight pounds. There is little a doe can do to save a fawn that is too weak to nurse. And then there is doe rejection and abandonment. Not all does are good mommas, especially those living in areas of poor nutrition. Abandonment rates of 10%-30% have been reported in the scientific research. The predators get what seems like way more than their share. Coyotes, black bears and bobcats take huge numbers of fawns from the ranks. Predator populations have exploded in some areas. Dense predator areas often report rates of 50% and higher fawn mortality rates. Some studies have reported it takes 9 or 10 does to produce a single sub-adult fawn. And then there is man and his machines. Who hasn’t seen a road killed fawn? How about a fawn that has gotten tangled up in a haybine? It ain’t a pretty sight.

Most of the mortality takes place in the first two weeks following birth. Predation is especially high during that time period. After two or three weeks predation gradually declines. At 3 weeks of age most fawns can avoid danger. So right now deer populations are at an annual high. They will decline daily until next year this time.

Short of accepting the realities of being a fawn, there isn’t a whole lot we can do about the tough odds facing the fawn crop. Start with the 30% mortality rate. That has been around forever. Study after study has reported that as just a fact of nature.

That’s why so many does produce twins. Predation can be attacked and many do, with mixed results. And you can keep your eyes open on the highways and do your mowing when the fawns are old enough to scamper out of your way.

Your best approach to helping the little guys along is to create plenty of food and fawning cover for mamma and the kids. Healthy, well-fed does make good mothers and usually drop twins. Good cover keeps the kids alive. Being born in a good neighborhood is the best thing a fawn could ever hope for.