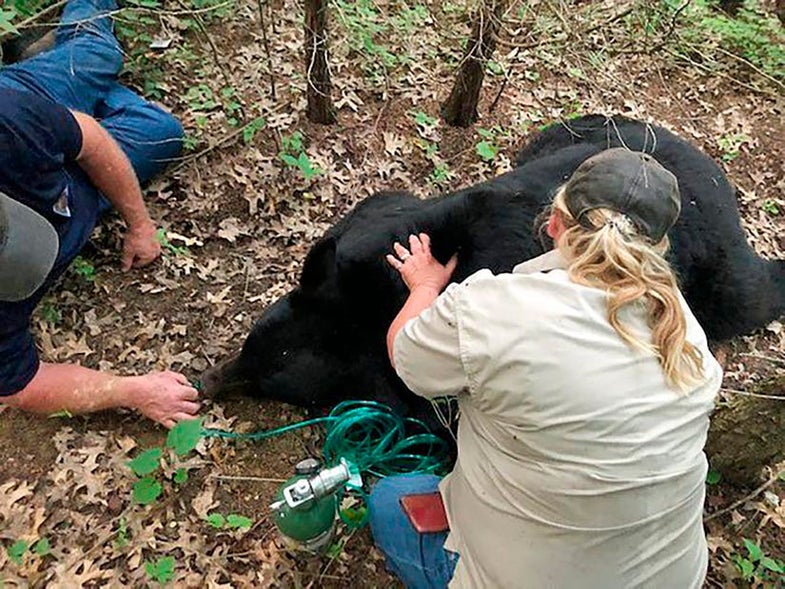 New research from Oklahoma indicates that black bears are far smarter than we give them credit for.
SHARE

Sue Fairbanks has learned a lot about eastern Oklahoma black bears in her eight years of studying them.

“They [bears] are a lot smarter than I realized,” says Fairbanks, who works at Oklahoma State University’s Department of Natural Resource Ecology and Management.

Bears show their smarts in many ways. Perhaps most noteworthy is their ability to problem solve in obtaining things they need to survive, like food.

“One of the biggest ways bears get into trouble with people is from eating corn from deer feeders,” Fairbanks told the Oklahoman newspaper. “It’s not so much that they eat the corn, it’s that they tear apart the deer feeder in the process. That’s probably the biggest complaint we have about black bears.”

Some people modify feeders to thwart bears from getting into them, but it’s not easy to permanently stop them, because of their intelligence.

“We had one guy [landowner] who thought he had it,” Fairbanks says. “He electrified the legs holding up the feeder, but we had a bear that learned to unplug it. The bear just comes up and takes his claw and unplugs it and does whatever he wants to.”

The bear got shocked a few times before it figured out how to unplug the feeder. But once learned, it didn’t forget.

“When they learn things like that, they teach their offspring,” says Fairbanks.

Eastern Oklahoma has about 1,500 bears, mostly in Cherokee, Adair, and Sequoyah counties. Fairbanks and her graduate students capture bears with baited trailers or snare traps, weigh them and get blood samples to check for parasites and disease. Trapped bears are fitted with GPS collars so they can be tracked and studied.

Over the years they’ve learned much about bear habits, birth rates, movements, and preferences.

In the Oklahoma Ozarks, the bear population is hardly growing (6 percent rate) because two-thirds of bruins are male, Fairbanks said. The growth rate was 17 percent before the state wildlife department opened a black bear season in 2009, which presumably has slowed bruin growth.

“We found males go anywhere, but females are sensitive to habitat fragmentation,” Fairbanks reports. “They will only set up territories, their home ranges, in areas that have less fragmentation.”

During breeding season male bears travel extensively. Fairbanks says one collared bruin covered 40 miles annually to an area in Arkansas that she believes had more female bears suitable for mating.

“Young males travel so much looking for a place to find a home, a place to settle, that they often get into trouble going into towns,” Fairbanks says. “Not only are they looking for places with suitable habitat, they also are avoiding large males that could potentially kill young males.”