Really good food, and really good game recipes do not have to be fancy, or pretentious. In fact, within the...

Really good food, and really good game recipes do not have to be fancy, or pretentious. In fact, within the foodie/culinary industry there has been a backlash from stuffy, white tablecloth dining and menus filled with words no one can pronounce. Slowly and steadily that model is being replaced by rehabbed warehouses filled with salvaged wood and industrial iron, appointed with communal dining tables that bring complete strangers together around superb simple American cultural foods like bacon wrapped quail, venison steaks, rabbit stew, flaky southern biscuits, and amazing mashed potatoes.

So it is with Chef Daniel Gorman, the chef de cuisine at 5th & Taylor in Nashville’s Germantown district. On a recent visit I sat down with Daniel to discuss the bacon wrapped quail appetizer that has become an overwhelming patron favorite. We talked food, outdoors, and wild game:

“5th & Taylor is super casual, but super refined”, says Gorman. “ We make everything from scratch. Every sauce, every dressing, every cracker, every noodle, every piece of bread, is made in house. And we do it everyday with a whole lotta love.”

That includes the 50 gallons of mashed potatoes prepared daily and served to every table free of charge. They have become the restaurant’s signature centerpiece foodstuff.

“If it doesn’t go with mashed potatoes, you won’t find it on our dinner menu”, Gorman says with a smile. “Brunch on the other hand centers around big ‘ole bowls of free grits.”

Gorman grew up in Charleston, SC , but moved to Cold Mountain, NC when he was twelve years old. “My grandma from Charleston was what we call low country southern. She made things with shrimp, blue crab, sausage and grits. My other grandma lived in an area of Cold Mountain called Smokey Cove. It’s a moonshine kind of place. “ he says with a wink and a nod. “That’s more country southern. She grew farm vegetables, and made things like red eye gravy and biscuits.” 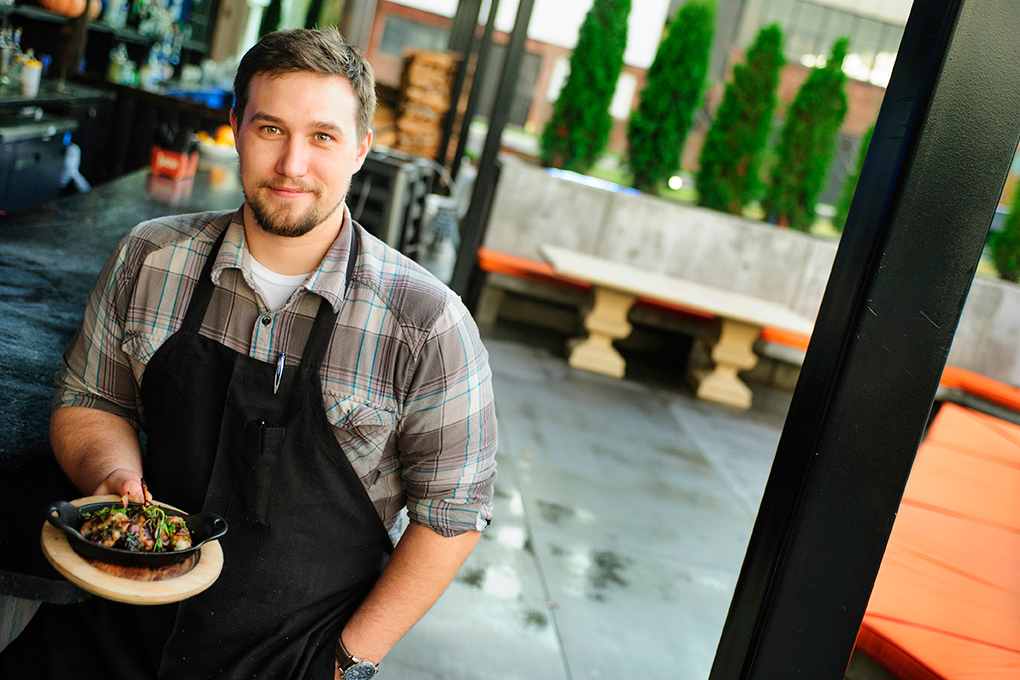 So how did game like venison, quail, and rabbit find their way to the menu?

“I was a low country boy when I moved up Cold Mountain. It was bear hunting season. There are dead bears everywhere, deer hanging on the backs of trucks, and I’m in culture shock 101. I’m 12 years old and wondering what’s going on? And then I start eating what all these wonderful, self-sustaining mountain folks are bringing us—squirrel stew, bear jerky, ground venison for breakfast—and I just fell in love with it. I always wanted to have it on a menu because it’s great food; organic, completely natural, free-roaming, with a nice gamey flavor, but without being too pungent. It’s clean food, lean, healthy and always works well as a standout on a menu.”

As for that bacon wrapped quail appetizer?

Gorman says, “Bacon wrapped quail is simple, but a labor-intensive process. You break ‘em, stuff ‘em, wrap ‘em, skewer ‘em and then grill ‘em over wood.” He adds, “ The quail is really nice because it doesn’t over-cook so quickly…especially when wrapped in bacon. And it loves smoke. The grill is the heartbeat of our kitchen. Eighty-five percent of the menu is cooked on a woodburning grill in the restaurant. That includes some of our desserts.”

Chef Gorman goes on to add, “Nowadays its easy for restaurants to get quality game at a reasonable price. Nine outta ten times it’s a cleaner product. It’s hard to get quality beef in America sometimes. It’s hard to get really good pork, too. Feels like it’s easier to get a really good rabbit, or a saddle of venison. It’s a very American thing to have venison, and quail and rabbit on a menu. We like game a lot here at 5th & Taylor. But we do serve amazing beef, chicken, and fish, too.” 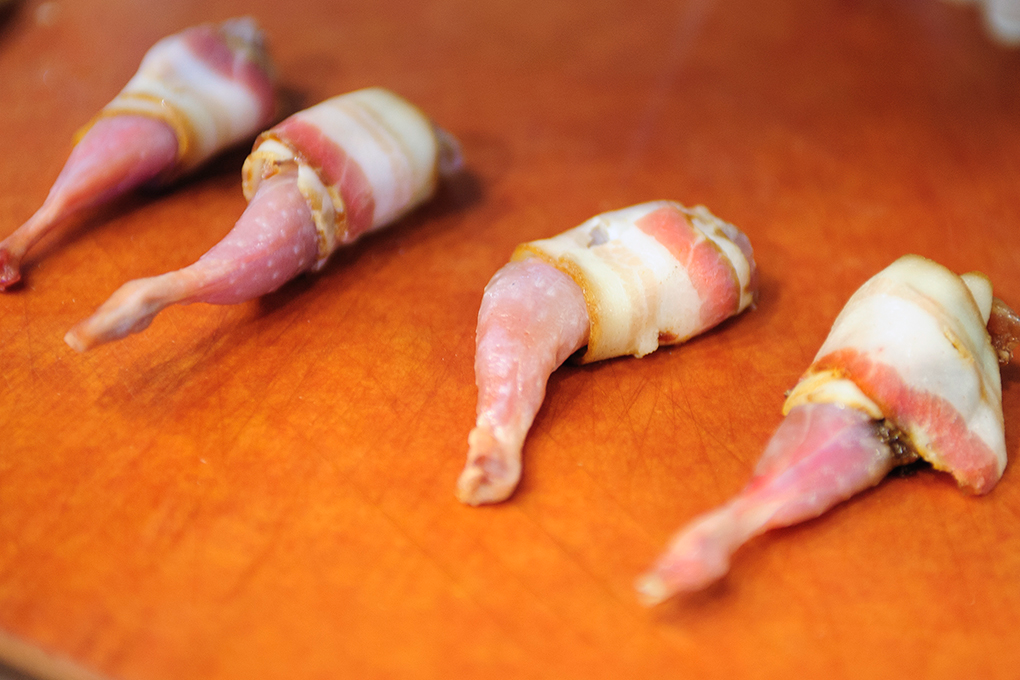 1. Begin with whole quail. Split them in half, then quarter. You’ll want to have four legs and four breasts. Very lightly salt the inside flesh. Discard of winglets, or save to add to homemade stock recipes.

2. Peel, seed, split-and cut Medjool dates into quarters. (Each ¼ of the bird gets a ¼ of the date.) Manipulate the flesh around the date and then wrap with Benton’s bacon. Benton’s is the smokiest bacon ever and it comes from Tennessee. (It’s the Pappy Van Winkle Bourbon of the bacon world!)

3. Skewer the quail quarters, salt and pepper lightly, and drizzle with olive oil. 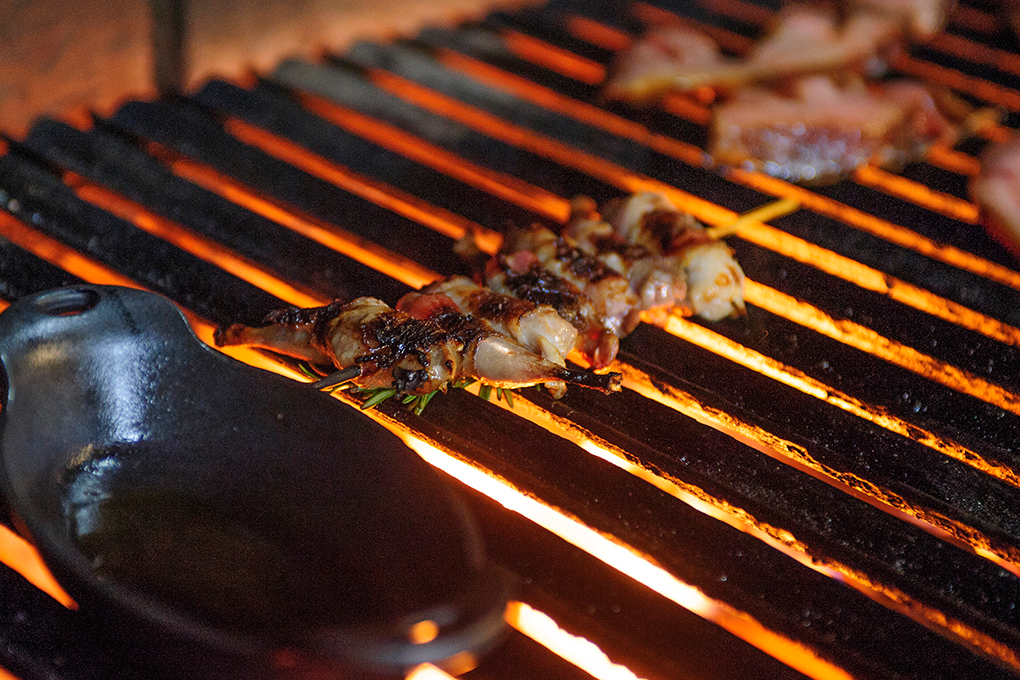 4. Place the rosemary on a hot, wood smoke grill, then quail on the rosemary. (A little bit of charred rosemary flavor, as well as the aromatic will pop up into the quail.) Cook for 3 minutes per side. As with all things game, you don’t want to over cook, though the quail is forgiving with the date tucked in side. 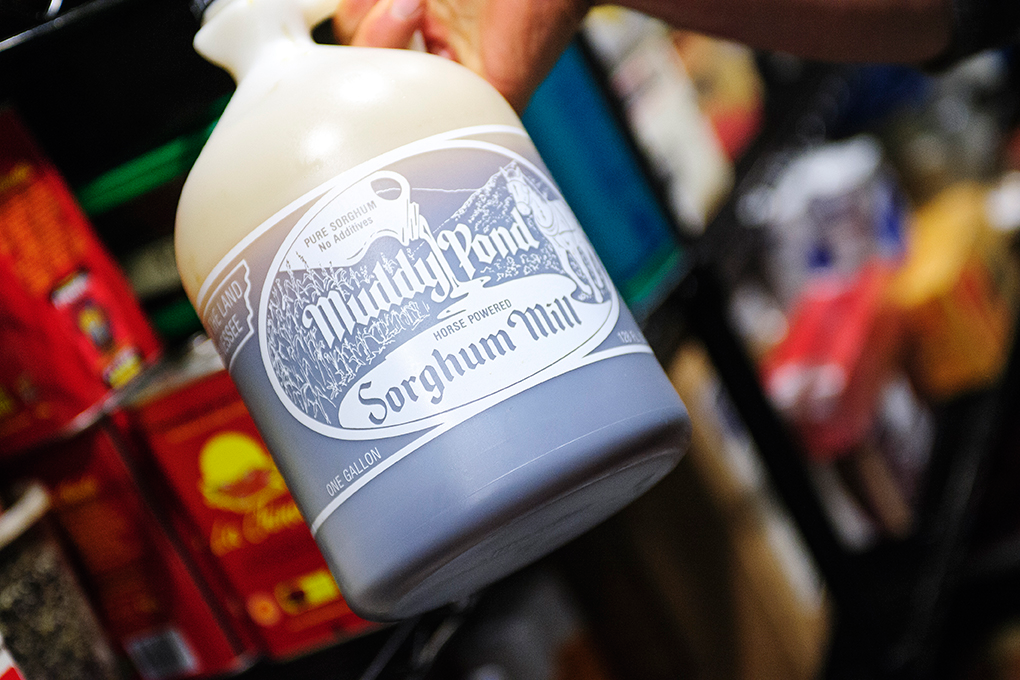 5. When they come off the grill, lightly glaze with sorghum (Muddy Pond is a good one), or maple syrup. Interesting note: In the north, maple syrup is the king. Sorghum is more popular in the south and is a relative newcomer for at home cooks. As Chef Daniel says, “If molasses and maple syrup had a clean baby, it would be sorghum. Not as heavy or strong as molasses, not as sweet as maple. It’s in between with a more savory note. “ 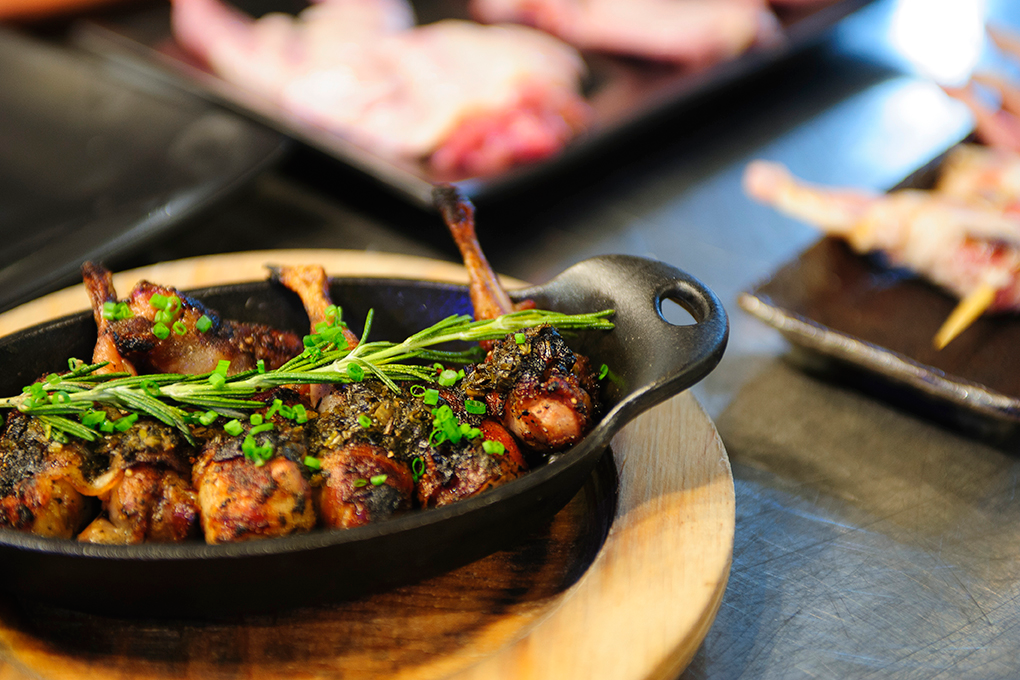 6. Hit the quail with a hint of vinaigrette dressing, some snipped chives, and a garnish of rosemary.

Enjoy the smokey bacon, little sweet date on the inside, and the beautiful quail itself.