It’s easy to toss the “best” label on something in a desperate attempt to get folks to view it online.... 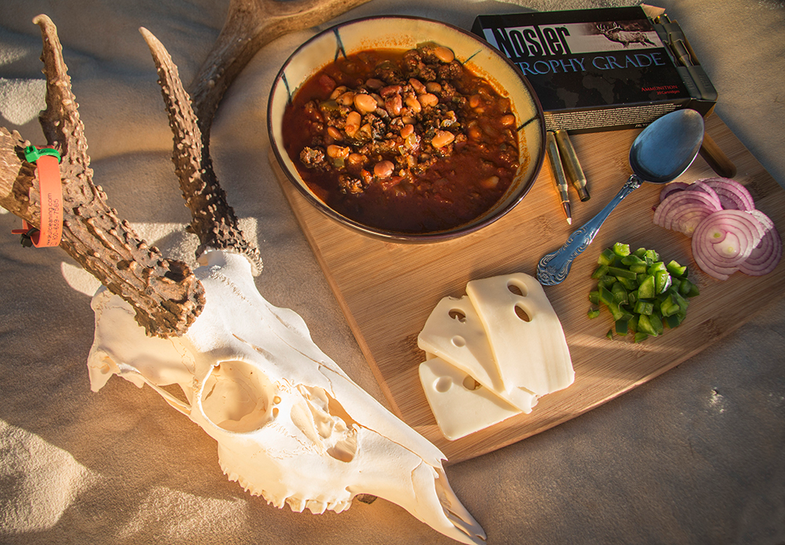 It’s easy to toss the “best” label on something in a desperate attempt to get folks to view it online. That’s why I didn’t take it lightly when I decided to deem this venison chili recipe as the best.

Well…at least I can confidently say it’s my personal best.

The History
In one of my previous lives, I worked as a cook at a dive bar where the kitchen was equally likely to reek of exhaust fumes from a Harley Davidson, or the burning remnants of old appetizers in a dirty deep fryer that was long overdue for new grease. The same freedom that allowed me to keep a six-pack of cold ones handy on the clock was applied to my cooking practices. There were virtually no limits. Our high-class kitchen crew could order off-the-wall ingredients and concoct whatever we wanted, even if we would be the only ones eating it. It was here where I experimented with chili for years, gradually perfecting what I can now call my best chili recipe.

The Name
When it was time to give my venison chili recipe a name, I almost went the bland route and simply called it “Sweet and Spicy Venison Chili.” But after all that went into this recipe, I wasn’t about to sell myself short by giving it a lame name. So, I chose to incorporate the three most important ingredients (besides the obvious—venison) in the name: “Joe” for the coffee; “Drunken” for the beer; “Sugarbush” for the maple syrup.

1. Put a cast-iron Dutch oven (or a big enough pot) on medium heat. I used a classic 12-inch Dutch oven from Camp Chef. Add the half stick of butter.

2. When the butter is melted, add one diced onion, one diced bell pepper, all five cloves of minced garlic and the full package of diced mushrooms. After a few minutes, push all ingredients to one side of the cooking surface.

3. In a separate container, mix your venison and Little’s chili seasoning packets so it’s evenly distributed. Note: Use Little’s Original Seasoning Mix if you’re not a fan of spicy food. For an extra edge, use Little’s Hot Seasoning Mix. Add your chili meat to the open half of the cooking surface.

4. Fry all the ingredients until the onion begins to caramelize and the venison is mostly cooked (medium or medium rare is fine).

5. Add one diced onion, one diced bell pepper and all other ingredients (except cheese) to the Dutch oven and simmer for 2 hours, uncovered.

6. Here’s the most important part: Resist the urge to eat it immediately. Cover it and allow it to cool in the fridge overnight. This will give the flavors more time to mingle before the party gets really wild.

7. Reheat it within a few days. Top with shredded cheese, plus the remaining diced onion and bell pepper. Share with friends, and don’t forget to tell ’em where the meat came from.