How to Hunt Turkeys in the Winter

Who says you can’t call in gobblers in the wintertime? During the long, liberal winter season in the Plains states,... 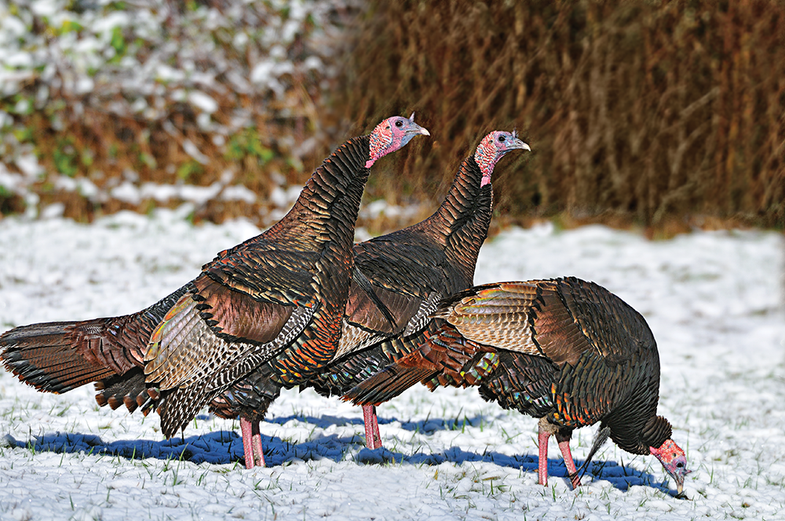 Who says you can’t call in gobblers in the wintertime? During the long, liberal winter season in the Plains states, hunters with a variety of simple calls can take multiple gobblers in a single calling session. It helps to also have a high tolerance for cold.

he otherwise peaceful winter morning was disrupted by two dozen strutters and subordinate toms aggressively gobbling, challenge-purring, and posturing as they made their way to my tail fan. I tried to sort out the best beards in this approaching wave, but it didn’t matter. These were all adult gobblers, and at least 50 more longbeards were coming behind the first gang. The legal limit was four. If they separated, I might have the chance to fill all my tags in this single crazy calling session.

This is my favorite of all turkey hunts—the winter season in Kansas. A hunter will see more turkeys, hear more turkeys, and potentially call in more gobblers now than during any other season of the year. This is true not only in Kansas, but also in its neighboring states, including Nebraska and South Dakota.

Virginia and other states east of the Mississippi reopen their turkey season in January, providing hunters with winter opportunities as well, but wintering flocks of Easterns are generally not as large as those of Rios found across the open plains.

Adding to the appeal of a Sunflower State hunt are limits that are double those of the spring season. Plus, the season extends to the end of January, which means you can combine turkey hunting with some fantastic waterfowling.

The undiscovered appeal of winter hunting
Hunters who pursue turkeys in late December or in January often get access to private lands that are closed to deer hunters during the gun season. There is virtually nobody turkey hunting in January. That may be because of the sometimes brutal cold and snowy weather, or it may simply be because hunters have yet to discover this opportunity.

The sight of hundreds of wild turkeys in their winter flocks is something to behold, and the turkey vocalizations can be intense and almost deafening when you’re close to the roost. The birds generally segregate according to sex, and they will be bunched together when they’re at a common food source. I’ve seen gobbler groups that exceeded a hundred.

These birds are often a mix of Rios, Easterns, and Merriams, or hybrids of all three. In the open country of Kansas, Nebraska, and South Dakota, the birds are very visible, providing the hunter with the opportunity to develop his strategy.

My approach is simple: Get as close to that gobbler group as possible and then set up undetected, generally in the edge of timber, along a brushy fence line, or in other cover. Then I place my tail fan or a Montana Decoy strutter between my calling position and the turkeys. Once I return to cover, I begin gobbling on a tube, and I throw in challenge-purring and gobbler clucking on a double slate and mouth yelper. I try to make as much commotion as possible, which includes using a dried turkey wing or my cap to flog the ground or my pant leg. This simulates the almost constant fighting and reestablishment of the pecking order that goes on within a gobbler group from the time they fly down from the roost in the morning until they fly up in the afternoon.

I watched that flock of Kansas gobblers approach my setup, and then I watched the toms flogging and spurring my tail fan, I had to wait carefully until a single longbeard peeled off to the side of the melee. I needed to keep my 20-gauge load of tungsten-­alloy 7s from taking out multiple birds. Even with four tags in my pocket, I didn’t want to end the hunt on the first morning.