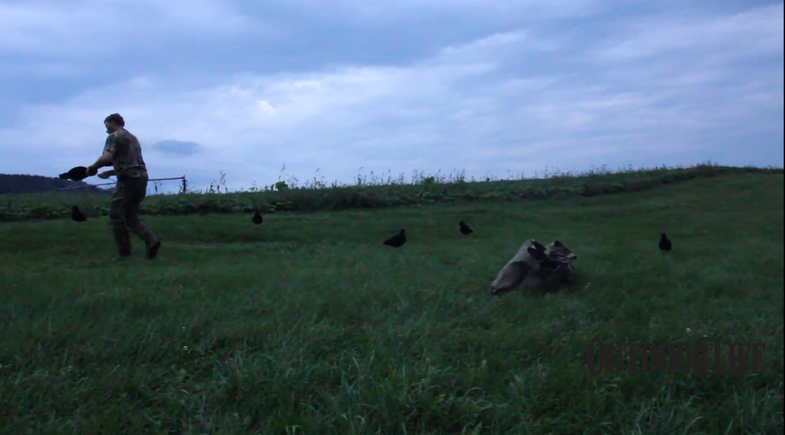 Last week I got the chance to tag along with Todd Gifford, an expert crow hunter from southeastern Minnesota. Like most guys, I never considered crows to be much of the gamebird species. But after hunting with Gifford, I might have to reconsider. He scouted ahead of time, he took his decoy setup extremely seriously, and he had a specific approach for crow calling. Gifford, who runs a pest control business, has refined his tactics over years of chasing crows, and he and his guided clients have taken more than 15,000 of the birds.

Here’s what I took away.

1. Scout and Pattern
Like hunting waterfowl, you want to be on the X. Farmers will happily tell you where the birds are feeding, and you can glass in the evenings to find out where they are roosting. Once you figure out exactly where the birds are finding their meals, sneak in before it gets light and make sure not to get busted by any birds roosted nearby.

2. Real Deal Dekes
Gifford uses full-body Avery crow decoys and sets a spread of 30 to 40. When he observes a mob of crows on the ground, he’ll try to set his decoys in exactly the same position on the following day.

3. Call Light, Then Loud
At first light, Gifford is more conservative with his calling. He uses a mouth call, but mostly lets his decoys do the work. The idea is to get the birds to come in strings—not a whole mob or murder at once. If you call in a big mob of crows first thing, your hunt will likely be done for the morning. Later in the morning and in the afternoons, Gifford will blast an electronic caller, starting at medium volume and then cranking it all the way up.

4. Load Up
The crows we shot were about the size of a small hen pheasant (we were shooting mostly young bird; the bigger, mature birds come in during the winter months). However, as Giffords says, “crows die hard.” So we used 12 gauges and 5 shot Prairie Storm. Some crows came right into the decoys, but most just flew over, offering shots at about 30 yards.

One last note: You can eat crow (contrary to popular belief) and we took the breasts. Stay tuned for that recipe.