A Recipe for Duck Apple Sausage, and Some Helpful Guidelines for Making Wild Game Sausage

I was digging through the freezer the other day, and came across a bag of duck meat from last year.... 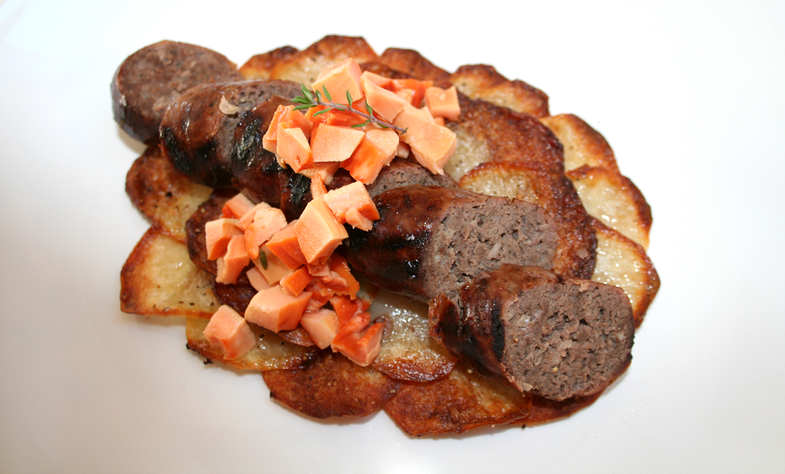 I was digging through the freezer the other day, and came across a bag of duck meat from last year. I must’ve been saving it to make sausage before it got buried under everything. So I took it out to make a duck sausage. My wife had recently gone out to eat and brought home her leftovers: roasted duck with apples, onions, potatoes, and sage. It inspired the recipe below, and it turned out amazing. I grilled my sausages, served them on a bed of potatoes, and topped them with pickled chicken of the woods mushrooms. And, below the recipe, you’ll find some guidelines for how I approach sausage making. 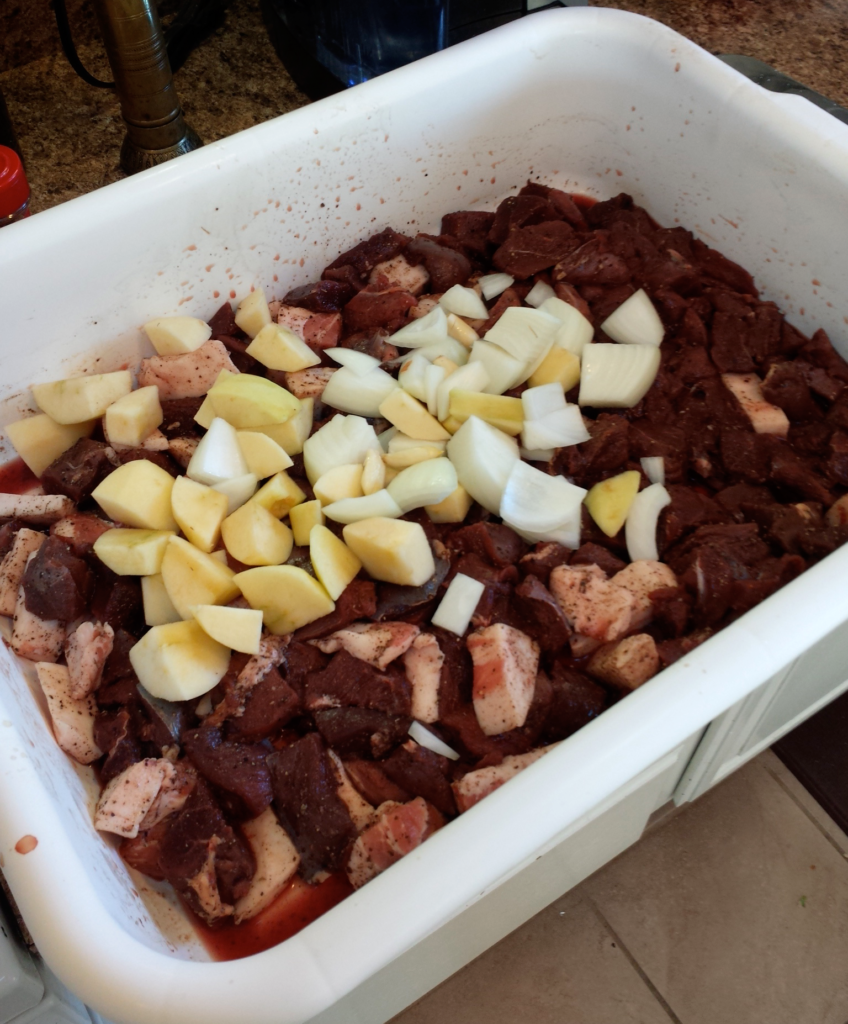 Directions
Cut the duck and pork fat into 1 inch cubes that will fit in your grinder and mix in all other ingredients except the powdered milk. Place in the freezer for one hour. After one hour, grind through a medium die, mix in the powdered milk, and stuff into natural hog casings. Link your sausages by twisting them in opposite directions in the sized of link you would like. Let them sit in the fridge overnight and uncovered on a backing sheet lined with paper towels. This will dry the casings and allow them to tighten up before freezing. These sausages are best grilled over medium heat. 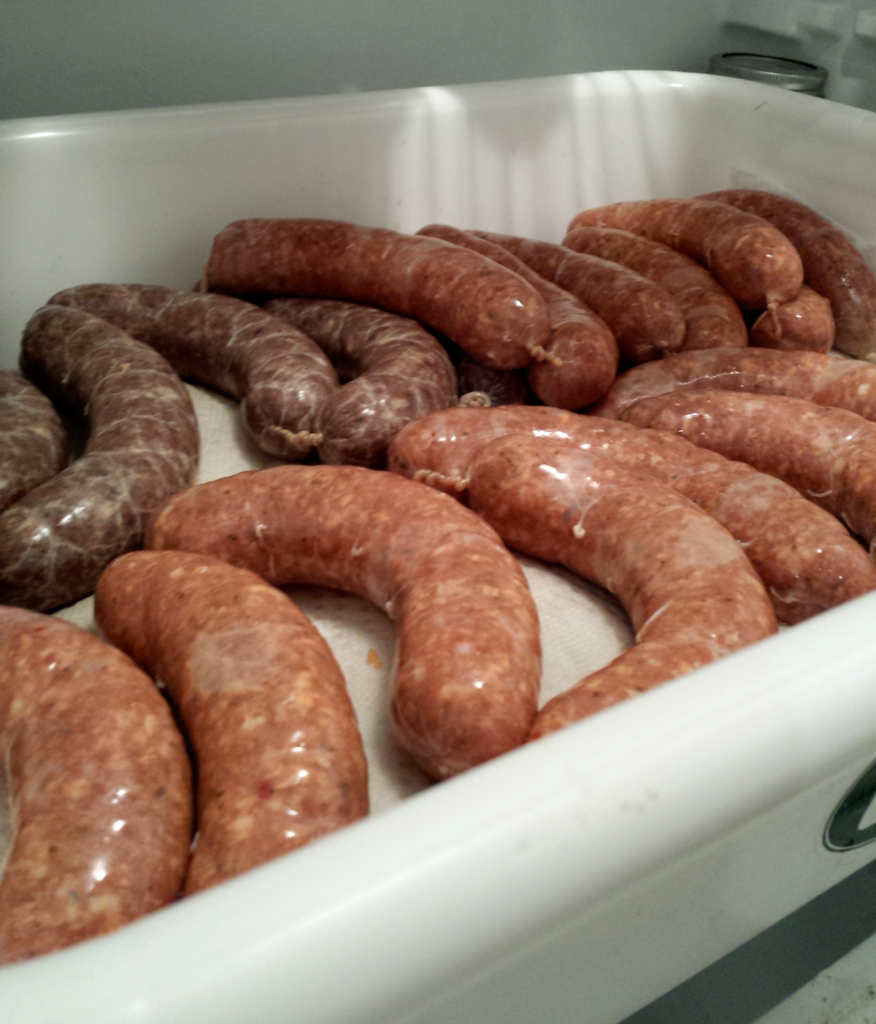 What’s the most useful thing I’ve learned in all my years of hunting? Learning to make sausage. It’s not a skill necessary for harvesting wild game, true. But it has helped me utilize every bit of the game I do get.

We all love backstraps and tenderloins and big roasts, but those aren’t the only cuts worth praising. There’s a lot of scrap meat from the neck and back and legs that can be used to make sausage. Plus, if you have an older buck that might be a little tough or potent, mix in some pork fat trimmings and make summer sausage. Or a spicy chorizo. I had always been told that coots are inedible because they taste so bad. Then I went out, shot 30 of them, made a batch of cotechino, and fed it to some friends that said the same thing. They never knew.

Once you get comfortable making sausage, you can use pretty much any meat you want. I’ve used pheasant, rabbit, coots, and catfish, along with just about every big game animal in the U.S. It’s also a great way to use offal: Mazzafegati is an Italian sausage that uses the liver and can be made with venison and wild pig. Some people aren’t willing to try a moose steak (unbelievable, but true). But make it into a juniper moose sausage and everybody wants to give it a try.

Sausage making is a fairly easy skill to learn, but it can be difficult without the proper equipment and some basic know-how. The first thing you will need is a meat grinder; there are dozens of grinders on the market ranging from $70 to hundreds. If you own a Kitchen Aid mixer, there’s actually a grinder attachment sold separately that works very well. If you only intend on making small batches of sausage, that’s a great option. However, if you intend on making lots, I recommend buying a larger grinder.
Next, you’ll need a sausage stuffer; a ten pound stuffer can be purchased for $70 to $100 and will make stuffing your sausages a lot easier. Most grinders come with a stuffer attachment, but they’re slow and often bothersome to use. It’s totally worth the money to buy a stuffer.

Once you have your basic equipment, sausage making is only as difficult as you make it. It can be as easy as buying a kit that includes all the casings and seasonings or as difficult as fermenting your own salami. Fresh sausages are a great place to start, and include bratwursts, Italian sausage, and Merguez. These don’t require any smoking or curing—all you have to do is fry them in a pan or throw them on the grill. The four basic components to fresh sausage are the meat, fat, salt, and seasonings. Most wild game doesn’t have a lot of fat, so you’ll have to add it. I like to use pork back fat. Some people use beef suet but I’ve found that pork is milder and doesn’t change the flavor of the wild game as much as beef suet.

I use a 70/30 blend of meat to fat, meaning 70 percent wild game meat and 30 percnt fat. So, when making a 5 pound batch of sausage, that comes out to 3.5 pounds of meat and 1.5 pounds of fat. That’s a good ratio for sweet and spicy Italian sausage or Merguez. Other sausages like bratwurst have a different blend.
Salt comes next. Too much can ruin your sausage and too little will leave it bland. I use 40 grams of kosher salt, or about 3 tablespoons per five pounds of meat and fat. The last ingredient is the seasoning: create your own blend or follow a sausage recipe, it doesn’t matter.

There are a couple safety tips to keep in mind Keep your meat as cold as possible. It’s possible to thaw meat to a usable level while keeping it mostly frozen. It grinds better and helps prevent bacteria from spreading. In between grinding and stuffing your sausage, it should be kept in the fridge (or outside, in the winter) so the meat doesn’t get warm. You never want the meat to get above 40 degrees. If your meat gets too warm, it can break down. Say goodbye to nice, firm sausage and hello to mealy meat.