No single factor can dictate the intensity of rut activity on any given day. But if you interpret this combination of breeding-season influences correctly, you will be in the right place at the right time 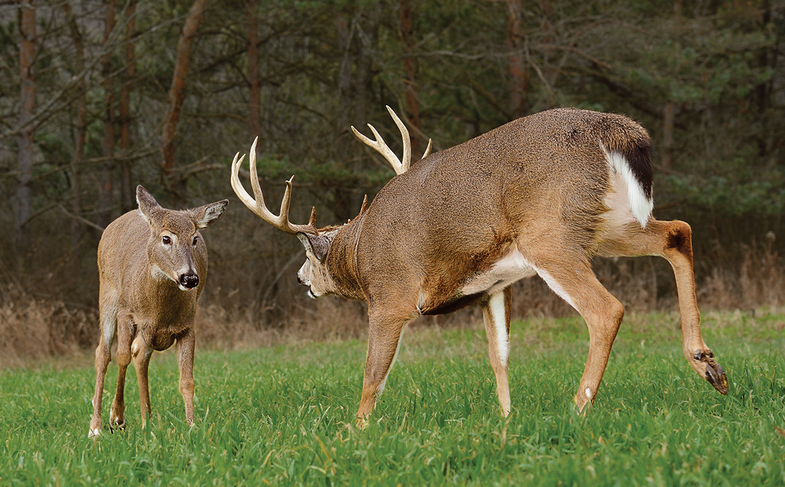 Although research confirms that the whitetail rut takes place at virtually the exact same time every year, most hunters know that the rut’s intensity varies from day to day and season to season. As much as your head spins with the mental images of scrapes, full moons, rubs, monster bucks, and rut-crazed chase scenes, the best times to be in the woods will rarely coincide with calendar anniversaries. Through years of personal experience and research gathered from other hunters, I have discovered three critical rut-­influencing elements that can help you tame the annual madness, and also help you predict what I refer to as “high-­intensity rut-hunting days” with great precision. So, let’s leave the long-range rut prognostications behind and get down to brass tacks.

Cory Wiedel is one of the most accomplished whitetail hunters I know. He has taken 11 Boone and Crockett–­class bucks in the past six years, and he places a priority on going after his scouted target bucks only when he recognizes that the conditions are favorable.

“If I don’t see a major drop in temperature combined with strong shifts in the wind patterns, I do not enter the woods,” Wiedel says. “I need to prioritize my sit opportunities with ideal conditions.

“There are certain weather-related conditions that consistently increase mature buck movement during the daytime,” he says. “My best mature buck sightings and trail cam photos have come when the temperatures are cold and there have been large variations in the wind. For example, I’ll see the same does consistently hit agricultural fields every day no matter the time of year, but there are only certain specific conditions that make the oldest bucks expose themselves in daylight.

“When these temperatures and wind patterns align, a small window of opportunity is created. That’s when I can count on bucks to reliably head for food or cruise for does during daylight instead of after dark.”

Wiedel’s observations mirror my own. My system for finding the best times to hunt is simple, and food is at the heart of the formula. Buck or doe, farm country or hills, a deer’s stomach dictates so much of its daily movements that it should be the foundation for every hunting strategy. Deer are rhythmic pattern feeders that typically browse five times during a typical 24-hour period. We can all relate: Miss a meal and we grow hungry. Of course, deer don’t share the complexities of life that cause us to miss our meals, but they are influenced by several predictable factors, which, when properly interpreted, can be used to effectively foretell the timing for your rut-hunting success. The feeding stimuli are major temperature changes, extreme weather conditions, and moon phases.

Below is the formula, and the details follow, starting with the pre-rut.

Here is how to calculate your own best rut-hunting times. (Value key comes first, directions below.)

Temperature Change
2 points for every degree of temperature drop, up to 20.
(2–40 points)

Add up your points and divide by 7 to create the expected value for your sit. These scores apply to a range that covers from the months of your summer scouting efforts to the end of the primary rut for your mature buck-hunting endeavors.

ow’s the time when testosterone levels in bucks are rising, and some does are beginning to come into estrus. The pre-rut is typified by short bursts of deer movement, often dictated by significant daily temperature changes. There’s great potential for sighting active mature bucks. You can also expect a lot of whining from fellow hunters about the dreaded October lull. Whether it takes place or not, it can be difficult to find a buck up and on his feet during daylight. You also run the very real risk of overhunting an area and blowing out a buck for good. That’s why waiting for the ideal conditions to hit your best stand makes sense.

A hunt I went on several years ago provides a classic example.

Friday, October 26, 2007, featured average daytime highs and lows for the hill country in southwestern Wisconsin. The conditions leading up to that day were anything but average. On Sunday the 21st, the temperature peaked at an unseasonably warm 74 degrees, followed by a steady progression of decreasing temperatures. Thursday topped out at 59, and after a steady onslaught of high winds, the breezes calmed down. Friday’s low was to hit 31—breaking the low for the month—-before eventually inching toward a high of 53. My hunting partner, Joe Lasak, and I were watching the weather forecast closely before making our move—a seven-hour trip to camp. We finally saw the opening.

After a 45-minute, roundabout walk to the stand and a four-hour wait on the morning of the 26th, I arrowed a mature 11-point buck as he nudged a doe and fawn out of his bedding area and across a funnel. It was the first time I had hunted the stand. Was there a little luck involved? Certainly. But by not busting the mature buck out of his core area until all the signs pointed to a high-odds hunting opportunity, we were able to seal the deal. There are a few reasons we waited to make the trek. According to my algorithm (see p. 39), we were looking at a perfect score of 10 (Moon phase: +5; temp change: +40; wind speed post front: +5; top wind speed: +10; extremes: +2; calm days: +8 = 70 points. Day value: multiply by 1. Divide by 7 = 10). It was as close as you can get to a can’t-miss opportunity that resulted in a buck that scored approximately 157.

While pre-rut monsters offer predictable bedding-to-food movements early in the day, hunting can get tricky as the rut intensifies.

The pre-rut mating ritual begins on a food plot in western New York. This 5 1/2-year-old buck checks a young doe for her readiness to breed on a late-October morning.

f course, this is everyone’s favorite time to be in a treestand. We hoard vacation days, use sick and personal time, and otherwise shirk life’s responsibilities to be in a tree. Often, it’s an all-day, every-day affair until we’re either convinced that the rut is over or that the opportunity to shoot a good buck has passed us by. In order to preserve your relationship with your family and boss—or at least avoid burning out a favorite bow stand—make sure to follow the high-value weather variables to take advantage of the best mornings, evenings, or days to capture quality opportunities for the oldest bucks in the neighborhood.

Peak-rut weather forecasts that include substantial decreases in both daytime highs and lows should immediately catch your attention. When those temperature drops are predicted to follow inclement weather—high wind and rain—it’s time to get serious. The new moon phase in November 2013 put the icing on the cake, portending a solid, high-value event for a cruising mature buck.

With a moon that was only showing 20 percent and still 10 days away from being full, the evening of Thursday, November 7, offered the potential for high early–afternoon feeding activity. Clearing skies and a sub-freezing morning low—-following three days of consistently turbulent weather—made it jackpot time for me. The proverbial stage was set for what looked like an epic peak-of-the rut hunt.

November 7 looked great on paper, and it looked even better from my bow stand. As the wind diminished after the two-day hard blow, a mature five-year-old non-typical exited his bedding area to the south and traveled along a bench to my southwest. When I first spotted him, he was 150 yards out and cruising toward a food source. It took him a while to get to me, but when he stepped to within 30 yards, and I was able to make a killing bow-shot. The giant scored approximately 160.

While the oldest bucks in the woods seem to jump to life during the peak rut, the late and post-rut are often the times to connect on a buck that has traveled out of his core area.

The post-rut can produce the opportunity of a lifetime on a long-range cruiser in search of a last receptive doe. Or it can produce many days in a treestand with barely a buck sighting. More than three weeks of solid rut activity can take its toll on even the greatest of beasts in the woods. But when the forecasted conditions are just right, even the weariest of giants seem to rise to the occasion. And when they do rise, make sure you don’t miss out on one of the last high-value sit opportunities of the season.

Although morning hours can still be productive at this time, I place a premium on stand locations that take advantage of reliable doe-family group movements from afternoon bedding areas to evening food sources. Although remnants of the primary rut still remain, they are in short supply and fading fast. Recovering mature bucks increase feeding activity to replenish energy losses before full-fledged winter kicks in, and this provides the perfect opportunity for you to take advantage of food-source stands during the afternoon hours.

Although it was just nearing the end of the primary rut in southwestern Wisconsin a couple of seasons back, the weather during the second full week of November set the table just right for an outstanding post-rut evening sit, 10 days after the November full moon.

November 16 was one of several days of bitter weather that offered a great complement to the dark, moonless evening skies during the entire week.

My friend Dave Larson was eagerly awaiting one last chance at a mature 10-point he had hoped to cross paths with during the early bow season. Significantly decreasing winds that had approached 30 mph in the late–morning hours offered an attractive set of conditions for a high-value afternoon vigil. Larson decided to sit a brush-choked ladder stand adjacent to a standing cornfield in a last-ditch effort to find a a buck in search of a receptive doe.

The plan worked—almost. Larson’s arrow found the one small branch between his stand and a post-rut 160-inch buck. The formula worked to perfection—it was the final outcome that could have used a little work.