Inspect a Deer’s Rumen To Locate the Hottest Food Sources

Fall is the time of plenty for whitetails and savvy hunters know that the key to finding fall whitetails is... 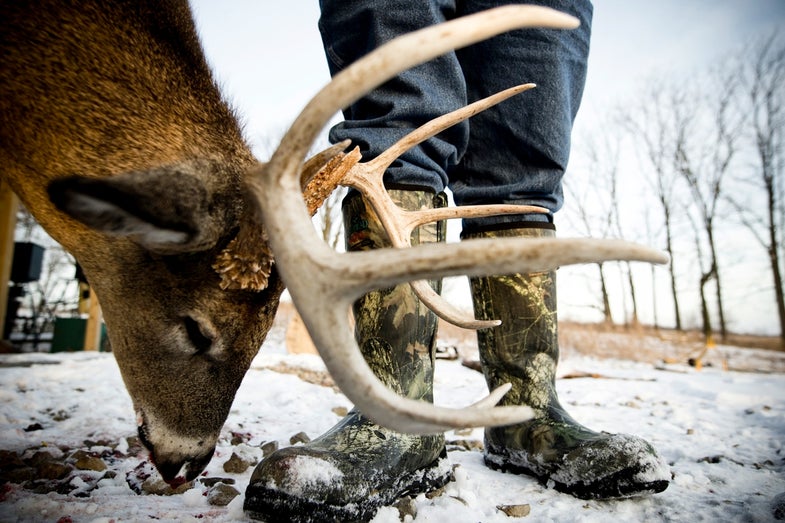 Fall is the time of plenty for whitetails and savvy hunters know that the key to finding fall whitetails is food … the right food that is. Crops are ready for harvest, food plots are lush, apples, pears, and persimmons carpet the ground and soft acorns and beechnuts are falling like rain. A deer can fill its stomach almost anywhere, and therein lies both the problem and the solution to hunting October whitetails.

A little forensic work with the deer rumen will tell you where you should be hunting.

Feeding Habits
Deer are what biologists refer to as “concentrate selectors” which means they are very selective about what they eat but, once they find something they like, they concentrate on it and tend to stay on it until its gone or something better becomes available. Whitetails typically consume about one ton of food per year or roughly 6 pounds of food in a 24-hour period. They generally feed about every 4-6 hours with feeding periods lasting from 30 minutes to 2 hours depending on time of year and availability of food. Being ruminants, they typically fill their rumen, then bed and regurgitate small amounts of food (cud) which they chew and swallow a second time. The process is referred to as rumination in the scientific community.

Rumen Forensics
Analyzing the contents of a deer’s rumen is the best and most reliable way of determining what deer are feeding on at any given time and it’s a cinch to do. The rumen is that blue-gray, watermelon sized, vein-covered organ that typically wants to flop out of the deer when you are field dressing it. It’s tucked in among the intestines and all those nasties that you are supposed to stay away from when field dressing a deer. And stay away you should until the whole mess is out of the carcass and somewhere it won’t contaminate the whole field dressing process. Once the rumen is out and isolated, it’s time to carefully open it up and inspect the contents.

We’ve found all kinds of deer foods in rumens over the years but one thing is for sure, you will know where they spent their last 12 hours when you are done. Poking around in a deer’s rumen is not as nasty as it sounds and is actually easy to do. Poke around in two or three on a Friday evening and you’ll know where to sit for the rest of the weekend. If a rumen is chock full of clover, you know where that deer has been. Loaded with apples, head for the orchard. Corn, corn, and more corn, get on it before the farmer has it all picked.

The Poor Man’s GPS Collar
Some weeks ago, the cameras we had set on food plots went cold. Where we were once shooting 2500 pictures per week, they suddenly went to 500 pictures. Where did all the deer go? Was this the infamous fall lull? Our cameras were set on food plots since late summer and the plots had been receiving all kinds of activity. Since there is no science to support the “fall lull” theory of disappearing deer, we expected that a food change was the issue. Acorns were likely the culprit as they had been dropping for the last month or so. Since our deer don’t wear GPS tracking collars we turned to the skinning shed instead. We had a couple of does hanging and sure enough, their rumens were chock full of acorn mash. As their biological label suggests they had selected acorns over food plot greens as their food of choice, and they certainly were concentrating (and concentrated) on them.

Smart hunters hunt food in the fall, but any old food won’t do. Deer are fussy eaters, they know what they want and they want it now! Hunting last week’s (or month’s) foods sources is a formula for frustration. The next time you open up a deer, do yourself a favor and have a look see at what it has been eating. You don’t have to be a forensic scientist to know the difference between a belly full of acorns and 6 pounds of corn or clover.