Hunting Dogs: How to Use the ‘Law of the Pack’ to Establish Order and Hierarchy with a Puppy

In the world of dogs, as in most other worlds, there is always a pecking order. The question is: who... 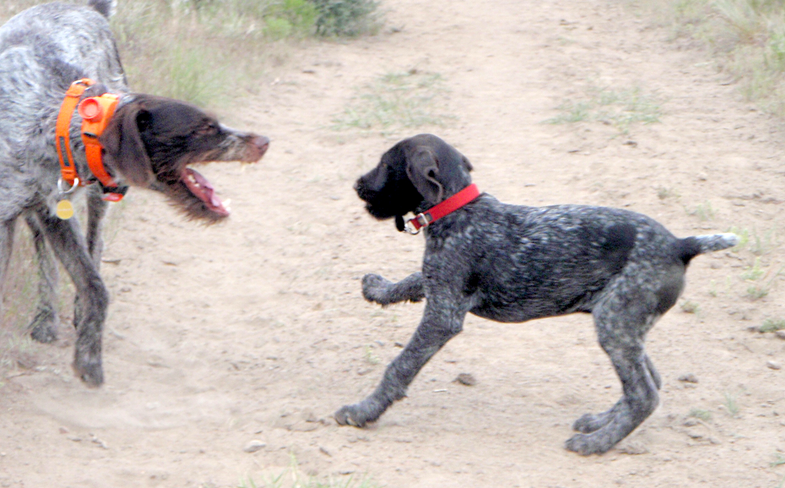 In the world of dogs, as in most other worlds, there is always a pecking order. The question is: who defines it, you or your dog?

What better time to hit the reset button, or start on the right paw with a new pup, than spring? But if you are bringing a new dog into your household, then you need to be aware that it will require a reordering of the hierarchy between your dogs, and between you and your dogs. Here are some tips on asserting yourself, while helping your pup fit the pack dynamic.

All animals, from humans to dogs to cockroaches, function under a “law of the pack.” In so-called advanced societies, it may not go by that name nor be that obvious, but there is always a leader and a hierarchy among all the rest, the subordinates.
Not honoring this order can cause a mess of trouble when it comes to you and your dogs. I learned this lesson the hard way, with two dogs that eventually decided the matter with a fang-and-claw debate.

You can orchestrate the situation from Day One and nip disaster in the bud. Overtly or covertly, you will probably have to stage-manage the human-dog-dog hierarchy throughout your dogs’ lives. Sometimes, it’s easy. Other times, not so much.

“Dominance” doesn’t have to mean you physically lord it over your dog(s), or kick, hit or physically assault your hunting partner. It is as much psychology as anything else. We are supposed to be smarter than our dog, right? But even mind games sometimes require a little physicality. (Emphasis on “little.”)
It starts in the litter. Behaviorist Ed Bailey insists a puppy learns how to “get along”—when to give and when to get—in the last crucial weeks before you pick him up as long as you don’t take him home until the tenth week. Those last three weeks stretching beyond the traditional 49th going-home day are the pup’s finishing school when it comes to getting along with other dogs and ultimately, with people. I’ll let you and your breeder have that discussion about when you should pick up your pup.

Once he’s a member of your family, pup needs to know he is not in charge. Ever. Whining and crying are his principal weapons, and he will use them to train you. If you’re not careful, you will be getting up when he wants out, filling bowls when he wants food, subconsciously petting or jumping off the couch when he craves attention.

If there are other dogs or humans in the house, the newcomer must understand his place on the totem pole: rock bottom.

Horses, dogs, humans, chickens. They all function best and are happiest when they know where they stand, literally and in the pecking order (yep, that’s where the term came from—chickens’ flock dynamics). When you—or the new pup—upset the relationship apple cart, you spill more than fruit.

Some clear indications a dog is trying to get a leg up, so to speak, include: charging out the door before you or more senior dogs, sitting or standing on your foot, laying a head on your knee or his foot on your foot, lying on the couch or chair – especially in your spot. With two dogs, the wannabe dominant one will try to get between you and the other dog, or physically above it (on the couch, while the other dog lies on the floor, for instance).

Be strong, and insist that everyone else in the family resist the urge to give in to a cute puppy’s whims. Give your more senior dogs their due, and maintain psychological reign over all of them, in hierarchical order. Feed, exercise, release to the yard, train, indulge them in that order.

Cuddly little puppies are smarter than they look. They aren’t manipulative, just acting on their natural urges to become the top dog, and ultimately, sire the next generation in their pack. If you persevere and maintain your own leadership status, eventually your dog(s) will accept their role and everyone will get along just fine.

Again, heed my experience: once housebroken, out-of-the-crate time is your decision, not his. He’ll soon adjust to your timetable. Physically subordinate pup to you, family members, and other dogs. My old guy gets to share the couch with me at coffee time. The young one doesn’t. He gets the spot at my feet while I gag down a mug of joe.

Young One gets fed last, let in and out of the house after Old Guy, and even trained after Old Guy. When I hunt, Old Guy gets the first “up,” and Young One is expected to wait patiently for his shift. If Young One comes over for scratches and pats, wheedling his way between Old Guy and me, he’s pushed away. His place is outside the inner circle.

Yes, it’s hard, parceling out attention and affection according to a hierarchy, rather than a “democracy.” But a dog that knows his place in the pack functions more comfortably, and ultimately is a better hunting partner and pet.