Sandra Smith is a FOX Business Network reporter and a co-host of FOX News Channel’s Outnumbered. She also happens to... 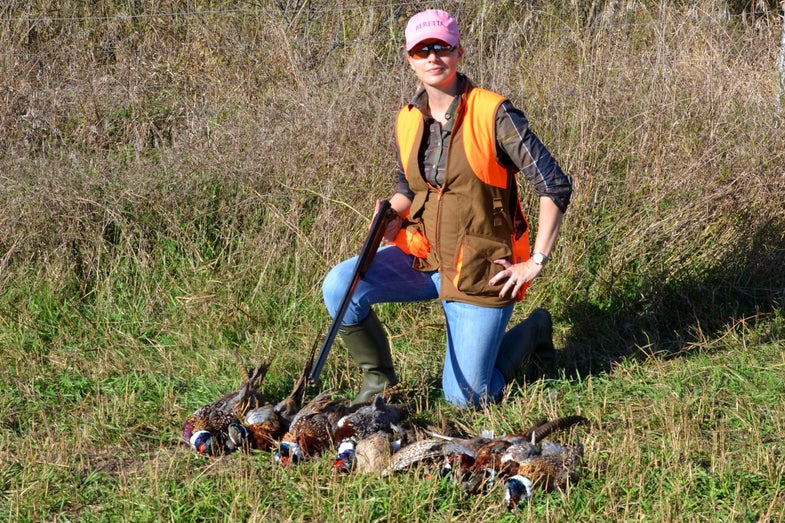 Sandra Smith is a FOX Business Network reporter and a co-host of FOX News Channel’s Outnumbered. She also happens to be an avid grouse and pheasant hunter, a mom, and a resident of the Big Apple.

Outdoor Life: How do you balance your career as a New York City news anchor with your passion for hunting?
Sandra Smith: Balance is the key word there, because it’s difficult to find a good place to hunt when you live in the city. Fortunately, I have access to farmland in upper Wisconsin—I’m originally from Chicago, and so is my husband. A lot of the original hunting that I did was in Wisconsin, just north of the state line. In New York it’s a bit more of a struggle.

OL: How did you get into hunting?
SS: For me, my love of nature, land, and conservationism all started as a kid. I would even get bird watching books as birthday presents. Then, one of my first dates with my now-husband, he took me skeet shooting. It was just a natural progression for me to begin hunting. He taught me the circle of life, and exposed me to beautiful land and beautiful hunting dogs. It was the most amazing experience.

OL: So I’m guessing you’re big into bird hunting then?
SS: Yes, I’m primarily an upland bird hunter. I’m not particularly keen on deer hunting, but my husband and I are totally into pheasant hunting. It’s our thing.

OL: Okay, why birds?
SS: Well there are the dogs. They’re so inspiring, and the intuitiveness of a gun dog is admirable. They’re one of my favorite parts of hunting. And, going back to hunting in general, my other favorite part is my love of the land and conservationism. My husband and I are big fans of Aldo Leopold. “A Sand County Almanac” is a book I think everyone should read.

OL: You recently acquired a gun dog. Tell us about him.
SS: He’s a German shorthaired pointer named Whiskey. We researched where we were going to get the dog for several years before we found a champion blood line out of Reno, Nevada. We were looking for a spectacular gun dog, but also wanted a shorthaired that was bred a little smaller. We got in on the litter, and he was the only male out of all the pups. So far, so good. He’s still a puppy, but we’re looking for him to be the boss pretty soon.

OL: As a hunter living in Manhattan, I bet you run into anti-hunters now and then. How do you handle that?
SS: I always see it as a friendly challenge. I think people who spark a debate against hunting often don’t understand it. They see it as people holding guns and going out just to kill. They don’t see what it takes to care for the land and what it takes to attract these animals and maintain the habitat. They don’t really understand that hunters are conservationists, and that we have a responsibility to the land on which we hunt. There are a lot of New Yorkers who are all about the farm-to-table movement, but they’ve never actually gone out into the field and seen what it takes to bring that game to the table. When anybody challenges me as a hunter, I see it as an opportunity to educate them.

OL: Are they receptive to that?
SS: People are always very receptive. Some say they will never kill an animal—and that’s fine and I respect their decision. But that doesn’t stop me from educating them about why we hunt and why it’s important.

OL: How often do you get out of the city to hunt?
SS: Well, so I’m nine months pregnant [at the time of interview], and this is my second child. We also have the young puppy—that’s a lot on our plate right now. So the amount of hunting I would like to do is far greater than what I can realistically achieve. It’s not exactly great to go out in the field while you’re nine months pregnant. So I will be back at it in the spring. I love skeet shooting, and it’ll be good to get out for some target practice.

OL: What kind of obstacles, if any, have you encountered as a female hunter?
SS: Let me give you a little bit more of my background to put that question in context. I was originally a business journalist and I started out as a kid on the commodities trading floor in Chicago. My dad took me out on the floor and exposed me to that “man’s world.” He expected the same from me as anybody else, and I really learned to handle myself quite well in that environment.

So, apply that to the hunting world, which is also dominated by men. I find hunters to be overwhelmingly gracious, wonderful people. So when I say this, I say this as the exception. But some men will challenge a woman in the field, and say, “Oh, she can’t possibly be a good shot.” But those people are like that in the rest of their daily lives, not just when they hunt.

OL: What’s your take on pink hunting gear?
SS: I’m all about adding a little flare to my hunting gear, but I’m practical. I’m first and foremost utilitarian about dressing myself for the field, and I’m not sure how pink plays into it. My take is that manufacturers have learned to market to women and become very profitable from it. Is it for me? No.

OL: What am I forgetting?
SS: I’m a great shot. You forgot to ask about that.