Lessons in Patience and Hardship from Hunting My 10th Ram

Every sheep hunt I have been on has been an adventure of its own. This year, however, has been particularly... 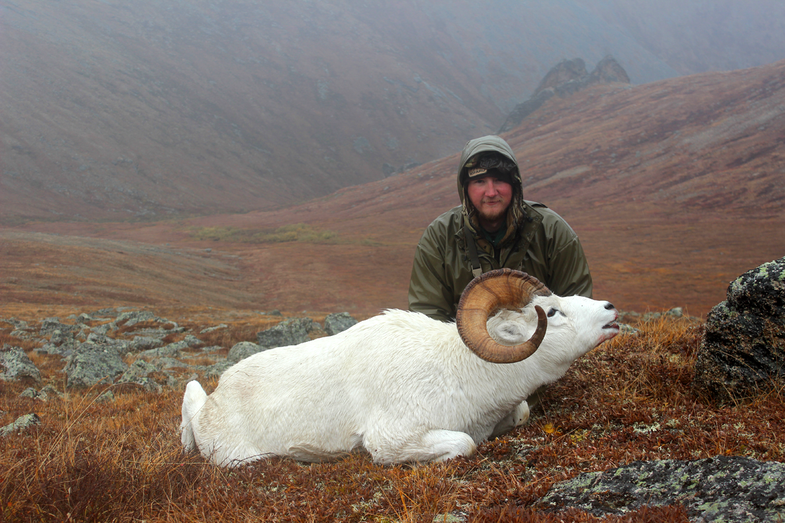 Every sheep hunt I have been on has been an adventure of its own. This year, however, has been particularly special. After helping my buddy Frank to fill his draw tag on the opener, I was left with my sheep tag to notch, and a rapidly vanishing season in which to do it. Knowing time was limited, I took a weekend to do a kamikaze trip, but was unsuccessful. I had only one more shot, and despite being busy at work, had to take it if I wanted to accomplish my goal of taking ten Dall rams before I turn 30 years old.

So in early September, with a decent weather window ahead of us, Frank and I headed back into the area I went two weekends earlier (you can watch him take his own ram here). Feet mostly healed up, we shouldered our packs, loaded with enough food for 10 days, and determined that if we were coming back without a ram, out stomachs would be empty as well. We covered about six miles the first afternoon and woke up to a herd of caribou less than 200 yards from the tent, including one huge bull. The caribou were fair game, but that’s one way to end a sheep hunt before it begins, so we just enjoyed watching them. 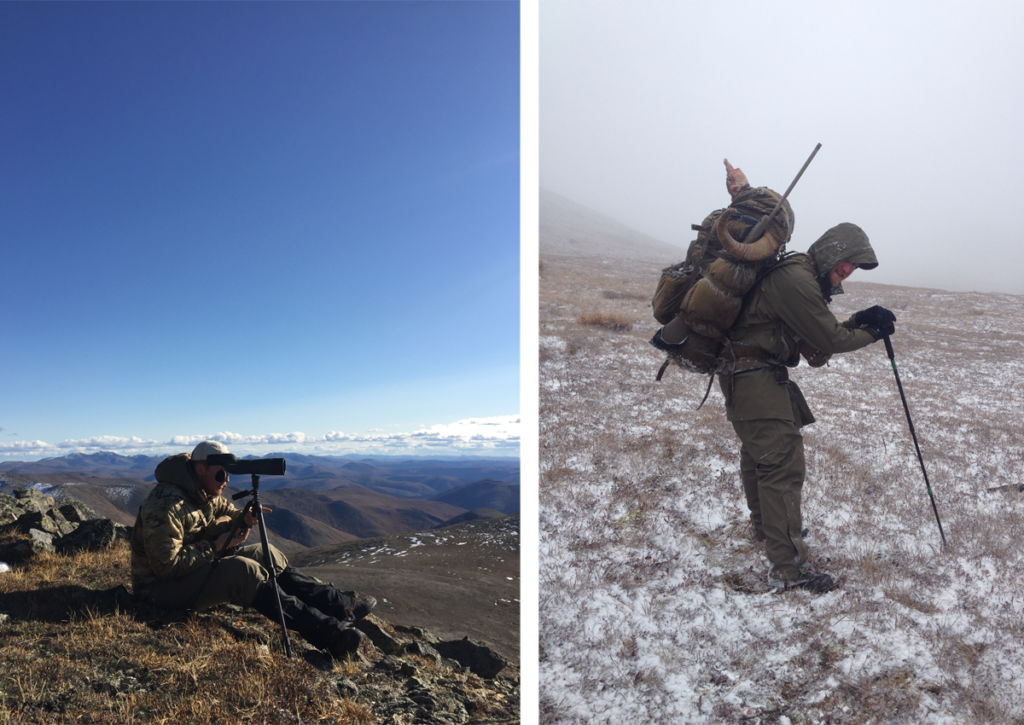 By that evening, we had made it to where I woke up under six inches of wet snow just two weeks before. This time the weather was looking great and we were already seeing some rams. We didn’t see anything legal, but I was feeling good about my prospects as we watched a beautiful sunset.

We spent the entirety of the following day looking over a few groups of rams, but were still not able to locate a legal one. As we made our way back to camp, we were sitting on a ridge glassing a new basin, when Frank stood up to stretch and spotted a band of six rams that we hadn’t seen and were bedded about 800 yards below us. One ram looked like he had the mass I was looking for, but with the sun hitting the cool ground, the mirage was so bad that it was impossible to judge him. We began to work closer, but had to be careful as the wind was blowing straight downhill. Before I got a good look, the ram disappeared into a cut below the smaller rams as they were feeding. We waited, then as we were rapidly losing light, and the rams were feeding closer and closer up to our elevation, we decided that we needed to push it and get a look at him. We quickly found ourselves pinned down when two of the smaller rams bedded down just 200 yards to our left. The bigger ram just wouldn’t show himself. I stood up and saw the other three young rams only 70 yards below us, but still couldn’t find the big one. Finally as it began to get dark, we decided we needed to try and slip back to our packs. While we did that, we found the big one, who had gone the opposite way we thought, and when he busted us, the whole band took off running out of sight. We made the walk of shame back to camp a little dejected, but knowing we still had time. 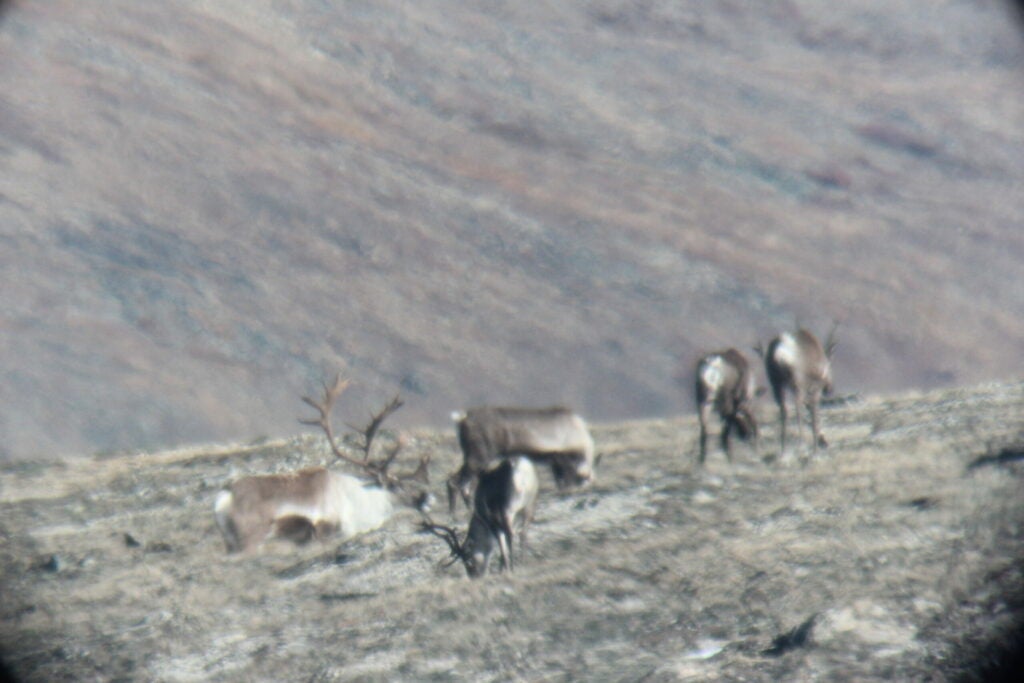 The next day, we checked out a couple groups of rams, but were still coming up without any great options. But that afternoon we found the group of six that we had spooked, hanging out about a mile and a half away, relaxed and feeding. We were able to determine that the bigger ram was legal, but was too late in the day to execute a stalk, so we let them bed down and found them nearby the next morning. We decided to pack up camp and go after him, and as we began the long stalk, the rams fed across the basin they were in to a position below us. Good enough, we thought, but no sooner had they gone out of sight below us, then they went running back across the basin. I knew they had not seen or winded us, but then I saw a herd of caribou that had fed over the ridge above them and spooked them.

The sheep didn’t go far, but the caribou decided to bed down for the whole afternoon right where we needed to go to continue the stalk, so we aborted our mission. The following morning, the rams followed the same pattern and fed down below us again. As we were descending to a shooting position, the biggest ram decided he wanted to be back on the other side, feeding to where they had been the day before. The others followed, and we were pinned down in the open for several hours until we had a chance to get out of sight. Welcome to sheep hunting; even the best plans can get derailed, and you never know quite what causes it.

Daylight was quickly disappearing, and heavy rain was on the way, so we decided it would be best to be patient and try again the next day. 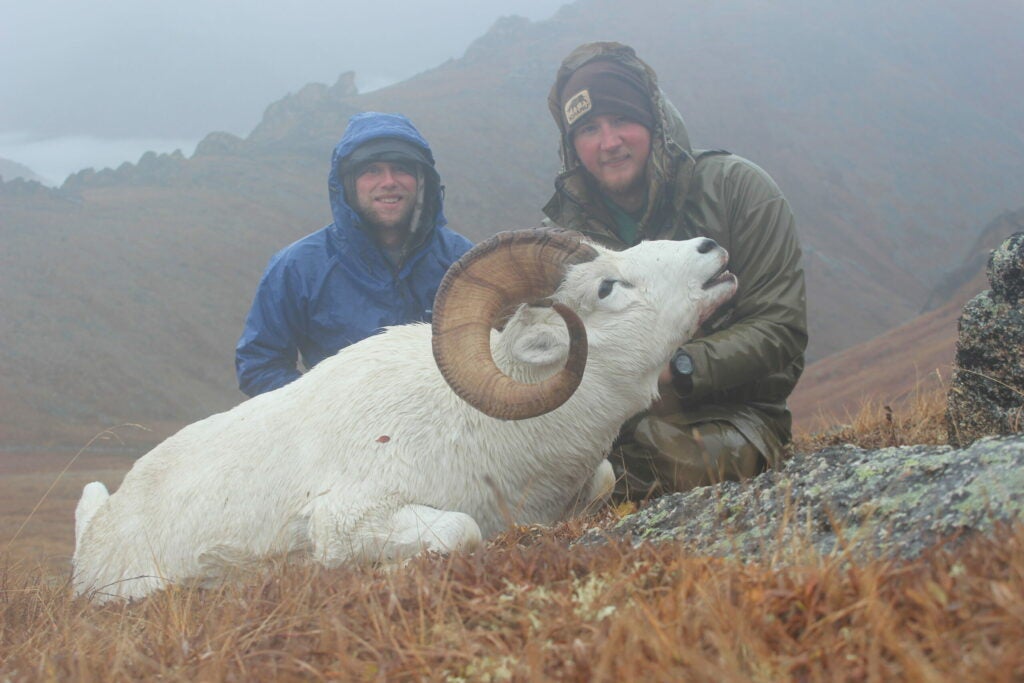 One big lesson I learned on this hunt was that patience really does pay off. The following morning, we got an especially early start and at first light found that the rams had moved even closer to us during the storm and were bedded in the basin below our tent. We quickly got our gear together and as we picked our way through the rocks to get in position, the rams began feeding up towards us. There was one rock in particular that we were able to use as cover to get close, and when we peeked over, saw that they were only 300 yards away. It took a few minutes for the big ram to separate himself from the herd, and the rest happened really fast. I put a round in the chamber and quickly took a rest on top of the rock. We had to skyline ourselves and it didn’t take him long to see us. Unfortunately for him it was too late, and I was able to anchor him with one shot. 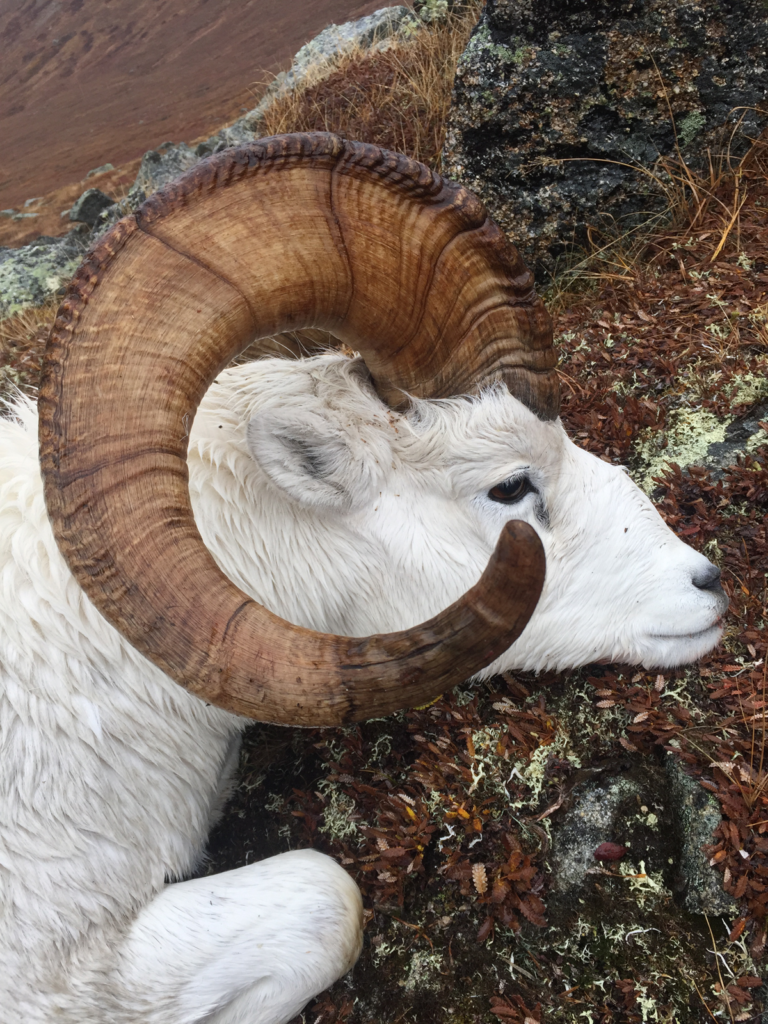 When he hit the ground, a surge of emotion and relief hit me. Much like an 18-wheeler letting off the brake pressure, all of the stress and angst that had been building up all went away in an instant. It was hard to believe that my tenth ram was on the ground. Finally able to put my hands on those horns, he was quite a bit more impressive than I had thought. He was a classic Dall, with a wide flair and heavy horns. In my never-ending pursuit to be a sheep hunter, every ram has taught me a lesson, and this one was patience.

We managed to pack the sheep 15 miles just in the nick of time. The final day was an unrelenting blizzard, freezing our rain gear and water bottles solid. After 23 days spent in the mountains, over 140 mountain miles walked, and about 20 pounds lost, I was left with one lingering thought from this season of education: I have never wanted a bacon cheeseburger so bad!