How I Made the Most Important Bowhunting Shot of My Life

The author waited 19 years to draw a Colorado bighorn sheep tag. When he finally drew, his dream hunt boiled down to a single heart-pounding shot 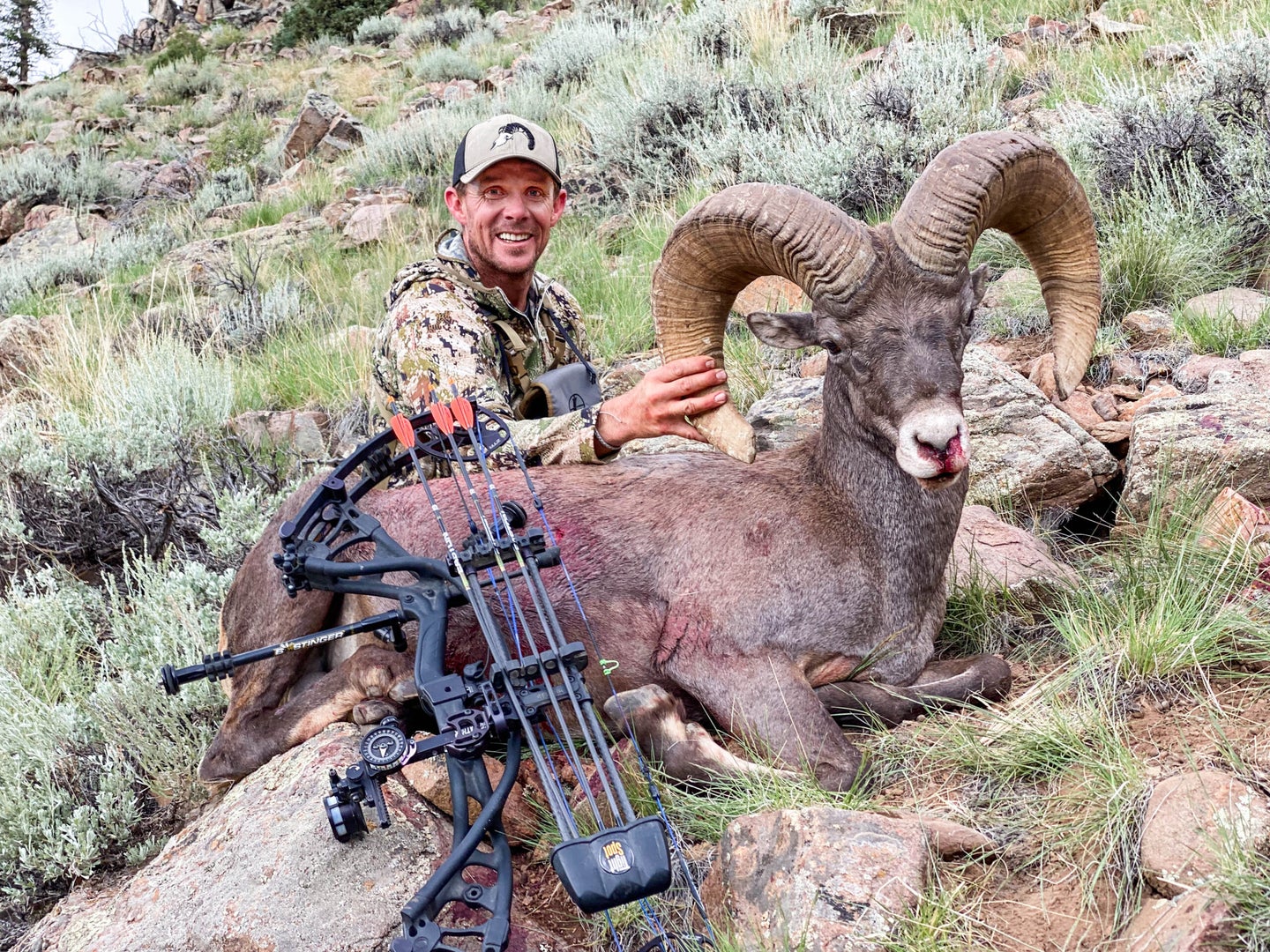 I consider myself a pretty good shot with a bow. I shoot almost every day of the year and I’m a stickler about the accessories I slap on my rig. I tune and tinker until fletched and bare shafts punch perfect holes through paper. Like many of you reading this, however, I’ve still blown shots more than I care to admit. Luckily, in bowhunting, we tend to get the chance to redeem ourselves if we stay the course. Hunt hard and smart, and often you’ll be rewarded, though never with a guarantee. Another opportunity to tag a deer may come that season, or at the very worst, the following year.

That wasn’t going to be the case with this hunt. In May 2021, after 19 consecutive years of putting my name in the hat, I drew a once-in-a-lifetime tag for a Rocky Mountain bighorn sheep in Colorado. Getting a single opportunity on a good ram within bow range would be hard enough. There would be no room for error. There would be no chance to hunt bighorn again the following year if I screwed this up. I needed one opportunity and one good arrow, and I needed to make them both count.

Pre-Season Bowhunting Prep Is All About Repetition

Going into summer, my bow was tuned and dialed as it always is. My sight tape was perfect out to 112 yards, and any tweaks that needed to be made had been made. Now my focus shifted to purposeful shooting. Let me explain.

There is a difference between slinging arrow after arrow and shooting purposeful ones. Every single shot you take—in a tournament, on the range, or practicing in the backyard—should be executed to the best of your ability. Hundreds of arrows a day won’t make you any better if you’re not purposeful about your approach. Making a shot on a big-game animal is hard. The nerves will always be there. And therein lies the secret to not letting them screw up your shot. Those bowhunters who learn to embrace those nerves can go through a perfect shot process by letting muscle memory take over and letting their release fire the bow. Once you can do this, you’ll become a lung puncher.

To get to that place myself in the challenging landscape of sheep country, I spent days just working on my grip—getting my palm situated time and time again to make sure torque wasn’t going to be an issue. I kept a shooting journal, much like runners and weightlifters keep workout journals. At each day’s end, I would record what went well and what needed work. I spent countless hours settling into my grip, acquiring a target, and crawling into a repeatable two-point anchor. Repeatable is the key word there: If your anchor isn’t consistent, you’ll never be as accurate as you could be.

My two-part anchor is the tip of my string on the tip of my nose, and the space between my ring finger knuckle and middle finger knuckle tucked on my jawline. I went as far as taking some black camo face paint and coating the spot on my face. After multiple shots at multiple ranges, I evaluated where the black marks were on my jawline. If I had done my job, there were only two dots centered in one location. If my jawline was dotted in different areas, my anchor wasn’t perfect. This is just one of the minute details that bowhunters often overlook.

Sometimes, for days at a time, I didn’t fire a single arrow. Instead, I would go through my shot process and let my pin float on a blank face target. With no dot or spot to aim for, I learned to trust my pin float.

Not wanting to spare any detail, I also ordered a 3-D bighorn target. I wanted to study realistic vitals and get used to putting purposeful arrow after purposeful arrow in the target’s vitals. I also spent a great deal of time shooting the target at different angles. Broadside shots on game aren’t a guarantee, and I wanted to be able to place my arrows precisely where they needed to be when shooting at quartering angles.

I shot distances both close and far, but once comfortable with my shot routine—letting my release fire the bow—most of my daily arrows were shot at distances between 70 and 100 yards. I had zero intention of shooting a sheep at such a long range, but I am a big believer in long-distance practice. When you can put arrows in a target’s vitals from distances that are double and triple the length of your maximum hunt distance, the better archer you’ll become.

Practice Shooting in the Terrain Where You’ll Be Hunting

For this hunt, I made multiple scouting trips. And I made it a point to bring a target with me on each scouting foray. Why? I wanted to check my sight tape at the elevation I’d be hunting. The air is a tad thinner in the sheep mountains than on my home turf, which put me just a touch high at distances between 45 and 112 yards. So, I made sight tape adjustments to remedy this.

Each time I went up the hill to scout sheep, I took my bow and target with me. I wanted to shoot at extreme angles to double-check my bow’s third axis setting. If your third axis is off, you can miss or wound an animal badly when shooting up and downhill angles. Not to mention, I wanted to confirm my rangefinder’s angle compensation ability. There’s a difference between line of sight and true ballistic range, and you need to check your rangefinder against your sight tape regularly. Plus, shooting in the terrain I’d be hunting—executing perfect shots in steep landscapes—filled me with extra confidence ahead of the hunt.

In the day’s leading up to the hunt, I would only fire one or two good arrows each day. Just like running too much before a big race, you can do too much before a big hunt. Keeping your confidence levels up and not over-thinking things is critical. At this point, the hay is in the barn or it isn’t. If you’ve done your work, you know that it is. And the last thing you want is to stray off course and start making unnecessary last-minute changes to your bow or your form.

Executing on an Important Bowhunting Shot

I earned my opportunity. It happened on the third evening of my hunt. After a two-mile stalk, I’d worked my way to 96 yards from a bedded ram. He was a young 5/8 curl with great potential, but not a shooter. I knew there were three shooters in the band, and they were bedded in a location I couldn’t see. My only hope was that when the sheep got up and started to feed across the mountainside, they would feed in my direction.

After an hour and a half, the younger ram jumped off his boulder perch toward me. Seconds later, the three larger rams I had been hoping to see emerged and followed suit. I was seconds from sending a single stick of carbon through the air.

Read Next: The Best Whitetail Bowhunters Are Still Limiting Themselves to 40 Yards

The shot was tricky: The downhill angle was steep—greater than 40 degrees—and the angle compensated distance on my rangefinder said 64.5 yards. I was beyond nervous now—I was terrified. But those months of purposeful practice to execute this exact shot, time and time again, sent me into autopilot. I got into my grip, acquired my target, crawled into my two-point anchor, bent at the waist, bubbled over, and let my release fire the bow. The result was a 12-ring shot. The arrow entered high in the ram’s left-side lung and dumped out low on his right-side lung. He didn’t make it 40 yards.

Of course, I’m proud of the animal. He’s a giant, and this once-in-a-lifetime adventure will be one my bowhunting mind calls on often. What I was most proud of, however, was my execution. No stone had been left unturned during my months and months of practicing. If you go into every hunt—once in a lifetime or every season deer tag with this type of mindset—you’ll make a heck of a lot more positive memories.