Steve Jones and Linda Powell have hunted all over the world. Here are some of their secrets to killing quality bucks 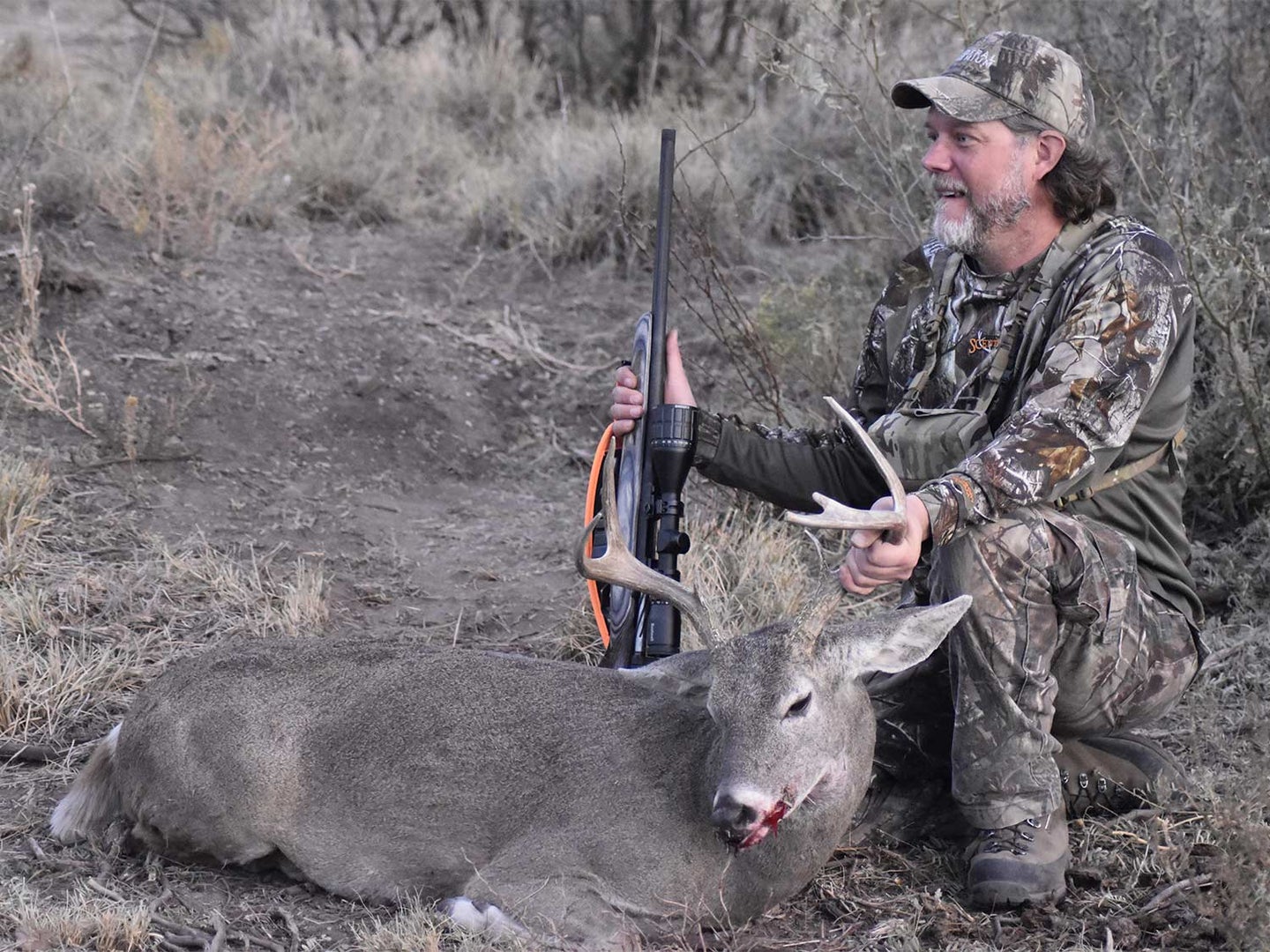 Mike Holm of Federal Premium took this buck on the final night of the hunt. Joe Genzel
SHARE

Most of my whitetail hunting has been limited to treestand sitting, but this fall I traveled to West Texas with Mossberg’s Linda Powell to hunt bucks among the sand and cedars of the Davis Mountains, close to the U.S.-Mexican border. It’s rugged country: dry and desolate, where no Midwestern whitetail would care to live. You have to be one tough-ass buck to survive here.

During our week in camp, I spent most of the time in the passenger seat of a rusty 1985 Dodge Power Ram, soaking up knowledge from our outfitter Steve Jones of Backcountry Hunts and Linda, who is one of the best hunt-camp hosts around. Going on three decades, she had picked guides that can not only put clients on animals, but teach them a bundle (if they are willing to listen). Both Steve and Linda have hunted the world over for more species than I can count, and their knowledge shows. (In fact, I think Linda has completed more world turkey slams than I have killed gobblers.) The point is, they both have a lot of experience, which helped me kill a buck on the first morning. I spent the rest of the week with my eyes and ears open. Here’s what I learned.

You will see this concept pop up many times throughout this story, because it’s key to killing mature deer. On the first morning of the hunt, Linda, Steve, and I were into whitetails almost as soon as the old Dodge rumbled onto the ranch. Right off the bat we spotted a decent buck, though he wasn’t a shooter in those first five minutes of the hunt. A few minutes later, we saw two more good deer. They were browsing in a bottom that funneled into a draw with mountains on both sides. In this part of Texas, the desert isn’t barren. It may be dry, but there’s still enough vegetation to make things challenging. The two deer kept appearing in the scrub and disappearing behind small cedar trees. We pursued them for a while, but only succeeded in pushing both bucks farther and farther away.

To keep from spooking them away entirely, Steve backed out of the bottom and we parked on a hilltop to glass. It was likely both bucks had not scampered off into the hills yet, and were still holding tight in the brush below, where they seemed most comfortable. There was plenty of cover, water tanks, and a natural food source nearby—all indicators that the bucks were not going to stray far.

After about 20 minutes and a quick consensus that the bucks were probably still around, we hopped back in the truck and headed in, driving the bulldozed roads in search of the same deer. It was only a few minutes when the two bucks appeared in a thicket. The bigger of the two went to the right, deeper into the brush. But for some reason his buddy decided to step into a dry river bed in the open. And since I’m not overly choosy about rack size, I flicked the safety on the new Mossberg Patriot LR Hunter, and connected on an easy 70-yard shot.

Had we kept pushing those bucks hard, they would have bolted. Texas deer are pretty used to truck traffic, but they will only tolerate so much of it before you completely blow them out. The takeaway? If you’re on hunt and the deer aren’t cooperating, don’t bulldog your way onto their turf. Take a few minutes and think about how your next move will influence the deer. Charge in, and you may never see them again. Stay patient, and the deer are more likely to make a mistake.

Back at camp, Linda and I got to talking about our quick hunt, and we broached the subject of picking the right time to shoot your animal. I had had a few chances to make marginal shots on the bigger of the two deer before ultimately killing the smaller one. Since she has hunted with all manner of folks—from super-aggressive personalities to laid-back ones—she offered some pretty smart advice. The first tip—and I have written about this before—is that you should never shoot an animal because someone tells you to. For example, if a guide or buddy tells you to shoot a deer off-hand because it’s so darn close, but you would rather lay prone and shoot that way for better accuracy, then get on the ground and shoot. You should always look to connect as much of your body with a hard surface as possible, because that offers the most stability. Sometimes that’s not possible, but you should try. Remember: the best shooters get themselves in the best positions before they shoot.

Also consider, that when you pull the trigger, you cannot take it back. So you need to be supremely confident, no matter what the folks around you without a rifle in their hands are telling you to do. Something else to think about: If you aren’t sure about the shot, but take it, and miss, the likelihood of getting a second opportunity shrinks substantially. It’s better to err on the side of caution and wait until the deer offers a better opportunity, even if that’s a day or two later. Again, don’t rush into it. Time is on your side (unless it’s the last evening of rifle season), and the more chances you give a buck to slip up, the more likely he will.

Read Next: Hunting Whitetails in the West Requires Stalking Skills and an Active Imagination

After I tagged out, Linda was up, but the three of us struggled to find whitetails on many of our morning and afternoon drives. Steve had mostly been focusing on big flats on hilltops where he thought deer would be feeding and watering. We saw a lot of mule deer at higher elevations, but not whitetails. So on the third day, he switched it up and we started focusing on river beds. Just like that, we were in the deer. The whitetails were watering in small pockets of the mostly dry rivers, and bedding in the shade of tall cottonwood trees.

Too often we can get hung up on going back to the same places, because that’s where deer were hanging out in the past. Or maybe you killed a good buck in one spot, and think lightning will strike twice. But the fact is, if you aren’t open to hunting different areas that deer frequent, you’re going to have trouble punching a tag. This applies to Midwest and Eastern whitetail hunters as well. If bucks aren’t coming to your food plot, find a travel route or get closer to a bedding area without bumping the deer. As seasons and conditions change, bucks are going to change their habits, and you need to adapt accordingly.

I know I said you should choose a shooting position with as much hard-surface contact as possible, but sometimes it’s not possible. If you hunt whitetails long enough, you’ll eventually jump a good deer in cover, which requires a quick shot. You won’t have the time to get the rifle on a good rest, so your best option is to practice shooting off-hand before you find yourself in this situation. Linda told me before our trip that some of the shots could be close (mine certainly was) while making a stalk. None of us in camp had to take an off-hand shot, but most of the kills were made under 100 yards—so the chances were high it could have been a possibility. I did prepare by taking several standing shots and dry-firing on targets at 25 yards. I don’t feel confident taking an off-hand shot at distances much further than that, but you can find out your own accuracy and effective range with a little practice.

The key is to have your riflescope at its lowest magnification so you can quickly acquire the deer in the crosshairs. Dialing your scope up to 18 power is going to make it nearly impossible to locate deer quickly. When you practice, keep the gun on the lowest power, throw it to your shoulder, and shoot. Don’t stand there for seconds on end, trying to aim. You won’t have that kind of time when a deer busts from a thicket of cedars.

One afternoon while we were driving, Steve spotted a mule deer shed in the dirt from 150 yards away. You could only see the very tip of the shed, but he hit the brakes on the old Dodge so quickly, I had to brace myself on the dash to keep from going through the windshield. I wanted to know how I could get that good at picking a piece of bone out in the wide open of the Texas desert. But when I asked Steve how he saw that antler, he just smiled. “Oh,” Steve said, “just spend your entire life hunting.”

A big mistake hunters make is that they stop paying attention to deer after they tag out. You need to keep hunting, scouting, and finding deer. I learned this lesson by spending five more days trying to spot whitetails and mule deer on a 300,000-acre ranch after killing my buck. As an Illinois hunter, I know where I’m supposed look for deer: Field edges early in the morning or late in the evening, along trails, and at my uncle’s “secret spot” on top of a ridge that he thinks no one else at camp knows about (but everyone does).

In West Texas—or any kind of big country—it’s much more difficult. You should spend as much time looking for deer as you can, even if you kill one early on in the hunt. The first three whitetails I saw were no more than 200 yards away. Pretty easy to spot. But in many cases, you’re going to have to pick out a buck in the brush at much longer distances. Continuing to look for deer and helping your buddies fill their tags will help you find deer faster on future trips. You’ll be more familiar with their habitat and their habits, making you a better hunter.