Upland Hunting: Why You and Your Gun Dog Shouldn’t Be Deterred by Crappy Conditions

As I huffed and puffed my way to the top of a lone, rocky butte in northern Nevada, my wirehair... 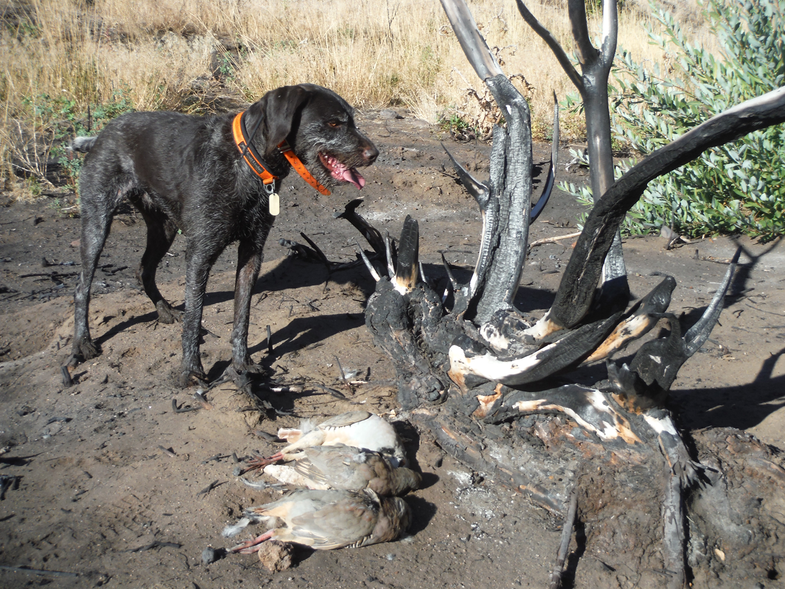 As I huffed and puffed my way to the top of a lone, rocky butte in northern Nevada, my wirehair Manny slammed a point. Tail quivering, nostrils flaring, his bugged-out eyes followed my move to the base of a lava outcropping where a cloud of valley quail scattered in all directions.

It wasn’t what I was expecting—this was chukar country after all—but most surprising wasn’t the species that flushed, but the fact that the entire butte, excepting those giant volcanic boulders, was cloaked in two feet of snow.

It was the most recent lesson involving unlikely habitats, many we simply drive past, written off for one reason or another. Whether it’s “natural” disaster, weather, or even past experience that crosses spots off our list, maybe it’s time to re-think our tried-and-true rules. Here are five examples:

1. I opened the season in my go-to canyon. Unfortunately, a devastating prairie fire had blackened the walls from the summit to the slim band of riparian area on each side of a gurgling stream. When I couldn’t find Manny, I pulled out the GPS. Before I could hit the “dog” button, chukars rattled their way through the streamside willow thicket, rocketing downstream. One fell to my snap shot, cuing another covey to launch from the next bend upstream. Fortunately, the slow learner in that bunch came my way, and soon Manny was delivering both to hand.

2. A 100-year-old hardwood shelterbelt in northeast South Dakota resembled a Louisiana bayou, four inches of water covering the rich black soil. But that’s where the dogs found every ringneck – splashing ahead of the Labs, battling the gnarled branches as their wake subsided. With nowhere else to hide, they were willing to risk wet feet rather than the hordes of orange-clad pursuers in the adjacent fields.

3. Deep in a Nevada range we slogged our way across a bleak, featureless snowfield toward the next draw. That small fold in the landscape offered protection from the howling wind, some bare ground, and we hoped, some chukars. Before we could get 25 yards into the football-field-sized expanse, a covey ran across what would have been the 50-yard line, well ahead of our dogs and our guns. We found others in similar locations, hunkered on a foot of snow they couldn’t possibly scratch through for feed.

4. A drenching rain forced us to shelter under an overhanging cliff in southeast Oregon. Dave’s pocket rocket Missy (half beagle/half Lab) didn’t cotton to our wimpiness, continuing to course the muddy slope below us in the maelstrom until chukars burst into the air. The stunted sage offered no shelter from the storm for them…were they traveling to better digs?

5. We once slogged our way up a desert canyon gray with ash from a range fire. Only the crated dogs’ frantic behavior clued us in to the chukars scattering like, well, ashes in the wind. We were out of the truck in record time, dogs so scent-drunk it was more like a Keystone Kops episode than a hunt. Only when the dogs were finally corralled could we kneel to find the tiny green shoots of cheatgrass thriving in the nitrogen-rich soil. That’s what was in the crop of every bird we shot.

Every season, I add another example to my mental checklist of upland birds and habitat anomalies. I well remember sitting in a crossroads bar as the old timer in all seriousness muttered “birds are where you find them,” chuckling to myself at his naïveté’. That well-worn boot is now on the other foot.

So I guess this little story could be boiled down to a few simple lessons:

2. If there’s food, water, or roosting cover at some point, there is also a chance birds will visit, at least temporarily.

3. Hunting or predator pressure will sometimes drive birds to territory they would normally shirk.

4. In early season, water trumps almost every other factor. Find a stream, stock tank or pond and it can become a bird magnet when temperatures skyrocket.

Think hard and long enough, and I’ll bet you can recall a similar experience. The pro guides, local yokels, books, videos and seminars will put you in the right place 90 percent of the time. But that other ten percent? Those birds are where you find them.