The Toughest Grouse Hunts are Always Worth It

From prairies to forests, these are the toughest hunts in the uplands 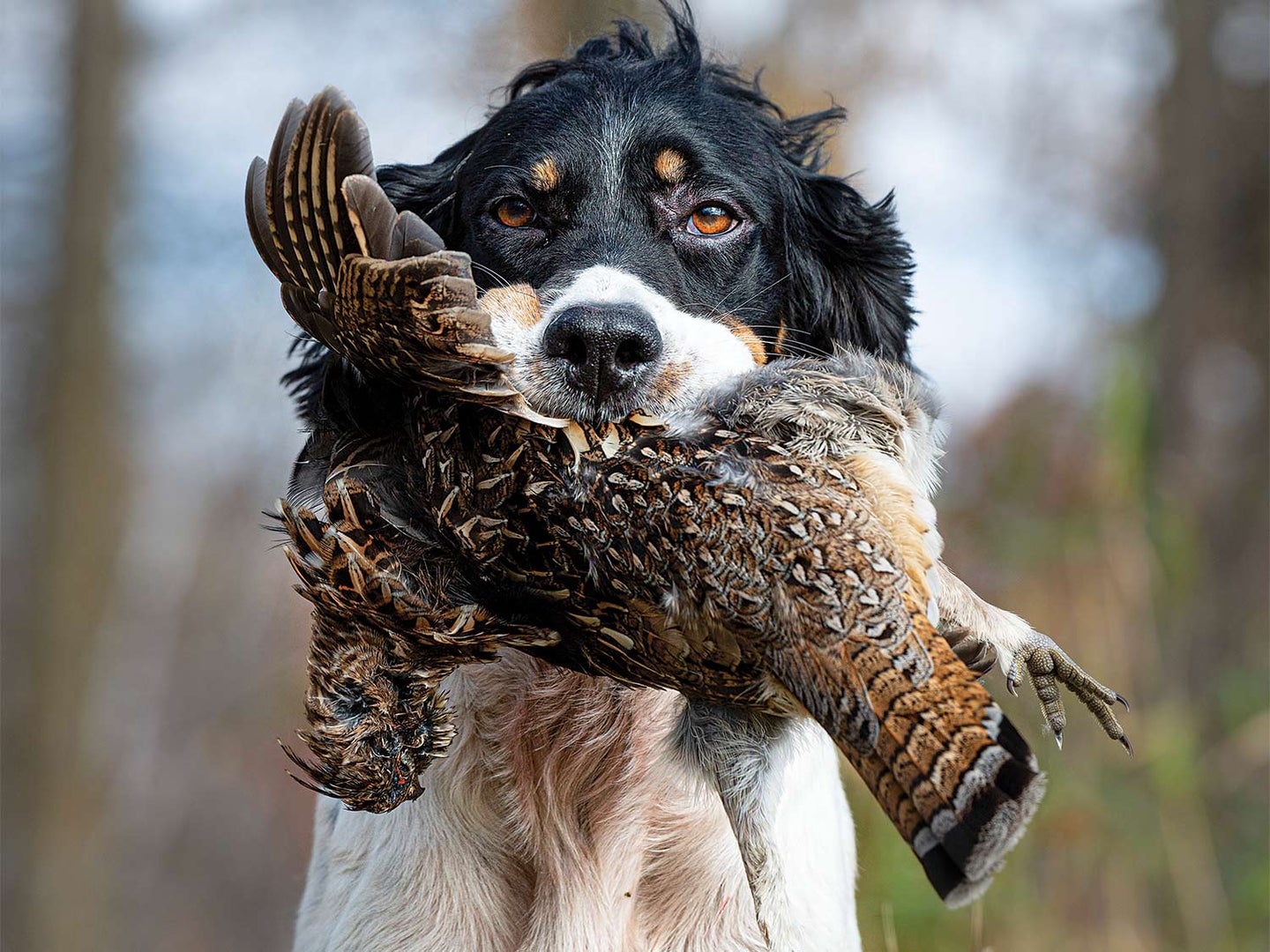 One of my favorite grouse quotes is attributed to author Frank Woolner: “Guns and dogs don’t kill grouse, legs do.”

True, though sometimes killing a limit of ruffies or sharptails is as easy as lacing your boots. Other times, all you have to show for your effort is a face slapped by greenwood branches, arms raked by thorns, and whirring wings beyond a veiling screen of popple. The stories here are about those kinds of grouse hunts, the ones that don’t feature gentle woods or reliable birds. These stories conform to another quote.

“The first time you hunt blue grouse, it’s out of curiosity,” my buddy said, massaging his blistered feet on the tailgate of my pickup. “The next times, it’s for revenge.”—Andrew McKean

For a season in the 1990s, I hunted a ghost. Ostensibly, I was hunting mountain grouse—spruce and blues—along the pumice ridges of Washington’s Cascade mountains. Washington Game & Fish now classifies blue grouse, fittingly, as sooty grouse, and based on the near futility of my experience, it’s hard to think of them as anything but an apparition. But the shotgun was mainly a prop; I was really hunting the long shadow of D.B. Cooper.

In November 1971, wearing sunglasses and a suit jacket, a man known as D.B. Cooper hijacked a 727 airliner between Seattle and Reno. He demanded $200,000 in $20 bills and four parachutes. Then, wearing one of the chutes, he jumped out of the plane somewhere over Mount St. Helens. Neither his body, nor the loot, was ever found.

I figured I could find it. I was a mountain climber. I was a hunter. As a news­paper ­reporter, I was both curious and poor.

I knew from press reports that the search for Cooper centered near Mount St. Helens, which had erupted a decade after Cooper’s jump. I headed to the area with a map and a shotgun.

I followed logging roads where I might flush spruce grouse on my way toward high clear-cuts and blue grouse. I admit that my eyes weren’t on grouse sign so much as they scanned for the tatters of parachutes or the flutter of a weathered black suit.

My first prospecting trip gave me blisters, red welts from stinging nettles, and a burning desire to bag a mountain grouse if not solve the mystery of D.B. Cooper. I returned three times that season, pulling my way up thinning timber to reach the ridges that stairstep toward Mount St. Helens’ stark volcanic cone, dropping into moss-green streams, then back up to the next ridge, deflated by the knowledge that at some point, I’d have to retrace all that terrain to reach my pickup.

But another discovery made me forget about birds. Walking through a stand of uncut timber, I stubbed my boot on something metallic. It was a shovel, and my imagination went into overdrive. It was Cooper’s tool to bury his loot. I started looking for disturbed soil and found a half-dozen more shovels. They all had the initials of the U.S. Forest Service on their shanks, their wooden handles long since rotted away. The shovels had nothing to do with hijacking; this was a cache of unrecovered firefighting equipment.

As I limped off that mountain, I flushed a single grouse, which sailed into the misty blue light that characterizes rare rainless days in the Cascades. Blistered and birdless, I thought of Cooper. Had he survived the landing, he had a long walk out of that steep country. He would have been bruised and furtive, but he would have had two things that I didn’t: money and a story for the ages. —A.M.

2. North Woods Grouse: Paddling for sprucies and ruffs in an unspoiled wilderness

The plan was to paddle our way into Minnesota’s Boundary Waters Canoe Area Wilderness for a few days of hunting and fishing in grouse nirvana. As we staged our gear at the trailhead, optimism ran high.

“The first person down the portage should take a shotgun, in case there are grouse on the trail,” someone suggested. Our crew consisted of experienced paddlers and backcountry adventurers, but by my reckoning, only a few serious bird hunters, including my dog Otis and me. No matter, I thought, there will be plenty of birds for everyone.

The next morning, with the smell of campfire smoke and whiskey still wafting off our clothes, the grouse army assembled, pulling on vests and loading shotguns. Someone had flushed a bird along the trail to the latrine. We fanned out and busted our way through the pines and poplar. Otis got birdy right away, and put up a ruffed grouse ahead of us. The bird flew directly at the hunter next to me. He halfway mounted his shotgun and halfway ducked as the bird whirred over his head and then past me. I fired too quickly and missed.

But still, it counted as a victory. We’d been hunting for only 15 minutes and put up our first bird (there’s a reason diehard grouse hunters count flushes with clickers lashed to their vests). From there we hiked hills, wriggled ourselves over deadfalls, and slogged around marshes for hours without flushing another grouse.

By day two, our army of grouse hunters was reduced to four determined souls, Otis included.

Read Next: These Hunters Have Perfected the Upland Bird Hunting Road Trip

Ruffed grouse like thickets of young poplars and the edges of marshes near mature timber. Spruce grouse like old burned-over areas and dense stands of pine. We hunted dozens of these coverts, flushed a few birds, and killed none. Across the north country, grouse habitat is easy to identify. There are logging cuts, old logging roads, and burned areas. But the Boundary Waters is more than a million acres of wilderness with one patch of cover connecting to the next, on and on forever. That, of course, is the appeal. Here, there are grouse everywhere. And nowhere.

As we looped back to camp, now taking the easiest route instead of hitting the juiciest cover, Otis flushed a bird that once again flew directly at us. I tracked the incoming grouse and was about to squeeze when he casually landed in a tree. I leveled the bead on his head and killed a gorgeous male spruce grouse. My hunting partners whooped and clapped me on the back. Our quest was complete. I didn’t have the heart to tell them I had swatted it from a tree. It was our only grouse of the trip.

That night we roasted the sprucie over the campfire. The meat was rich, dark, delicious—and not at all bitter. —Alex Robinson

3. Prairie Grouse: Extinction: The worst and best excuse for a grouse guide

I live in one of the last strongholds of the imperiled sage grouse. The ocean-wide prairies of northeast Montana are among the few places where hunters have a legitimate chance of bagging this iconic bird, the largest grouse on the continent.

Because I know where to find grouse, I’m inundated with requests for information. I tend to be tight-lipped. After all, these are rare grouse. Besides, my knowledge may be extensive, but it’s also finite, and I don’t want to direct pressure to the same spots.

So, I’m selective in who I take. But one party seemed worth guiding. They were legends of conservation, august leaders who had led national organizations and helped perpetuate our North American system of wildlife management. And they wanted me to lead them to sage grouse.

I happily obliged, after the requisite qualifiers: They’re a ­notoriously scarce bird. We’ll have to walk empty miles across cactus flats and thigh-burning hills. There might be rattlesnakes. Normally, I throw out those cautions just as an insurance policy, because we nearly always ended up with a few birds in an outing.But this crew was game, despite my down-selling, and we spent three fruitless days wearing out their artificial knees and their high-dollar dogs. I simply could not buy a bird. Areas that always produce a covey were lifeless.

Worn out, discouraged, and defeated, we threw in the towel. I felt like a failure, but to my surprise, my guests acted as though they had experienced a minor miracle.

“We had low expectations, and you’ve done nothing but confirm them,” said one, in a graciously cutting conclusion. “At least now we know the conservation work that needs to be done.”

I shook my head. How could an upland hunter spend three bird-less days and count it as a success? It’s taken a few years, but after some empty walks of my own, I now realize that perspective is the most honest outlook on grouse hunting. Guns and dogs don’t kill grouse, and sometimes, neither does walking. —A.M.