Gun Dog Tips: One Reason Your Dog is Breaking Point, and How to Fix It

Some things just make sense and this is one of them. It’s no wonder it took me years to process.... 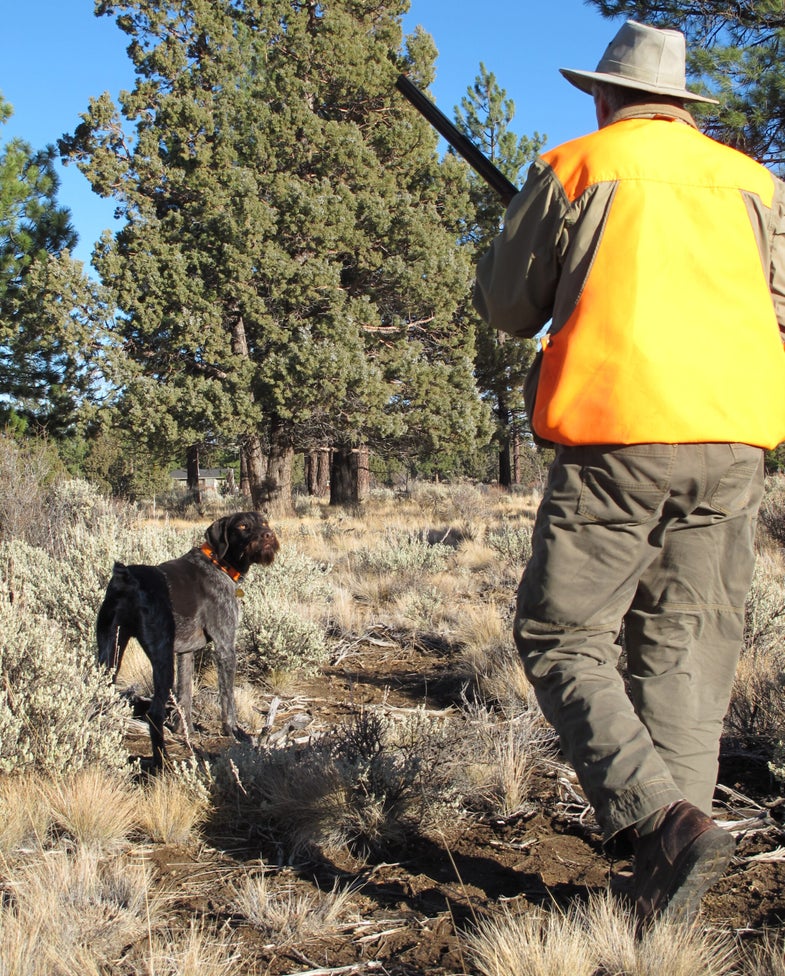 Some things just make sense and this is one of them. It’s no wonder it took me years to process.

If your goal is to own a steady dog that holds his point or, in the case of a flusher, sits until you command a retrieve, then this tip might help—even while a ringneck cackles skyward.

Unlike cats, curiosity probably won’t kill the dog—but it could cause him to break on a flushing bird if he feels like he’s being squeezed out of the action. As a predator, your dog needs, wants, and absolutely must see the bird fly, get shot, and fall to the ground. It’s in his DNA. That’s a good reason to be strategic about dealing with a bird while it’s still on the ground.

Consider this training scenario, which drove home the point vividly: I’d set up the bird in a launcher so it was hidden by tall sage. I brought Manny into the crosswind and he stopped at the first whiff of pigeon, front leg lifted in anticipation of the joy to come. Unfortunately, there was another tall sage close enough to him that he couldn’t see the pigeon when it flew. Wings flapped and he levitated, fortunately landing back on point a couple feet left of the shrub. From this new vantage point, he could see the arc of the flying bird and all was well again.

In this situation, he had no intention of breaking point or chasing the bird. My dog simply needed a vector on it so when time came to retrieve he’d know where to go.

So think about that tall sage, and think about how we do the same thing unconsciously in training and hunting situations, subtly encouraging our dogs to move. Often, it’s our body blocking his view as we move in to fly a pointed bird. On flushing dogs, once “hupped,” we might move in front of him to shoot. In either case, he can’t see the trajectory of the bird, let alone the point at which it landed. At best, every retrieve becomes a blind retrieve. At worst, a dog might leverage his “relocation” into a chase, which seldom ends well.

Observe where you are in relation to your dog when he gets birdy. Throw training bumpers from his side, rather than front. Give him a wide berth when going in to flush a pointed bird. Learn to shoot from your spaniel’s side, not front. Give him a clear, wide-angle view of the situation whenever you can.

Holding a point—or sitting still—with adrenaline flowing and guns blazing is hard enough. It’s understandable that any smart dog would want to know where the flying bird is headed. After all, if things go well, you’ll be asking him to fetch it up.