Sharks will always draw a crowd and the one that 20-year-old Taylor Sears of Scituate, Mass. hung on the dock... 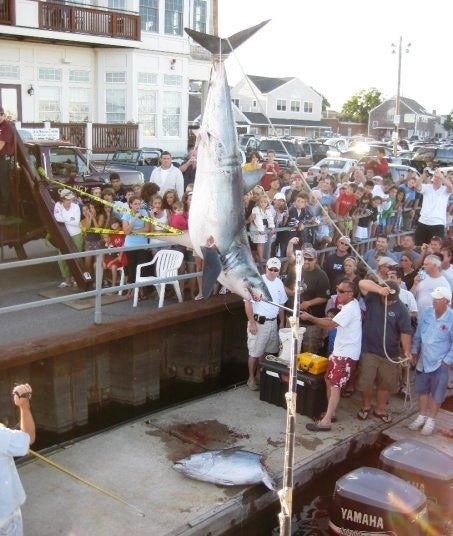 Sharks will always draw a crowd and the one that 20-year-old Taylor Sears of Scituate, Mass. hung on the dock scales the other day was no different. But it was really quite different–perhaps the biggest male mako shark ever caught on a rod and reel.

Sears, a summertime charterboat mate, and crew were fishing for bluefin tuna in the southwest corner of Stellwagon Bank on Thursday when they hooked into a tuna. After a 45-minute fight, the big shark decided that it was time to eat and chomped the tuna in half. A quick re-rig and Sears was shark fishing and hooked the mako within minutes. It took two-hours to boat the 624-pounder.

Whereas many larger makos have been taken on hook and line, most big fish are females. Shark specialist Greg Skomal of the Division of Marine Fisheries, says that the 10-foot fish is the largest ever male mako recorded in the Atlantic Ocean.